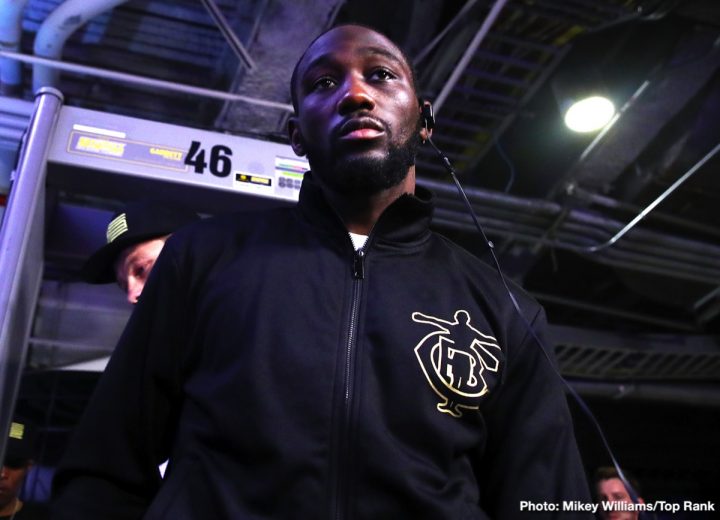 By Chris Williams: Terence Crawford voiced his frustration this week on social about how the top fighters at 147 from Premier Boxing Champions aren’t fighting him. WBO welterweight champion Crawford wants all the top guys from PBC – Manny Pacquiao, Errol Spence, Mikey Garcia, Keith Thurman, Shawn Porter and Danny Garcia to fight him – but none of those matches are happening.

Instead, Crawford is fighting the likes of Amir Khan, Jose Benavidez Jr. and Jeff Horn. Crawford is mostly just fighting guys from his promoter Bob Arum’s Top Rank stable of fighters, but he says he’s capable of fighting PBC guys too.

Crawford (35-0, 26 KOs) says they try to make it sound like there’s two sides of the street with him being on one side with Top Rank, and them being on the other side with PBC. In other words, there’s a barrier that keeps the PBC and Top Rank fighters from facing each other. However, Crawford states that he’s fought PBC fighters in the past in John Molina and Felix Diaz, and those fights happened. As such, Crawford’s theory is that when it comes to PBC allowing their best fighters to face him, they’re not willing to make those fights

They try to make it like it’s two sides of the street and all that. Being that [Luis] Collazo is with PBC, and so is Felix Diaz, and John Molina. I just think when it comes down to their best fighters [Premier Boxing Champions] fighting another network’s best fighters, it becomes a business. And if it doesn’t make sense then why not fight somebody from your own stable. That makes sense,” said Crawford.

Crawford sounds bitter.  Some boxing fans say Crawford, 31, made his choice by re-signing with Top Rank rather than moving on when he promotional contract expired. If Crawford wanted to fight PBC fighters, he could have signed with them recently, and then he’d have little problems fighting all the guys that he’s been wanting to face. Crawford is following in the same footsteps as former world champion Tim Bradley, who chose to re-up with Top Rank rather than signing on with another promoter so that he could get a fight against Floyd Mayweather Jr.

The top PBC fighters would likely cross the pond to face Crawford if he were a popular Pay-Per-View level fighter, but he’s not. To become popular, Crawford needs to face other popular guys, and show that he can beat them. That’s not happening. He’s being matched against Amir Khan, Jose Benavidez Jr. and Jeff Horn.

Crawford hasn’t got much time left

It’s unclear how many years Crawford has left on his current contract with Top Rank. But if it’s between four and six, then he can probably forget about ever fighting talented PBC guys like Pacquiao, Danny Garcia, Thurman, Porter, Spence and Mikey Garcia, because many of them won’t be relevant any longer. Crawford will likely be over-the-hill as well in four to five years.

When Terence’s contract with Top Rank expires someday, he can make the decision whether he wants to stay with them or move on. If he’s satisfied with the guys his promoter is putting him in with, then he’ll stay.  Crawford really hasn’t fought anyone talented yet during his career, and that’s the sad part.

Here are the fighters Crawford has fought in the last five years:

Those are not great fighters or good ones compared to the talented guys at 140 and 147. The top light welterweights Regis Prograis, Josh Taylor and Jose Ramirez would likely obliterate everyone one of those guys that Crawford has fought in the last five years. That’s the problem. Crawford hasn’t proven himself against quality fighters, and yet’s received a lot of hype.

Crawford expected to fight Kavaliauskas next

Terence is expected to face #1 WBO Egidijus Kavaliauskas. That’s a fighter that is coming off of a controversial 10 round draw against Ray Robinson last March. Kavaliauskas appeared to lose that fight, but was given a draw. Crawford will now be fighting him rather than Robinson or one of the talented contenders in the division. Kavaliauskas isn’t a big name, and it won’t help Crawford’s career like it would if he were facing one of the talented PBC fighters.