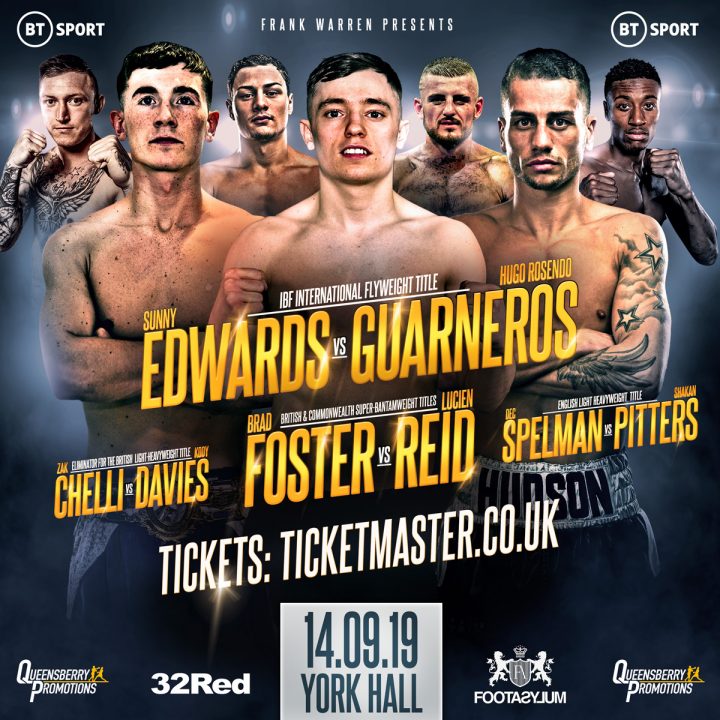 FRANK WARREN and Queensberry Promotions return to York Hall on Saturday September 14 with a triple bill of title fights starring some of British boxing’s finest prospects, live on BT Sport.

And, in a magnificent British light-heavyweight title eliminator, expect fireworks when Zak Chelli (7-0, 3KOs) comes up against Kody Davies (9-0, 3 KOs).

Edwards said: “I must be making a name for myself in Mexico because this is the third boxer from there I’ve faced.

“I haven’t looked at him because I say, ‘Yes’ to any opponent I am offered. As long as my trainer Grant Smith is fine with the opponent, I am.”

Edwards who has been campaigning at super-flyweight added: “Going down to flyweight is another new adventure, but I can make the weight nicely and show what I am all about.”

Lichfield’s Foster, 21, won the British title by beating Josh Wale on points in March before stopping Ashley Lane in the final round at Stevenage in May.

“He is a good fighter and I don’t expect anything less with him fighting me for the British title,” said the champion of his challenger.

“He’s had a good amateur background and knows how to fight, so I will have to be at my best and I know I will win on the night.”

Reid, who recently teamed up with new trainer Alan Smith in Bromley said: “I now have the perfect team to capitalise and winning this title will mean so much.

“Brad is accomplished and well schooled, but I have boxed his style and every other one all over the world as an amateur. That will be the difference in this fight.”

Spelman will be seeking revenge after losing to Pitters last November in a Ultimate Boxxer competition, which his rival eventually won.

Scunthorpe’s Spelman said: “We fought over three rounds and obviously tasted a bit of each other, so we know what we are both about and it will be interesting. I am looking forward to it.

“That is where I feel comfy over the longer distance. I am mentally strong, I hit hard and carry my power all the way through.”

Birmingham’s Pitters added: “What happened at Ultimate Boxxer counts for nothing and I am not even thinking of that win against Dec.

“I’m just grateful for the opportunity and commend Dec for picking me as a defence, because there are easier fights.”

Fulham’s Chelli who never shirks a challenge has now moved up to light-heavyweight.

Now he comes up against former Team GB elite amateur Davies, who has also made an impressive and unbeaten start in the pro ranks.

Chelli says: ”Basically I am 21 and still growing. The weight was an issue for me in the Umar Sadiq fight and it was an even bigger issue against Jimmy Smith, but I wanted that title.

“I like to have these fights against undefeated boxers. It is exciting and it is what the public want. They don’t want a predictable fight, do they?

Emerging Welsh prospect Davies, 25, added: “I’m over the moon with this fight being made.

“Thanks to SJAM & Frank Warren For making it happen. Everyone is finally gonna see what a focused, motivated Kody Davies is capable of, and it’s far more than domestic level.

“This is a nice little stepping stone for me and a nice route to burst onto bigger title fights.”

THE LONG RUNNING quest of Lucien Reid to become involved in title fights certainly rings true with the old saying about London buses.

Reid has been waiting, impatiently, for a title opportunity to come along then all of a sudden, like the buses, two have arrived at once.

‘Lethal’ Lucien, 25, will challenge for the British and Commonwealth super bantamweight titles held by Brad Foster when the pair meet at York Hall on September 14, live on BT Sport.

It is just reward for the 8-0-1 former amateur standout who has recently changed his training location from the base of Adam Booth in Redhill to Alan Smith’s thriving gym in Bromley.

After being kept waiting at the shelter for a lengthy period, Reid almost reached the point of believing his boxing bus would not ultimately arrive.

“I did, I’ve been calling for a title fight for years because, not being funny, with my amateur background I have done everything, boxed all different styles and I know what I am capable of,” explained the Hackney-born Reid, who made his professional debut in May 2015.

“To be honest, boxing journeyman-type opponents left me not getting up for it and that is why in my last fight (against the 9-1 Indi Sangha) I was happy to be up against someone with a good record.

“I want titles as I have a boy, who is six now, and he doesn’t care about me winning fights, he just wants me to have belts. I now just want to be one of those dads who can show off to him.”

Reid, who has previously been nominated for Southern Area and English honours that have not come to fruition, accepts he is probably not everybody’s ideal choice for when it comes to putting titles on the line.

“I think I have been too much of a risk for a champion to fight me with not much of a reward. Especially if they are not with Frank Warren. Why would they take a fight knowing they are going to lose?” added Reid, who suffered the only blemish to his record last time out against Sangha when the fight was stopped in the third round due to him sustaining a nasty cut above his right eye.

However, the fact that a double-title encounter comes next shows that no long-term harm was done to his prospects.

“It was annoying and, at the time, I was devastated, obviously. I was into my flow and feeling good, but now it looks like a blessing in disguise because look what has come from it.

“I’m hoping Brad Foster looked at that fight and thought ‘this will be easy’. That wasn’t how I box normally and everything is changing.”