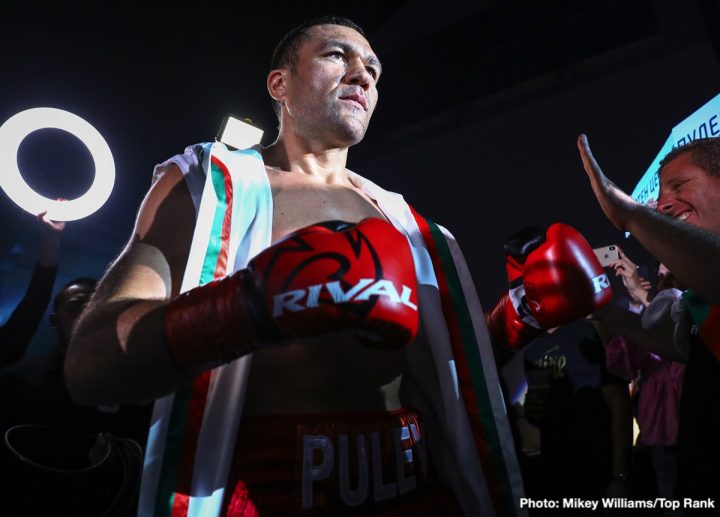 IBF #1-rated heavyweight contender Kubrat “The Cobra” Pulev has responded to former unified WBA, IBF, and WBO (and current Lineal) Heavyweight Champion Tyson Fury’s public claims that he turned down a fight with “The Gypsy King.”

Pulev asserts it is the exact opposite situation, in fact.

“Fury is using me and some other boxers that he knows are currently unavailable for different reasons, just so he can get some PR,” said Pulev. “A few years ago, Fury refused a fight with me and not because he wasn’t available like I am right now. He was available. He was just scared!”

By winning a unanimous decision over Fury’s cousin Hughie last October, Pulev became the mandatory next fight for the winner of the upcoming Ruiz vs. Joshua rematch.

Fury made the claim that Pulev is afraid to fight while justifying facing his next opponent, lesser-known Swedish heavyweight Otto Wallin on September 14 in Las Vegas.

“My first goal is to become a world champion,” continued the Bulgarian slugger, “not to just fight random unknown opponents like he’s doing! Winning those belts are my main focus right now. Fury’s turn will come and, when it does, I will make him just as powerless as his cousin, who also used to talk a lot.”

Bulgarian IBF #1-rated heavyweight contender Kubrat “The Cobra” Pulev and his team have officially petitioned the IBF, requesting they order their world champion, Andy Ruiz, to postpone his rematch with former champ Anthony Joshua and make an immediate mandatory defense against Pulev.

Team Pulev say their fighter has earned the right to an immediate title fight by winning two IBF eliminators (October 27, 2018, when he defeated IBF #3-rated Hughie Fury and May 7, 2016, when he defeated former European champion and world title challenger Dereck Chisora) and by staying active against top competition. For example, on March 23 of this year, he knocked out WBA #14-rated Bogdan Dinu on ESPN.

Pulev had originally been scheduled to face then-champion Anthony Joshua on October 28, 2017, in Cardiff, Wales, but was forced to withdraw due to injury. Joshua went on to defeat substitute opponent Carlos Takam and then make two more defenses then lose to Ruiz by TKO 7 in June of this year without facing Pulev.

And now, even though long-time IBF mandatory challenger Pulev has re-earned his spot as the IBF mandatory by beating Fury, Joshua’s promoter, Eddie Hearn of Matchroom Boxing has made clear he and Joshua intend to exercise their contractual right to an immediate rematch against Ruiz.

“We’ve been waiting patiently. The time is now,” said Bob Arum, founder and CEO of Top Rank, which co-promotes Pulev along with Epic Sports. “Andy Ruiz has an obligation to fight #1 mandatory IBF contender Kubrat Pulev.”

“Eddie is running this heavyweight title like it’s his own private enterprise,” said Ivaylo Gotzev of Epic Sports. “The bottom line is, Pulev originally fought an IBF eliminator over three years ago and was next in line with his IBF mandatory status. The IBF is an organization that has set a precedent for following their written rules and, according to rule 5.A.1., Ruiz’s rematch clause against Joshua does not affect his obligation to defend his title against the IBF leading available contender. Mandatory obligations supersede a promoter’s promotional rights. The IBF should not set aside their rules over the contractual details of a past fight.”

Ruiz himself is an indirect beneficiary of the IBF’s respected reputation for strictly adhering to its rules.

When Tyson Fury defeated Wladimir Klitschko to win the IBF title, the Klitschko camp exercised its contractual right to an immediate rematch with Fury. When Fury then refused to fight his IBF mandatory, opting for the more lucrative rematch with Klitschko, the IBF correctly vacated the title and ordered the two leading available contenders, Vyacheslav Glazkov and Charles Martin, to fight for the vacant IBF title.

Martin defeated Glazkov to become the IBF champion. In Martin’s first defense of the IBF title, he lost to Joshua which in fact was Joshua’s first bout for a major heavyweight title. Ruiz, who has now acquired the IBF title by defeating Joshua, is therefore the indirect beneficiary of the IBF’s policy of strictly complying with its rules, and Ruiz should therefore also be held to the IBF Rules and ordered to fight the IBF No. 1 available contender, Pulev, in his next bout.”

In another example, superstar fighter Gennady Golovkin was stripped of his IBF middleweight title in 2018 after choosing to face Vanes Martirosyan and failing to set up a mandatory defense against Ukrainian Sergiy Derevyanchenko. Daniel Jacobs then won the title by beating Derevyanchenko in a fight for the vacant belt.

“I was ready to face Anthony Joshua in November and now I’m eager to challenge Andy Ruiz,” said Pulev. I will fight Ruiz anywhere in the world. Let’s make it happen.”

“Two months have gone by since the Joshua bubble burst,” continued Gotzev. “No deal has been confirmed, only the occasional blurb by Eddie Hearn, of potential site and really no particular date. Eddie Hearn was talking to us for a November date at Wembley Stadium and Andy Ruiz ruined those plans. Andy is the new face of heavyweight boxing and we respect his fighting abilities. Pulev vs Ruiz will be a formidable battle.”