Kellerman: Pacquiao could be best pound-for-pound fighter ever 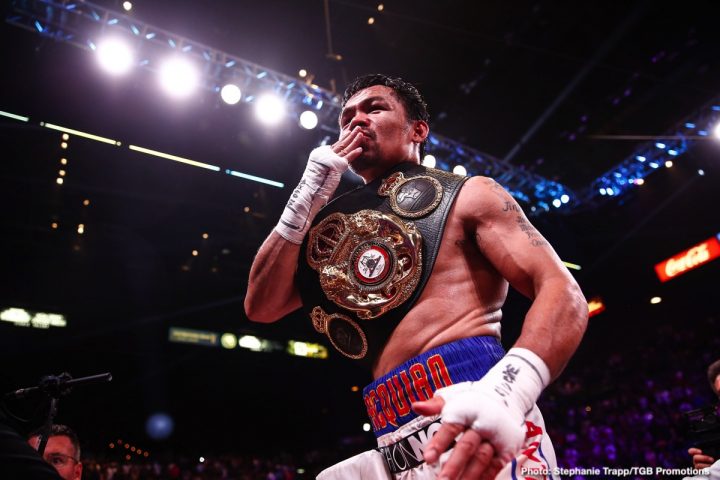 By Mark Eisner:  Max Kellerman believes that Manny Pacquiao has achieved enough during his 24-year career in the sport of boxing for him to make an argument that he should be considered #1 pound-for-pound as the greatest fighter ever in the sport.

Pacquiao (62-7-2, 39 KOs) has done something that no other fighter has ever achieved in winning world titles in eight divisions. Although Pacquiao has lost from time to time, it’s been against fighters that were naturally bigger than him like Floyd Mayweather Jr. and Jeff Horn.

Lomachenko not in the same league as Pacquiao

In this current post-Mayweather era, Vasiliy Lomachenko has given a lot of praise by boxing fans and by his promoter Bob Arum of Top Rank. However, Lomachenko has won world titles in three weight classes – 126, 130 and 135 – and he’s shown no interest in vying for a 4th or 5th division world titles by moving up to 140 or 147. Lomachenko is the same size as Pacquiao, but he’s not as fast, powerful or as explosive

“He has a case for greatest fighter pound-for-pound who ever lived,” said Kellerman on Max on Boxing in talking about Pacquiao. “I don’t think he wins that argument. Sugar Ray Robinson is safely ensconced in that position, but Henry Armstrong, Muhammad Ali, Sam Langford, Harry Greb, Floyd Mayweather, Pernell Whitaker; who else do you want to mention? Put Pacquiao’s resume up to those guys. For Pacquiao, take his peak. Was it at 140 when he obliterated Ricky Hatton, Miguel Cotto and Oscar De La Hoya, although that was at 147. Was that Pacquiao’s peak? Remember, that was when the Mayweather-Pacquiao hype actually reached it’s fever pitch. ‘These are the two best fighters we’ve ever seen, and they’e both in their primes, in the same weight class at the same time. We have to see them fight,'” said Kellerman.

Pacquiao’s peak was just about as good as anyone’s in history. Now I would have favored Mayweather back then. He’s the notably larger fighter, and that’s the point. When you talk about pound-for-pound, when a fighter moves up out of his natural weight class, and can still compete with the best that ever did it, what does that mean about the quality of that fighter’s prime pound-for-pound? And then when you look at the fighter’s accomplishments, Pacquiao is 40-years-old, who just beat as I mentioned the third best welterweight in the division [Keith Thurman]. Really, Pacquiao is the third best welterweight in the division,” said Kellerman.

Just based on Pacquiao winning world titles in eight divisions, it’s dificult to not view him as the #1 pound-for-pound fighter of all time. Guys like Sugar Ray Robinson, Pernell Whitaker and Muhammad Ali were highly talented, but they didn’t win as many division world titles as Pacquiao.

“Do you realize he turned pro at 16, and not even five foot tall, and not even 100 pounds,” said Kellerman in talking about Pacquiao’s early career. “He won his first lineal title a couple of years later at flyweight He didn’t turn pro at flyweight. He won his first real championship of the world, and then skipped up a couple of weight classes, and then started tearing through the divisions.

As a late minute replacement against Lehlohonolo Ledwaba, who was considered a guy on the rise on the pound-for-pound list, a top 10 guy, a heavy favorite, and Pacquiao destroyed him in such a way that we wondered what could be do against Marco Antonio Barrera. ‘Let’s not get ahead of ourselves. Barrera might be a little long in the tooth, but hes still one of the best ever.’ Pacquiao, what he did to Barrera was scary, the way he dominated Barrera. It’s the kind of fight I’ll never forget watching. I’ve rarely seen a performance like that.

Mayweather had a considerable size and reach advantage over Pacquiao. Floyd started his career out at super featherweight. Pacquiao started at minimumweight.

There’s been a lot of talk for a long time who’s who. Who’s being eliminated? He’s still one of the best,” Porter said about Thurman. “He’s not #1. Pretty soon you’re going to see two guys inside the ring. You’re going to know who’s #1 there. For sure, I don’t think there’s any other fighter out there that’s better for me than Manny Pacquiao,” said Porter.

Porter makes a good point in rating Pacquiao at #1 in the welterweight division, because he just beat the previous unbeaten #1 fighter at 147 in Keith Thurman. Just based off that win, Pacquiao should be considered #1 at welterweight.

“I will be ready for this one,” said Porter about his September 28 fight against Errol Spence Jr. “I’ve heard all the comments from him about how I’m too little , and how he’s going to knock me out. To me, that’s silly stuff. That’s what some guys need to tell themselves to get themselves up and ready for a fight. I don’t have to do that. I just need to do what I do well, and I need to make him uncomfortable. You’ll definitely see Errol Spence uncomfortable as you’ve ever seen him in the ring. He came with an approach not too many guys have come before,” said Porter in talking about Spence trash talking him at their kickoff news conference.

“He came with the approach, ‘I’m going to to knock you out,’ and he told me that he hopes I’m going to try and box him from the outside,” said Porter about Spence. “It’s little things like that. I’m thinking to myself, ‘this is for the cameras.’ Why do you have to talk right now? Why are you even saying these things to me? You don’t think I know you want to knock me out? You don’t think I don’t know you want me to box from the outside? So for him to say these things in the moment is letting me know he’s trying to tell me some things, and remind himself that he really needs to get ready for this fight,” said Porter.

Shawn must try and make Spence uncomfortable for him to have a shot at winning. IBF welterweight champion Spence (25-0, 21 KOs) and WBC champ Porter (30-2-1, 17 KOs) will be fighting on September 28 on Fox Sports pay-per-view. Spence is considered the favorite right now.

Porter says Spence won’t have success against him

“He’s a fighter. He’s a dog. I know he believes it, but I think he’s trying to intimidate me and make a point,” said Porter in discussing his fight with Spence. “But for me, we’re just smiling and looking at each other to take pictures. I don’t need to say anything to you right now. As always, I let my fists do the talking inside the ring. For a southpaw, he has really high skills.

He’s talented. I think a lot of that is because he’s a southpaw. When you see he’s uncomfortable, when you see the things that worked for him before don’t work for him anymore against me, then you’ll start to understand Shawn Porter is taking advantage of his southpaw stance, and isn’t allowing Errol Spence to be comfortable to use his southpaw stance to his advantage,” said Porter.

Preparation will be key to beating Spence says Porter

If you start a list, and start clicking things off, you’re going to see he can’t do this against Shawn Porter; he can’t do that against Shawn Porter. I see it all. and I see me out-boxing him. Yeah, I see me counter-punching him, and taking away his power. I see me landing some really heavy punches on him, and being aggressive to the point where it’s really uncomfortable for him. This guy is good, but Shawn Porter is a little bit better than him tonight,” said Porter.

Former IBF welterweight champion Kell Brook had success against Spence by boxing him from the outside, and throwing fast combinations. That worked until Brook suffered an eye injury in the sixth round of their fight in 2017.  It was all downhill from there for Brook.