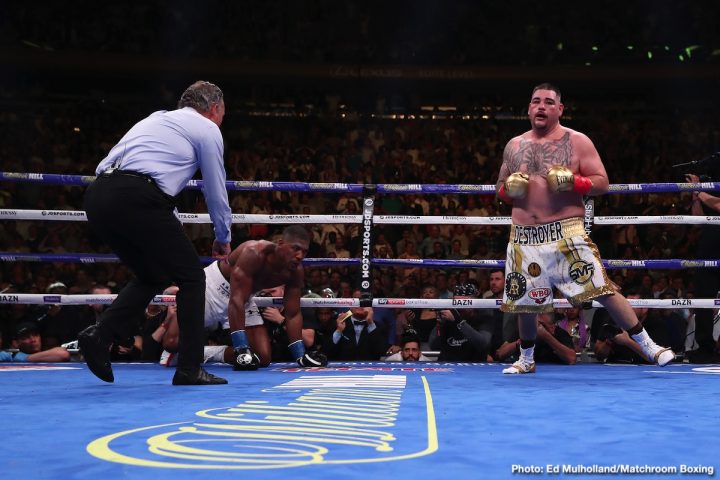 By Charles Brun: Anthony Joshua has entirely ruled out taking a warm-up fight before a rematch with Andy Ruiz later this year. Joshua (22-1, 21 KOs) that anyone that is saying that he should take a different path to a rematch with Ruiz Jr. isn’t “cut from the same cloth” as him in speaking to Sky Sports News. In other words, Joshua thinks he’s making the right move in going straight into the rematch with IBF/WBA/WBO heavyweight champion Ruiz (33-1, 22 KOs).

Fans think Joshua has lost the plot, and is about to make a foolish move that he won’t soon forget.  Although Joshua isn’t going to say it, his likely motive for wanting to face Ruiz Jr. immediately is the time limit involved in the rematch clause.

If Joshua waits too long, then his rematch clause could be useless. That means he would need to give Ruiz better terms in the negotiations for the second fight. The way things are now, purse split, and who gets to choose the venue, is said to be in the rematch clause from the June 1 fight between Joshua and Ruiz.

“Anyone who tells me different, they ain’t cut from the same cloth. Who’s my warm-up going to be? I don’t fight B-class, I’m fighting the best, so I’m going straight for them titles,” said a defiant sounding Joshua to Sky Sports News. “Ruiz, I’ve seen he’s done a lot of talking about what he wants, but he don’t call the shots in that sense, it’s a team effort.”

When Joshua says that anyone telling him not to take a rematch straightaway with Ruiz that they’re not “cut from the same cloth,” he might be complimenting them. It’s clearly a wrong-headed idea on Joshua’s part to fight Ruiz without taking a tune-up first. It’s impulse based decision on Joshua’s part. Of course, what makes it easier for Joshua to make that move is the huge money he’s made in the sport.

Even if Joshua loses again, he still can walk away from the sport incredibly wealthy. He’s not like a like normal fighter, who would want to make sure he was ready for a rematch, because he might not ever get another shot. Being wealthy gives Joshua the freedom to take risks that seem irresponsible.

Ruiz was supposed to have been an easy fight for Joshua

Joshua letting his boxing fans know he won’t fight a B-level fighter in a tune-up, even though his originally scheduled opponent Jarrell ‘Big Baby’ Miller fit that definition. Andy Ruiz was picked from the bottom of the IBF’s rankings at the #15 spot for Joshua to fight. Ruiz was never expected to beat Joshua, but he did for whatever reason. Joshua either overlooked Ruiz or he simply wasn’t good enough to beat him. A lot of boxing fans believe that Ruiz wouldn’t be able to compete with WBC heavyweight champion Deontay Wilder or lineal champion Tyson Fury. Joshua and his promoter Eddie Hearn of Matchroom thought that Ruiz was a winnable fight, which why he was picked out.

The rematch between Joshua and Ruiz is being talked about taking place in November in Cardiff, Wales. Although Joshua floated the idea of facing Ruiz in Mexico, he immediately followed by saying he wants the rematch in Cardiff, Wales. There’s where most boxing fans believe it’ll take place. Joshua talks tough about how he’s willing to fight anywhere, but he doesn’t look ready to do that. Joshua looks to be shot after his loss to Ruiz. He seems like a broken fighter, who absolutely needs the fight to take place at home in the UK.

AJ needs to go after Ruiz early to get the win

Joshua’s best chance of winning the rematch is for him to bum rush Ruiz fight from the start, and hope he can nail him with a big shot. If Joshua doesn’t do that, Ruiz will repeat what he did last time by unloading on him with combinations, and take him out. Joshua’s stamina is so poor that he won’t be able to hang with Ruiz for more than three fast paced rounds before he empties his gas tank, and is on rubber legs like last time.  Ruiz will be vulnerable with an all out assault by Joshua.

With the fight taking place in the UK, Joshua might get a stoppage just by throwing a handful of punches at Ruiz. In Joshua’s fight with Carlos Takam in Cardiff, he threw some shots in the 10th, and the referee jumped in an stopped it. Takam was fine. It looked like the referee had made up his mind that he was going to stop the fight earlier in the round, and he just went through with it despite the fact that Takam was hitting a tired looking Joshua back.