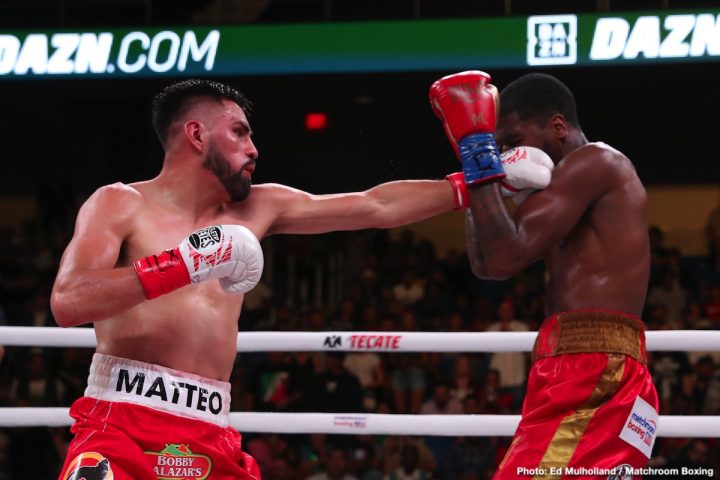 By Kenneth Friedman: Jose Ramirez and Jack Catterall have been ordered to start negotiations by the WBO for a mandatory defense of Ramirez’s World Boxing Organization light welterweight title. Catterall (24-0, 13 KOs) and the unbeaten Ramirez (25-0, 17 KOs) have thirty days to negotiate the fight before a purse bid is ordered next month on the 5th of September.

Ramirez, 26, may not be excited at defending his WBC & WBO light welterweight title against a fighter from overseas in Catterall, but he inherited him as his mandatory when he defeated WBO 140 pound champion Maurice Hooker ( 26-1-3, 17 KOs) by a sixth round knockout last month on July 27 at the College Park Center, in Arlington, Texas.

Jose Carlos Ramirez had his WBC title on the line in facing WBO belt holder Hooker in a unification fight promoted by Top Rank Boxing and Matchroom Sport. Ramirez walked Hooker down, and took him out with flurry of shots in the sixth round after he hurt him with a left hook to the head. Hooker, 29, was the easy mark for Ramirez to beat in terms of the 140 pound champions in the weight class. The tougher obstacles for Ramirez are the dangerous IBF belt holder Josh Taylor and WBA champion Regis Prograis.

Jack has looked good recently in breezing through fights against Oscar Amador, Ohara Davies, Tyrone McKenna, Christopher Sebire and Kevin McCauley. Catterall’s wins over Davies an McKenna were both hard-fought affairs, but he proved to be too good for both of those guys. In the 26-year-old Catterall’s last fight, he defeated Nicaraguan journeyman Amador (10-21, 1 KOs) by a third round knockout last April.

Catterall is too good to be matched up against that level of opposition, but that’s who his promoters wanted to put him in with at the time. He’d already earned his mandatory position with the WBO, so there wasn’t any reason for him to take a chance against one of the talented fighter sin the light welterweight division.

The lack of punching power for Catterall is going to make it difficult for him to beat Ramirez. The southpaw Catterall likes to go on the attack in his fights, and he’s able to get away with this because he’s not been facing punchers. Catterall’s fighting style is made to order for Ramirez. It’s the perfect style for him to fight.

This will be a good warm-up for Ramirez to get ready to fight the winner of the Prograis vs. Taylor fight. Catterall is a southpaw like those two fighters, and Ramirez can get some practice getting ready for the winner of that fight.

Ramirez will need to find another gear to his game for him to beat Taylor and Prograis. Those guys aren’t just going to cover up on the ropes, and let Ramirez blast away at them the way Hooker did. Top Rank, the promoters for Ramirez, haven’t shown a lot of enthusiasm at putting him in with Prograis. If Taylor wins the World Boxing Super Series tournament, Top Rank will likely show the same reluctance in letting Ramirez fight him too.

The way Taylor and Prograis are looking right now, Ramirez is going to be food for either of them. He’s arguably the equivalent of Catterall in facing either of those guys. That’s why it’s very likely that Top Rank will drag their feet when it comes to matching Ramirez against the winner of the Prograis vs. Taylor fight. It’s very possible that Top Rank will come up with a reason why they won’t match Ramirez up against the winner of that fight.