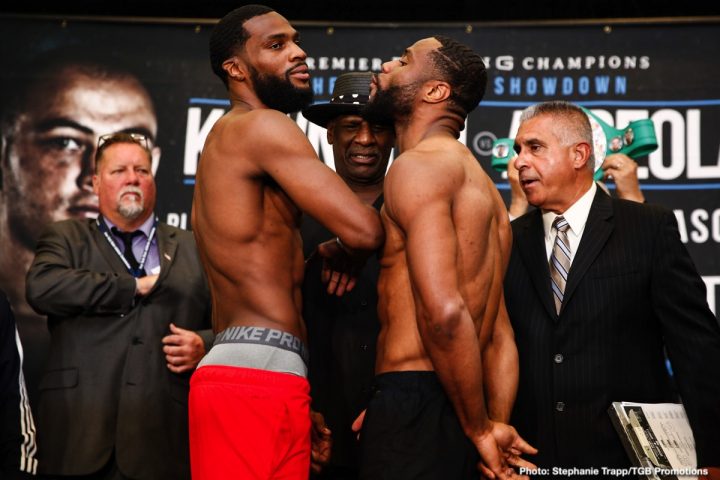 By Barry Holbrook: Jean Pascal isn’t worried about interim WBA light heavyweight champion Marcus Browne and his tough talk about wanting to knock him out tonight on Fox and Fox Deportes at the Barclays Center in Brooklyn, New York. Pascal, 36, and Browne will be fighting on the undercard of Adam Kownacki vs. Chris Arreola. There’s a very good chance that the Browne vs. Pascal fight could wind up taking the spotlight away from the headline fight between those two chunky, slow-moving heavyweights.

Pascal (33-6-1, 20 KOs) sees Browne as not being as good as the hype that’s out there about him. Browne has gained a lot of attention from his wins over Sean Monaghan, Radivoje Kalajdzic and Badou Jack. Browne didn’t perform as well as should have in his controversial eight round split decision victory over Kalajdzic in 2016, and the fifth round knockout victory Artur Beterbiev scored over the same fighter last May. Beterbiev’s stoppage win over Kalajdzic came three years after Browne struggled to beat him, but one gets the sense that the outcome would have better the same if the Russian fighter had fought him three years earlier.

Beterbiev is clearly a more powerful puncher than Browne, and a lot better at knocking guys out. That doesn’t mean that Browne isn’t a good fighter. He’s good, but he’s just not at the level of someone like Beterbiev at this time.

He’s not worried about Browne (23-0, 16 KOs) knocking him out on Saturday night, because thinks he’s going to run and hold like he did in his fight against Badou Jack recently Pascal thinks the sole reason why Browne won the fight is because of how badly Jack was cut from a clash of heads early on.

“Marcus has been saying that he’s going to go in there and try to knock me out, but I’m no amateur. I know what his game plan is going to be. He’s going to run around the ring and try to hold. We all know he’s the best at running like a chicken,” said Pascal. “When I was Marcus’ age, I was already a world champion. How is he going to knock me out? I think without the cut that Badou Jack had in their fight, he would have knocked Marcus out. I’m too good all-around for Marcus. This is my chance to show that I still have a lot of gas left in the tank. I’m still good enough to fight at the very top level of the sport.”

Browne, 28, is definitely trailing the accomplishments that Pascal achieved at an early age in his career, but it’s a different era. The light heavyweight division has improved since Pascal captured a world title two years ago in defeating Adrian Diaconu by a 12 round unanimous decision in 2009. What’s important to note is Pascal hasn’t won a world title since losing his WBC belt to Bernard Hopkins in 2011. The 175 pound division has gotten so much better since then.

Pascal has had three chances to re-capture a world title at light heavyweight against Sergey Kovalev [x 2] and Dmitry Bivol, and he’s failed each time. In fairness to Pascal, Browne would likely have lost to both of those guys if he fought them when Pascal did. Kovalev was at the top of his game when he beat Pascal in 2015 and 2016. The way Bivol is looking right now, Browne wouldn’t stand a chance of beating him. Bivol is too good right now, and he doesn’t possess any flaws. Browne isn’t a a full world champion. He’s still an interim WBA light heavyweight champion. For Browne to win the full WBA belt, he’s going to need to take on the 28-year-old Bivol (16-0, 11 KOs).

That’s probably not a good idea, because Bivol is in his prime right now, and not someone that is going to be beaten by anyone at this point in time. Browne would be better off giving up his interim WBA title, and instead going after WBC champion Oleksandr Gvozdyk or WBO champ Kovalev. Browne matches up well with Kovalev, and he would have a good chance of beating Gvozdyk if he didn’t get knocked out by him. Gvozdyk is with Top Rank, so it’s not likely Browne could get a fight against him though.

“I’m going to punish Pascal on Saturday. If the knockout is how he wants to go, I’ll be ready. I promise I’m going to beat him for 12 rounds,” said Browne. “It feels great to be here defending my belt. I’ll be in a better position after this fight. I’m going to make a statement in this fight and put Pascal in his place.”

Browne, 28, will very likely win this fight tonight, but he’s going to know he’s been in a scrap, because Pascal isn’t someone that just rolls over on his opponents. He usually gives his opponents a good fight. At 36, Pascal still has all the same punching power that he had earlier in his career, and that makes him dangerous for a guy like Browne. Pascal isn’t as fast as he once was, but he’s fast enough to give Browne something to think about. The 6’1 1/2″ Browne’s thee inch height and three inch reach advantage over the 5’10 1/2″ Pascal could be a factor in this fight.

Marcus isn’t significantly faster, and his punching power isn’t any better than Pascal. The only real differences between the two fighters is Browne’s youth and size advantage. The youth and mobility of Browne are the two ingredients that sets him apart from Pascal. Browne moves well around the ring to elude his opponents, and he’ll do that tonight. He won’t run from Pascal, but you can bet that he’ll make sure that he gets out of harm’s way when he needs to.

Browne’s best wins have come against these fighters:

Browne will out-box Pascal using his height, reach and mobility to win a decisive 12 round unanimous decision tonight. We won’t see  a knockout, because Browne isn’t going to put himself in the position where he can be hit by Pascal.

Kellerman: Pacquiao could be best pound-for-pound fighter ever »