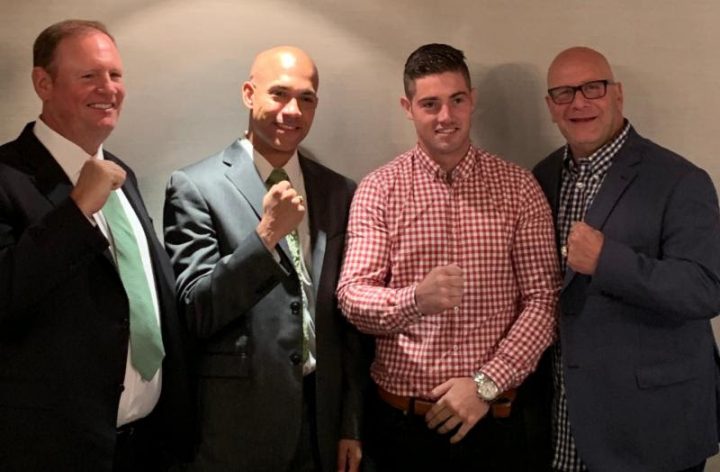 Irish amateur boxing star Joe Ward is headed toward the professional ranks and has announced a stellar lineup of partners to launch his career. The 25-year-old Ward, a native of Westmeath, Ireland, has signed a co-promotional agreement with DiBella Entertainment, of New York City, and Boston-based Murphys Boxing.

Ward is managed by Times Square Boxing Co., based in New York City. Additionally, Ward has retained the services of the acclaimed Buddy McGirt to serve as his trainer alongside Irishman Jimmy Payne. Details of his professional debut will be announced shortly.

In his most recent international amateur tournament, Ward earned the silver medal at the 2017 World Amateur Championships in Hamburg, Germany. Competing for the British Lionhearts in the World Series of Boxing, Ward compiled a record of 8-1 with a 2018 ranking ahead of Cuba’s two-time Olympic champion Julio La Cruz.

“I’m excited to begin my professional journey with a strong team of managers, coaches and promoters,” said Ward. “I’m excited to represent my country in the professional ranks and bring a world championship home to Ireland. I believe it is important to surround yourself with the right people and I found great partners in Joe Winters and Adam Glenn at Times Square Boxing, who understand the sport and business of boxing. I immediately connected with Joe Winters and the fact that Joe’s mom was from Ireland and he still has a lot of family in Ireland.

“Times Square Boxing has already helped in guiding me, by putting together an excellent team of coaches and promoters, which I believe will help me achieve my ultimate goal of becoming a world champion,” continued Ward. “Lou DiBella and Ken Casey have a great history of working with Irish fighters and developing champions. I feel like they really took an interest in me and will give me the support and platform that I need to achieve my goals. I’m excited to have them as part of my team and I’m looking forward to the future.”

“Joe Ward is a potential superstar, an Irish boxing hero and a great young man,” said Lou DiBella, President of DiBella Entertainment. “I look forward to co-promoting him with my good friend Ken Casey and Murphys Boxing. This is the first time that DiBella Entertainment will co-promote a fighter’s career with Ken, who is a legend himself with the Dropkick Murphys. Joe Winters is an accomplished businessman from an Irish boxing family. He’s a philanthropist and person of integrity. Adam Glenn was born into the sport of boxing and his dad, Jimmy Glenn, is not only like family to me, he’s a New York boxing institution. I don’t think Joe Ward could have a better team; working together, we’re confident we can help him achieve great things in our sport.”

“It’s an honor to be involved with such a class fighter and person,” said Ken Casey, head of Murphys Boxing. “We have a great team and a great plan to keep Joe busy and fighting for a world title in no time.”

“I’m very excited to be a part of this team and to work with a world class talent like Joe Ward,” said trainer Buddy McGirt. “This young man has a bright future. Joe has been a very successful amateur and I can’t wait to start working with him and develop him into a world champion.”

The former two-division world champion McGirt was inducted into the International Boxing Hall of Fame earlier this year. In 2002, McGirt was named the “Trainer of the Year” by the Boxing Writers Association of America. Among the notable world champions McGirt has trained include Arturo Gatti, Sergey Kovalev, Antonio Tarver, Hasim Rahman and Paulie Malignaggi.

“We are excited to be working with DiBella Entertainment and Murphys Boxing,” said Joe Winters, Chairman of Times Square Boxing. “I have always had a great working relationship with Lou DiBella. He genuinely cares about the fighters he represents. His skills and expertise will be beneficial in Joe Ward’s quest to become a world champion.

“Joe Ward is a rare talent that only comes along once in a generation,” continued Winters. “We are excited for Joe’s future. We believe he will become a superstar and a future world champion. He is a great young fighter and a dedicated family man. Joe is good for the sport of boxing and he will continue to make Ireland proud.”

“We were delighted to welcome Joe Ward to the Times Square Boxing Team and we are incredibly excited about his future,” said Adam Glenn, CEO of Times Square Boxing. “Everyone knows that Joe is one of the most talented prospects in the world today, but we truly believe his authenticity, charisma and character are going to make him a star. We have put an amazing team behind Joe, between Buddy McGirt, Jimmy Payne and the combination of Lou DiBella and Ken Casey, and we can’t wait to begin his journey toward a world championship.”