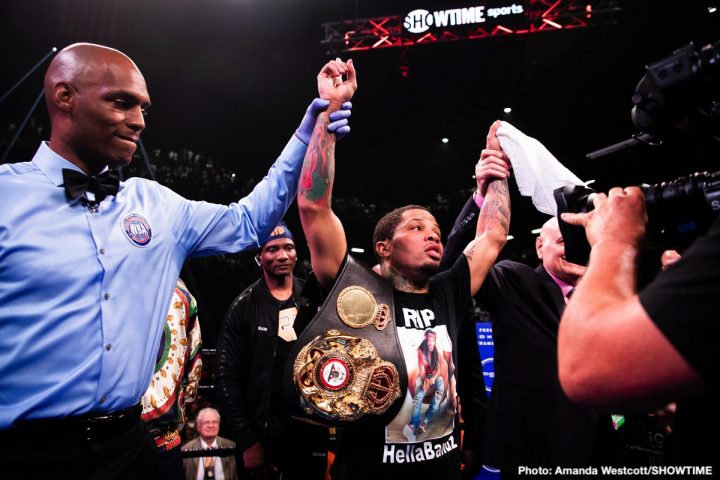 The 5’5 1/2″ Davis has the power to beat the 5’7″ Lomachenko, but maybe not the size. Lomachenko is the same size as welterweight champion Manny Pacquiao, but he chooses to fight at lightweight rather than at 147.

Now it’s up to Davis’ promoters at Mayweather Promotions if they’ll give him permission to fight the 31-year-old Lomachenko. The two-time Olympic gold medalist Lomachenko is in action at the end of this month against 2012 Olympic gold medalist Luke Campbell (20-2, 16 KOs) on August 31 for the vacant World Boxing Council lightweight title at the O2 Arena in London, England. Lomachenko is the favorite to win that fight.

“I didn’t think I was going to destroy him that fast,” said Gervonta to TMZ about his recent title defense against mandatory Ricardo Nunez. “I never come out looking for a knockout, but I capitalized on his mistake and took him out. He was a tough opponent. On to the next.

Yeah, he had a nice chin. I’m definitely looking for that maybe the beginning of 2020 or the middle or the end,” said Davis when asked if he’s ready to fight Lomachenko. “Yeah, I think I’m old enough to take on the challenges. I think I have enough skills. I’m maturing as a fighter, and as a person. I think it’s time,” said Davis.

Davis defeated World Boxing Association mandatory challenger Ricardo Nunez (21-3, 19 KOs) by a second round knockout last month on July 27.   The 24-year-old Gervonta and Nunez fought on Showtime at the Royal Farms Arena, in Baltimore, Maryland. Davis is getting into a habit of destroying his opponents quickly in an impressive fashion.

“I think that’s one of the biggest fights. Out of me and him [Lomachenko] or Deontay Wilder and Anthony Joshua, I think they’re the two biggest fights that everyone wants to see in the sport right now,” said Davis. “Just keep winning, and someday we’ll get in there,” said Gervonta when asked what message he wants to give to Lomachenko.

Gervonta is getting a little carried away right now in saying that a fight between him and Lomachenko would be one of the biggest fights in boxing. It’s still too early. Both fighters haven’t established themselves as huge draws yet, and it would be premature to compare a fight between them to a clash between Deontay Wilder and Anthony Joshua. Even the trilogy fight between Saul Canelo Alvarez and Gennady Golovkin would likely be bigger than Lomachenko vs. Davis.