Gennady Golovkin and Eddie Hearn to work together in partnership 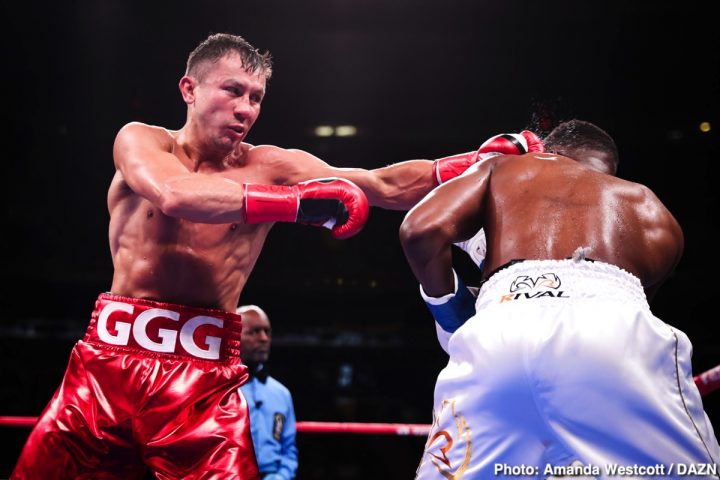 By Barry Holbrook: Former middleweight champion Gennady Golovkin (39-1-1, 35 KOs) will be working with Matchroom Boxing USA promoter Eddie Hearn in a partnership. There will be an announcement this week about it. The 37-year-old Golovkin will be fighting for the vacant IBF middleweight title in two months from now against Sergiy Derevyanchenko (13-1, 10 KOs) on October 5 on DAZN at Madison Square Garden in New York.

Golovkin wants a trilogy match with Saul Canelo Alvarez, but Hearn has no control over the Mexican superstar. Canelo’s makes his own decisions. Canelo is signed with Golden Boy Promotions, and he calls the shots of who he wants to face. DAZN would like to see Canelo face GGG in a trilogy fight, but there’s no indication that he’ll give them this fight.

It’s unclear how the partnership between Golovkin and Hearn will play out.  Is this a deal for Golovkin’s fighters on his GGG Promotions to be able to fight on Hearn’s Matchroom cards? That would be a good move for Golovkin.

Hearn has 4 options for GGG

Eddie has a number of fighters that he could potentially match up against GGG, like Demetrius Andrade, Daniel Jacobs, Billy Joe Saunders and Callum Smith. However, most of them aren’t popular in the United States, and they would bring bring in very few subscriptions to DAZN from the casual boxing fans. It takes years to build a big name in the U.S, and Saunders and Callum are unknowns with fans. Golovkin, who is nearing 40, doesn’t have enough time to wait for Callum and Saunders to become popular in America. He would have to fight them soon, and even then, he might lose to both. It’s hardly worth it for Golovkin to fight them unless he’s getting loads of money. . A rematch between Golovkin and Jacobs would be of interest for U.S boxing fans, as well as for DAZN.

Eddie Hearn and GGG will work together moving forward, sources tell The Athletic, and an announcement of their partnership will be made this week at the Golovkin-Sergiy Derevyanchenko presser in New York. The Oct. 5 middleweight title fight at MSG will be streamed by DAZN

What does GGG get in working with Hearn?

In working with Hearn, Golovkin could be looking to get the most out of what’s left of his boxing career. GGG’s not big enough to move up to heavyweight to fight Hearn’s #1 moneymaker Anthony Joshua. If Golovkin fought at cruiserweight, he could fight Joshua (22-1, 21 KOs). Hearn recently signed former undisputed cruiserweight champion Oleksandr Usyk to his Matchroom stable, and he’ll be fighting for the WBO heavyweight title in 2020 against the winner of the December 7 fight between Joshua and IBF/WBA/WBO champion Andy Ruiz Jr.

Hearn signed WBO super middleweight champion Saunders (28-0, 13 KOs) recently, and he mentioned GGG’s name as an option for him. Saunders even came to Golovkin’s home country of Kazakhstan not long ago to call him out. Still it’s not a fight that does anything for Golovkin in terms of increasing his popularity in the U.S, and it won’t bring in a lot of subscription from U.S boxing fans. The worst of of it is Golovkin might lose to Saunders, and that would be devastating for his career. Saunders is a defensive fighter, who likes to make his opponents look bad. Even if Golovkin beat him, it would be an ugly fight, and he wouldn’t come out of it looking good. The fight would help Saunders and Hearn, but not Golovkin.  GGG would be better to ignore Saunders, and focus on fighting guys that have exciting fighting styles.