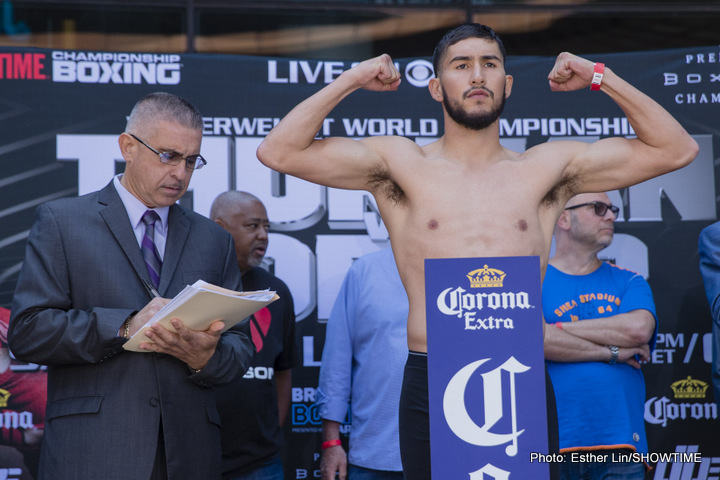 The Oscar De La Hoya Foundation is giving back to the community through a special night of professional boxing at Pasadena City Hall on Friday, August 30. The fights will be open to the public and feature some of Golden Boy’s best Southern California prospects. The celebration will also include a live concert and a beer garden. The event will be televised as part of a special Friday edition of the Golden Boy DAZN Thursday Night Fights series, which is available on regional sports networks around the nation.The fights will also be streamed live on RingTV.com and on Facebook Watch via the Golden Boy Fight Night Page beginning at 10:00 p.m. ET/7:00 p.m. PT.

Boxing aficionados and fans alike are encouraged to attend for a memorable night of high-level action and entertainment. All proceeds from the event will go towards the Foundation to help support programs that will benefit the youth and community of Pasadena.

“I am extremely passionate about giving back to the community, and I’m excited to bring this special event to my backyard of Pasadena,” said Oscar De La Hoya, Chairman and CEO of Golden Boy. “I know the importance of supporting and empowering our youth, which is why we are committed to hosting fundraisers and giveaways throughout the year to help encourage future generations to overcome any obstacles they face. All contributions made at the event will help the Foundation continue to drive programs that truly impact the community.”

“As a boxer, it’s very hard to appreciate a win without having experienced a loss,” said Ferdinand Kerobyan. “After my last fight I had to refocus, learn from my mistakes, and work hard to find new motivation to win again. A certain darkness is needed to see the stars again. I can say with confidence that I have learned a lot and I can’t wait to get back into the ring.”

Molina is a 29-year-old from Norwalk, Calif. who represented Mexico in the 2012 Summer Olympics in London. Molina has fought against very tough opponents, with his only losses being against Jarret ‘Swift’ Hurd and Levan Ghvamichava. After more than a year of inactivity, Molina will return to the ring to reinvigorate his career.

“I know that Ferdinand Kerobyan is coming off a loss, but I am not focusing on how he’s going to come,” said Oscar Molina. “I already know that he’s going to come at 100 percent. I am working on coming very prepared. I am confident in my style and my corner, so if I come well prepared, I’m going to walk away with my hand raised in victory.”

In the co-main event, Emilio “The Kid” Sanchez (18-1, 12 KOs) of North Hollywood, Calif. will face Jose Gonzalez (23-8-1, 13 KOs) of Guadalajara, Mexico in an eight-round featherweight battle. Sanchez is coming off two straight wins after losing his undefeated record via knockout.

Kerobyan vs. Molina is an eight-round welterweight fight presented by the Oscar De La Hoya Foundation. The fights will take place on Friday, Aug 30 and will be open to the public. The event will be streamed live on RingTV.com and on Facebook Watch via the Golden Boy Fight Night Page beginning at 10:00 p.m. ET/7:00 p.m. PT. The series will also be available on regional sports networks around the nation. To see when and where the series is available in your area, click here.

Standing-room only admission is free to the public. Limited seated tickets for this event will go on sale on Thursday, Aug. 15 at 10:00 a.m. PT and start at the fan-friendly price of $25. All proceeds from the event will go towards the Foundation to help support programs that will benefit the youth and community of Pasadena. Tickets are available for purchase now at
www.GoldenBoyTickets.com.