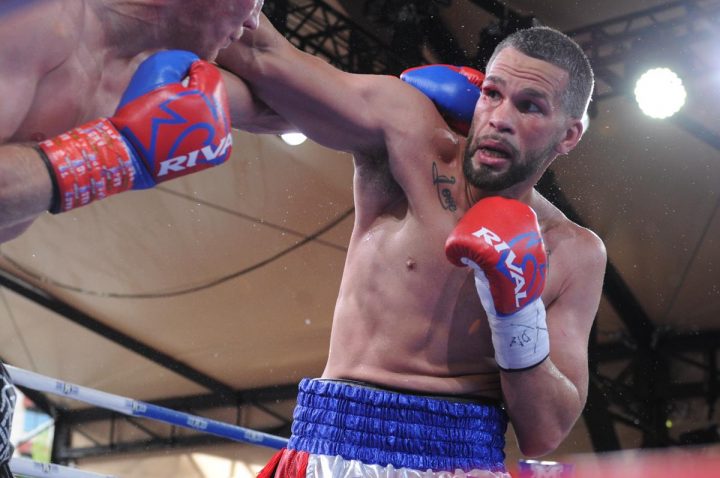 Foster, who is currently ranked #8 in the world by the WBA, outboxed the game Russian from the start, using his superior speed and ring generalship to win by scores of 100-90, 97-93 and 97-91.

To Grachev’s credit, he came forward the entire fight looking for an opportunity but he could never land more than one punch at a time and found himself walking into Foster’s combinations.

“I felt good about my performance tonight.”, said the world ranked contender who fights for Murphys Boxing.

“Grachev was durable and strong. He’s been in there with world champions and contenders and I was still able to sweep him with a unanimous decision. Definitely a good learning experience. I got cut in the second round and had to fight the rest of the night with it. I stayed calm under the pressure and I need to experience that type of adversity. Now it’s on to the next one. I want another fighter in the Top 10. I think I’m about two or three fights away from a world title shot.”

In regards to his next opponent, the soft spoken contender who prefers to do his talking in the ring, did mention one name he would love to share the ring with next.

“It’s up to my promoter, Murphys Boxing, my manager and my coach in regards to who I fight next but if I had my pick I would want to fight Jean Pascal. He looked great winning the WBA Interim Championship in a big upset and I’m ranked #8 in the world by the WBA and have the NABA title. I think it would make for a great fight between a former world champ and an undefeated contender. The winner would definitely be deserving of a world title shot.”

In additional action on the card…

In a shocking upset, former USA Olympian, Devin Vargas (21-5, 9 KOs) handed popular Irish heavyweight prospect, Niall Kennedy (13-1-1, 8 KOs) his first professional defeat by TKO in the 5th round of a scheduled 10 round bout.

Kennedy started strong, hurting Vargas in the third round but the crafty veteran began timing the undefeated prospect with surprisingly fast combinations. Continually beating Kennedy to the punch, the 37 year old showed flashes of the speed and ring generalship that once made him captain of the 2004 United States Olympic Boxing Team. After hurting and cornering Kennedy late in the 5th round, Vargas unleashed a barrage of punches that snapped the Irishman’s head back multiple times forcing the referee to stop the contest with only two seconds remaining in the round.

Kennedy, who has amassed an impressive following in the Massachusetts area and was on the verge of a world ranking, was naturally disappointed but still gracious and classy in defeat giving all credit to Vargas who in turn showed mutual respect to his opponent.

It was a show stealing, action packed heavyweight battle and it now leaves Vargas, a father of 5 who works full time at a Toledo, Ohio jeep manufacturing plant and also works as a high school football coach, suddenly back in the mix in the red hot division.

Springfield’s own Anthony Velazquez (7-0, 7 KOs) stopped Philadelphia’s Vincent Floyd (4-8-1, 2 KOs) 58 seconds into the 4th round of a 6 round welterweight bout. Floyd, who was giving the flashy young power puncher his toughest test to date, rightfully complained about a quick stoppage after a flurry from Velazquez brought the contest to a sudden end. The tough as nails Philly fighter, while down on the cards, didn’t even seem in trouble let alone hurt, but the crowd was in a frenzy and it may have influenced the hasty stoppage. Regardless with his combination of speed and power, Velazquez is without a doubt one of New England’s most promising young fighters.

Back from one of the shorter retirements in recent memory, world title challenger and New England fan favorite, Shelly Vincent (26-2, 1 KO) returned to the ring to win a unanimous decision over Karen Dulin (3-20-1, 1 KO) in a 6 round featherweight bout. ‘Shelito’s Way’ dedicated the fight to her first trainer who recently passed away and hinted at retirement again but said the right fight could bring her back to the ring.

Elvis Figueroa (7-0, 4 KOs) who trains alongside Charles Foster in New Haven made incredibly short work of Argentina’s Marcelo Molina (23-16-1, 19 KOs) overwhelming and stopping him in the 1st round of a 6 round super middleweight bout.

Albany, New York’s Ray Jay Bermudez (8-0, 5 KOs) won a unanimous, but very close, decision against Quincy, Florida’s Leonardo Kenon (3-7, 1 KO) in a back and forth 4 round junior welterweight bout.

In the opener, Springfield’s Rollin Whitley (1-0) made his long awaited professional debut winning a unanimous decision over Florida first timer, Ayron Palmer (0-1). Whitley pumped up the partisan crowd by coming out to the ring to the theme song from the classic tv western, Rawhide before dropping Palmer in the 1st round on way to a 4 round unanimous decision in a competitive fight in the junior welterweight division. 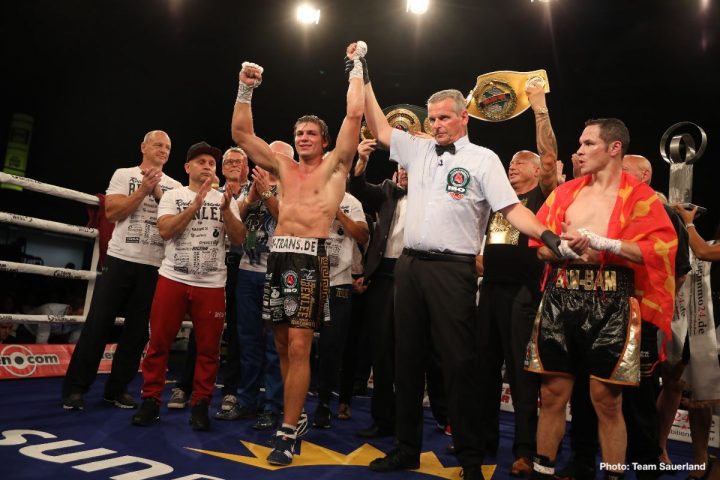 Vincent Feigenbutz (31-2, 28 KOs) claimed the IBO International Super Middleweight title with an emphatic eight round TKO victory over the brave Cesar Nunez (16-1-1, 8 KOs) at the Friedrich-Ebert-Halle in Ludwigshafen, Germany.

The previously unbeaten Cesar Nunez climbed off the canvas twice in the eighth round before the referee waved off proceedings following yet another onslaught from Vincent Feigenbutz. Having captured the IBO International belt, Feigenbutz moves closer towards a world title shot against Eubank Jr.

“I implemented my tactics well, kept him at distance, varied my punches and found space,” said Feigenbutz. “I want to go to the top and take anyone who comes in my way. I’m not backing down from anyone.”

Vincent’s desire for a world title shot was echoed by his promoter Nisse Sauerland. “Vincent boxed really well, it was another entertaining and exciting performance. He took care of his job and he’s ready for big, big fights.”