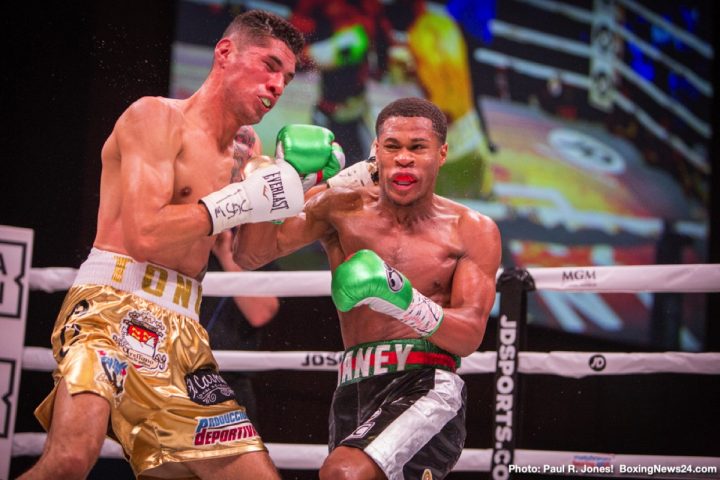 By Kenneth Friedman: Devin Haney (22-0, 14 KOs) will face #3 WBC Zaur Abdullaev (11-0, 7 KOs) in a World Boxing Council lightweight title eliminator next month on September 13 at Madison Square Garden in New York. This will be a Matchroom Boxing promoted card.

The winner of the Haney vs. Abdullaev fight will be the mandatory challenger for the eventual winner of the vacant WBA 135 pound title between Vasiliy Lomachenko and Luke Campbell. Those two will be squaring off at the end of the month on August 31 at the O2 Arena in London, England.

Undercard fights for the Haney vs. Abdullaev card on September 13:

Arum says Haney may not get fight with Lomachenko

“That may very well be. He signed with the wrong company,” said Arum in commenting about Haney signing with Matchroom USA rather than Top Rank.

Haney is in a tough spot in fighting Abdullaev in a WBC title eliminator, because a victory for the 20-year-old Devin doesn’t necessarily mean he’s going to get a title shot against Lomachenko (13-1, 10 KOs), if he wins the vacant WBC belt this month against Campbell. Lomachenko’s promoter Bob Arum of Top Rank Boxing already has plans of having him fight the winner of the Richard Commey vs. Teofimo Lopez fight for the IBF title.

If Lomachenko wins that fight, which he’s expected to, then he could be elevated to World Boxing Council Franchise Champion. That would leave the winner of the Haney vs. Abdullaev to fight to be either appointed the new WBC champion or they would have to fight the next highest ranked contender in the WBC’s rankings.  That could be Javier Fortuna. There’s not as much for Haney to gain in fighting Fortuna compared to Lomachenko.

Haney has youth on his side

What Haney has going for him is his youth. He’s only 20-years-old, and he’s got a lot of time to slowly build himself to become a major star with the help of Matchroom. So even if Lomachenko never fights Haney, he still can become a superstar, as long as he continues to win, and captures world titles. Lomachenko isn’t expected to be around too much longer. He’s 31, and he took a lot of punishment in his fights against Jose Pedraza and Jorge Linares. Although Lomachenko’s boxing fans look at his recent win over Anthony Crolla as evidence that he’s still fighting at a super high level, but that was always going to be a mismatch. Crolla was arguably a paper champion when he held the WBA lightweight title from 2015 to 2016.

Abdullaev, 25, is unbeaten still, but his wins have come against old timers like Henry Lundy and Huberto Martinez. He hasn’t beaten any of the talented lightweights.