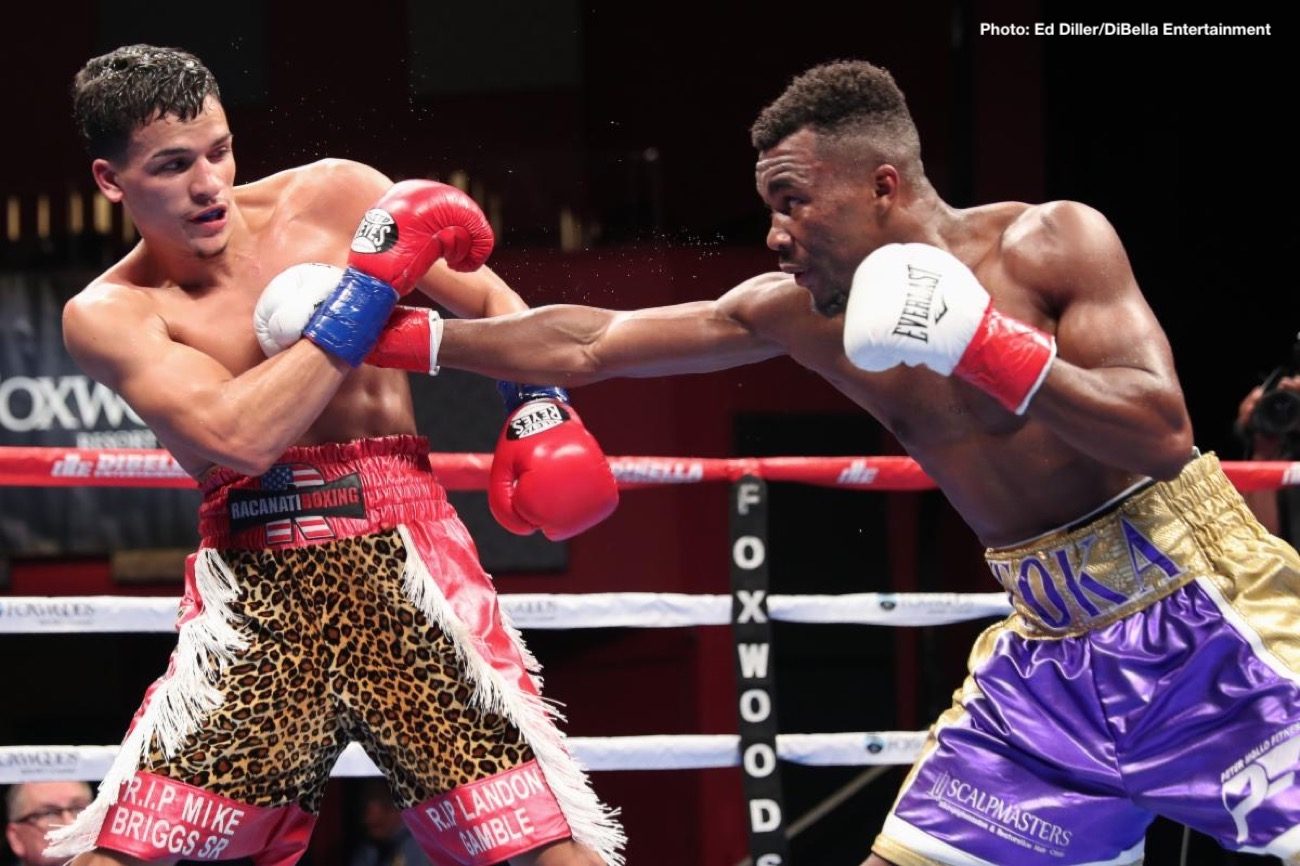 In the main event, Toka Kahn Clary, 128 lbs., born in Monrovia, Liberia, and now living in Providence, RI, battled Irvin Gonzalez, 127 lbs., of Worcester, MA, in a thrilling 10-round contest with the vacant WBA NABA US super featherweight title at stake. The fierce battle featured exciting exchanges, shifts in momentum and, ultimately, a clear winner. Trained by Freddie Roach, southpaw Kahn Clary began pumping his jab, looking to plant his straight left on the body and head. Early on, Gonzalez threw flurries of punches, but Kahn Clary’s straights were finding their target and bloodied his nose in the second stanza. To his credit, Gonzalez was not discouraged by Kahn Clary’s success and fired back with fervor whenever he could. The bout turned into a slugfest in the fifth with Kahn Clary and Gonzalez trading blistering shots.

Kahn Clary’s straight left counter was his best weapon, but Gonzalez always had a response, often in combination. By round seven, the two adversaries were standing shoulder-to-shoulder with Kahn Clary digging to the body and Gonzalez throwing his straight right. A short right hook briefly shook Gonzalez in the eighth and his nose was bleeding profusely by the ninth, but he continued his offensive attempts, despite being outworked. In the final frame, Kahn Clary had Gonzalez trapped in a neutral corner and threw everything he could to score a knockout. Gonzalez looked exhausted but refused to give up, doing his best to retaliate with heavy shots until the bell sounded. The judges tallied 99-91 twice, and 98-92, all for Kahn Clary via unanimous decision to improve his record to 27-2 (18 KOs). Kahn Clary indicated after his victory that he will likely now compete in the super featherweight division. Though Gonzalez, 12-2 (9 KOs), lost for the second time in a row, his brave effort helped to redeem him following a disastrous outing in May that resulted in a TKO defeat.

World champion Alicia “The Empress” Napoleon-Espinosa, 161 lbs., of Lindenhurst, NY, defended her WBA super middleweight title for the second time in impressive fashion, stopping Schemelle Baldwin, 163 lbs., of Newark, DE, inside four rounds in the co-main event. Napoleon boxed on her toes at the outset, jabbing and throwing in combination when in front of Baldwin. By the end of round one, Napoleon was targeting the midsection. Baldwin attempted to land countershots when she felt there was an opening. The champion’s intelligent use of angles allowed her to land precise uppercuts and thudding body shots. Napoleon began to apply pressure, forcing Baldwin to be stationary and not move as much as she had earlier. Near the end of round three, the tough Baldwin absorbed an extended barrage of punches against the ropes without throwing much in return. In the fourth, Napoleon continued her attack, pinning Baldwin back up against the ropes and unloading her arsenal. By the midway point of the round, the referee felt that Baldwin had taken too many heavy blows and halted the action at the 1:30 mark. Napoleon, now 12-1 (7 KOs), captured her world title in March 2018, via 10-round unanimous decision against the previously unbeaten Femke Hermans. She then made her first defense last August, earning another 10-round unanimous points win against Hannah Rankin. Baldwin, a four-time Golden Gloves champion, is now 3-1-1 (2 KOs) as a pro.

Going the eight-round distance for the first time in his career, southpaw Hurshidbek “Hershey” Normatov, 152 lbs., of Andijan, Uzbekistan, now based in Brooklyn, NY, captured the WBA NABA US super welterweight title via unanimous decision versus Walter Wright, 154 lbs., of Seattle, WA. Normatov fired stiff jabs whenever Wright stepped inside and began to throw punches in bunches as the rounds wore on. Wright’s primary plan of attack was to attempt counters with looping shots around Normatov’s tight guard. However, Normatov’s straighter punches and higher work rate did more damage. The scores were 80-72 twice, and 79-73, all for Normatov, now 9-0 (3 KOs). Wright returns to the Emerald City with a 17-7 (8 KOs) record. As an amateur, Normatov accumulated a 190-40 record and won the European Amateur National Championships in 2014.

Former world champion Kali Reis, 142 lbs., of Providence, RI, punished an outgunned but game Patricia Juarez, 142 lbs., of Denver, CO, for six entertaining rounds to earn a unanimous decision win with three tallies of 60-54. Reis would throw in combination whenever Juarez tried to close the gap. If Juarez did manage to get inside and clinch, Reis used her free hand to land dizzying uppercuts up the middle. Now 16-7-1 (5 KOs), Reis won the WBC women’s middleweight world title in 2016 and has gone the distance with several prominent female fighters, including Christina Hammer twice, Hanna Gabriels, and Cecilia Braekhus. Juarez suffered her second defeat, leaving the ring at 4-2. The Reis-Juarez contest was promoted in association with Star Boxing.

Heavyweight prospect Stephan “Big Shot” Shaw, 251 lbs., of Saint Louis, MO, patiently stalked southpaw Willie Jake Jr., 233 lbs., of Indianapolis, IN, and looked to capitalize any time his adversary made a mistake. While Jake did land some leather, nothing he threw seemed to bother his taller rival. Shaw decked Jake in each of the first three rounds then forced a stoppage in the fourth frame. In round two, Shaw hurt Jake with a right to the body then pounded away until the Indianapolis resident had fallen through the ropes for a knockdown call. In the third, Shaw had Jake trapped near the red corner and a combination felled him again. A chopping right to the top of the head stunned Jake in the fourth and a series of left hooks badly hurt him, persuading the referee to intervene for the TKO at the 0:56 mark. Shaw upped his resume to 12-0 (9 KOs), while Jake, now 8-3-1 (2 KOs), suffered his second consecutive defeat this year.

Jacob Marrero, 127, of Bridgeport, CT, made quick work of the debuting Juan Ibarra, 127, from Willow Springs, NC, needing just 126 seconds to secure a TKO victory. Shortly after the opening bell, a straight left from Marrero hurt Ibarra then another one dropped him. Though Ibarra arose, Marrero went for the finish and landed two powerful right hooks to deck his foe once more prompting the referee to end the contest. The win improved Marrero’s record to 4-0 (3 KOs). Compiling an amateur record of 58-9, Marrero was a 2016 New England Golden Gloves Champion, a five-time Connecticut Silver Gloves Champion and a five-time Connecticut Junior Olympics Champion.

Helen Joseph, 118 lbs., born in Nigeria but now based out of New Haven, CT, dominated Martina Horgasz, 118 lbs., of Budapest, Hungary, en route to a six-round shutout victory with three identical scorecards of 60-53. The win upped Joseph’s record to 17-3-2 (10 KOs), while Horgasz fell to 5-4 (4 KOs). Joseph, a two-time former world title challenger, briefly held the IBF Inter-Continental featherweight belt in 2013 and has not lost since 2015.

Nelson Perez, 135 lbs., of Marlboro, MA, improved to 2-0 (2 KOs) with a second-round TKO versus Devon Grant, 140 lbs., of The Bronx, NY, now 0-2. The stoppage came at the 2:04 mark of the frame. As an amateur, Nelson won the 2018 New England Golden Gloves Championship and won first place at the Rocky Marciano Championship and Connecticut Championship tournaments that year as well.

Using her excellent boxing skills, Yuh fended off the challenge of game challenger Loetizia Campana, from France but fighting out of Thailand, scoring a clear unanimous decision after ten fast-paced and entertaining rounds.

NEWS:   Statements from A. Serrano and manager regarding a demand from Eddie Hearn

Campana, who had won three straight in Bangkok coming into this bout, tried to unsettle the more experienced champion, but Yuh had an answer for everything and appeared to be in control of the fight from start to finish.

39-year-old Hee-Jung Yuh, who held IFBA and WIBF world titles at Super Flyweight and Bantamweight between 2012 and 2014, takes her impressive professional record to 22-3 (11). Loetizia Campana drops to 8-6 (3).