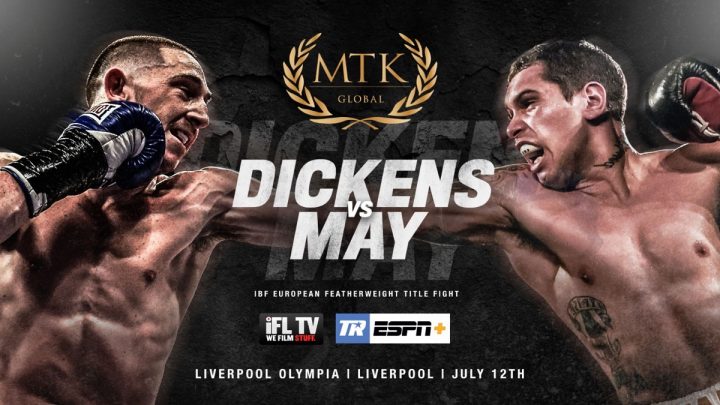 Hometown hero Jazza Dickens is honoured to be representing his city of Liverpool on tonight’s huge #MTKFightNight card when he takes on Nathaniel May for the IBF European featherweight title.

Dickens (26-3, 11 KOs) faces May (21-1, 12 KOs) at the Eventim Olympia live on ESPN+ in association with Top Rank and also live on iFL TV, and he plans on doing his loyal supporters proud with a big performance.

Dickens said: “There is no greater motivation to me than fighting in Liverpool. There’s so many good memories I have and so much love I have for the people of Liverpool.

“Everyone who is coming to the fight and has paid their hard earned money. I know it’s expensive to come, so for the support all I can say is thank you for believing me.

“When I go in that ring, I’m not going in with the mind of a 28-year-old man in the prime of my life, I go in with the mindset of a 12-year-old boy with a hunger of being world champion. I have to make that kid proud.

“I have to thank MTK Global for the opportunity too. If you’ve never seen me before, I’m always in exciting fights. You’ll see a world class Jazza tonight. I’m happy to put that out there because that’s how I feel. It’s not me having a big ego, it’s just how I truly feel.”

May taunts Jazza ahead of battle

Nathaniel May insists that all of the pressure is on Jazza Dickens ahead of their IBF European featherweight title fight on Friday’s massive #MTKFightNight event at the Liverpool Olympia.

Australian star May (21-1, 12 KOs) takes on Dickens (26-3, 11 KOs) live on ESPN+ in association with Top Rank and also live on iFL TV, and with the fight being in the hometown of Dickens, May thinks that plays a big factor in the fight.

May said: “The pressure is on him. If he wins he’s a hero but if he loses it’s something different that he doesn’t want. You can always expect me to show up in a good fight so it’s up to Jazza to show up and bring it.

“I’m looking forward to getting the job done. I’ve watched him a few times and always said I’d love to fight him in the future, and here it is. This is a fight that will get me on the big stage and get my name in the spot for a title shot.

“My last camp went great. I was sparring better than ever and the whole camp went really well, so I’m ready. It’s great to be headlining too, this is a big bill with big names on it and it’s great to be a part of it.”

Flanagan to unleash fury in Liverpool

Terry Flanagan has promised fans an explosive performances that sees him return to his best when he fights on Friday’s huge #MTKFightNight event at the Liverpool Olympia.

Flanagan said: “It’s always good to fight in Liverpool and I’ve had some good nights there. I won Prizefighter in the Olympia, so hopefully it will be another explosive performance and I’ll be back at my best.

“I’ve watched a bit of my opponent and he looks like a tough operator. He’ll come for a fight and it seems he likes to take a few to give his own so it should be a great bout.

“I’m not overlooking this fight and I always put pressure on myself. Anything can happen as it’s boxing. so I’ve got to be in there switched on and do a job.

“It’s going to be good to show people what I’m about. My weight is good and we’re on track for where we need to be. We’ll get this one won and then I’ll be right back in the gym looking to get out again as soon as possible.

“When I get these few fights under my belt that’s when you’ll see the best of me. I showed that in the Diego Magdaleno fight. I was straight into that after the Jose Zepeda fight and that was one of my best performances, so if I’m active I’ll get better and better.”

A huge bill on Friday also features a key showdown between Jazza Dickens and Nathaniel May for the IBF European featherweight title, four-time world title challenger Martin Murray back in action against Rui Manuel Pavanito, plus the likes of Natasha Jonas, Sam Maxwell, Ged Carroll, John Quigley, and Craig Glover make up a massive undercard.

Extra tickets have been made available for Friday’s massive #MTKFightNight event at the Liverpool Olympia – live on ESPN+ in association with Top Rank and also live on iFL TV.

A stacked bill features local hero Jazza Dickens (26-3, 11 KOs) going up against Nathaniel May (21-1, 12 KOs) in a crunch battle for the IBF European featherweight title.

There is also a battle between Ged Carroll (10-0) and Jordan Ellison, plus John Quigley (15-2, 3 KOs) fights Alexander Zeledon.

Tony Bellew’s hard-hitting cruiserweight protege Craig Glover (9-2, 8 KOs) rounds up the card, as he goes up against Jiri Svacina.