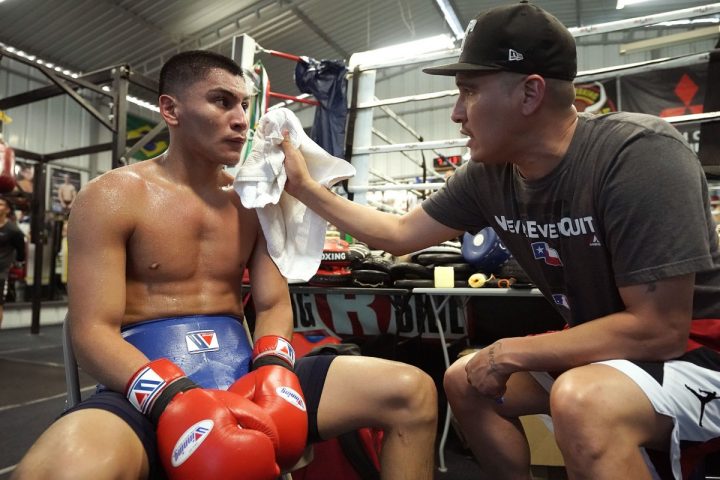 Vergil Ortiz Jr. (13-0, 13 KOs), Hector “El Finito” Tanajara Jr. (17-0, 5 KOs) and Joshua “The Professor” Franco (15-1-1, 7 KOs) discussed training camp under renowned trainer Robert Garcia ahead of their respective fights. All three fighters will return on the Ortiz vs. Orozco card, which takes place Saturday, Aug. 10 at The Theatre at Grand Prairie in Texas and will be streamed live on DAZN.

Ortiz will headline in his hometown for the first time against Antonio “Relentless” Orozco (28-1, 17 KOs) of San Diego, Calif., while Franco will defend his NABF and WBA International Bantamweight Titles in a trilogy fight against Oscar “El Jaguar” Negrete (18-2-1, 7 KOs) of Tierralta, Colombia. Tanajara will put his WBC USNBC Lightweight Title on the line against Ezequiel Aviles (16-3-3, 6 KOs) of Ensenada, Mexico.

Below is what all three fighters had to say during a recent camp visit, along with some insight from renowned trainer Robert Garcia.

“I’m fighting for my hometown. I’m fighting for all the little kids that think they can’t make it because it’s a small town. Not many people make it out of Grand Prairie. I hope to set a good example for them. I felt all the love when I visited. I felt the atmosphere, and it was electric. We got a lot of people to show up to the press conference, so I know there’s going to be a lot of people who show to the fight.”

“I’m really excited to be fighting in the main event. I’ve only done that once before. For me being the main event is a test for me to show how many people want to see me and how excited they’re going to be to watch me fight. But I have a lot of people telling me they want to go and that they already bought tickets and even want some shirts.”

“Fighting alongside my childhood friends is really cool. I never thought that we would be on the same card fighting together. We’re all fighting for a title that night. I’m fighting for the WBA Gold [Welterweight Title], and Joshua [Franco] will defend his belts in the trilogy fight against Negrete. Tanajara is fighting for the belt he won in Tijuana. It’s great to see how far we’ve come.”

Ortiz Jr: This fight will help me get to the top faster

“Antonio Orozco believes that this fight will put him back on the map. He feels a win will make people believe in him again. Honestly, he only lost one time; I don’t see why they wouldn’t believe in him. This fight will definitely make his meter go up. People will start looking at him if he gets the win. That’s going to make him very dangerous. He’s hungry. But I’m coming up too. I want to be a world champion too. I have my dreams that I want to achieve. This fight is going to help me get there a lot faster than these other fights, so I’m very glad he took this fight. It’s a very good opportunity for both of us.”

“This is Orozco’s first fight in the welterweight division. He was having a hard time making weight at 140. We’re going to see how his power holds up and see what he can take because seven pounds is a big jump. Orozco’s body is going to be bigger. It’s a whole new story, and we’re going to find out on August 10.”

“For this third fight, you can expect the same fighter I always am. I’ll be smart, explosive, and I’ll be throwing a lot of combinations. I feel like I’m going to be stronger than the last two fights. The only thing that’s different is that it’s going to be in Texas. That’s going to give me more motivation. I’m always training hard like always. After this I want to go on to bigger things. I want to fight for a world title.”

“It’s very special sharing this night with guys I grew up with. I know these guys since the amateurs. I saw when Joshua first walked into the gym, and I knew Vergil since we were young. I also knew the Rincon brothers [Alex and George]. We all came up together, so it feels good to be together on the same card to give fans an exciting night of boxing.”

“It doesn’t add pressure to see my stablemates getting knockouts. I’m already 17 fights deep. I just have to stick to my game plan and what my coaches tell me. That’s what works. My last fight was in Tijuana, and it was very special fighting in Mexico. I’ve always wanted to fight there, and I like the crowd. Mexican fans are always the best. They just want to see people go at it. I’m glad I was able to get a belt that night too, so it was very special for me.”

Tanajara Jr. not bothered by his lack of knockouts

“It doesn’t bother me that I haven’t had a knockout since 2018. I know I have power. But trying to make 130 pounds was draining me a little bit. At 135 pounds, I feel much stronger. Even though I’ve been fighting better opposition, I’ve still been hurting them in there, and I feel that a lot of my knockouts are yet to come.”

“For this camp we’ve been working on all my little mistakes. I’m being busier with my jab. I’m working on putting smart pressure. I’m working on doing all the things needed to get the victory and to get try to get the guy out of there. On August 10, my fans can expect an exciting fight. I’m motivated more than ever because it’s in Texas, my hometown, and a lot of family and friends who usually can’t go are going to be there. I’m very excited, and I hope to put on a great show.”

ROBERT GARCIA, 2012 Trainer of the Year:

“It’s going to be a great event. It’s going to be awesome that we’re going to Vergil Ortiz’s hometown in Grand Prairie. I’m sure he’s very excited, along with his fans, his family, and his friends. We also have two kids from San Antonio that are going to bring a lot of friends and family.”

“We are going to be very busy, but I have a lot of help. With Vergil, his father Vergil Sr. and co-trainer Hector Beltran are always on top of Vergil and make sure he works hard. With Hector Tanajara, we have my son, Robert Garcia Jr. and Jose “Chepe” Contreras. With, Joshua Franco we have same thing. For both guys, their fathers are very involved. Hector Tanajara Sr. and Jessie Rodriguez [father of Franco] are involved and work the corner for their sons, so it won’t be as hard as it sounds that night.”

“This has been our fourth training camp with Vergil. It’s unbelievable to see him develop so fast. You hardly see that. You only see that with an Olympic Gold medalist like Oscar De La Hoya, who won his first world title in his 12th fight, or with Olympians like Fernando Vargas, who was 14-0 when he became a world champion. Vergil is one of those kids. He didn’t go to the Olympics, so he didn’t get the same recognition as the Olympians did, but he’s close to becoming a world champion.”

“Here in my gym, whoever you spar and whatever weight division you’re at, it’s going to be tough. You’re going to have to work hard to be able to compete. I have nothing but world class fighters. For example, Vergil is sparring fighters that are 160, 168. I don’t want to say dominating them because they’re also my fighters, but he’s able to compete with them and give them all they can handle, so that tells you what he is. He spars with Jose Ramirez, a world champion right now. He spars with Mikey Garcia, who is pound for pound one of the best fighters in the world, and he’s able to compete well against them.”

Ortiz vs. Orozco is a 12-round fight for the WBA Gold Welterweight Title presented by Golden Boy. The event is sponsored by Tecate, “THE OFFICIAL BEER OF BOXING,” and Hennessy “Never Stop. Never Settle.” The event will take place on Saturday, Aug. 10 at The Theatre at Grand Prairie in Texas and will be streamed live on DAZN.