Teofimo Lopez: The Gift and the Curse 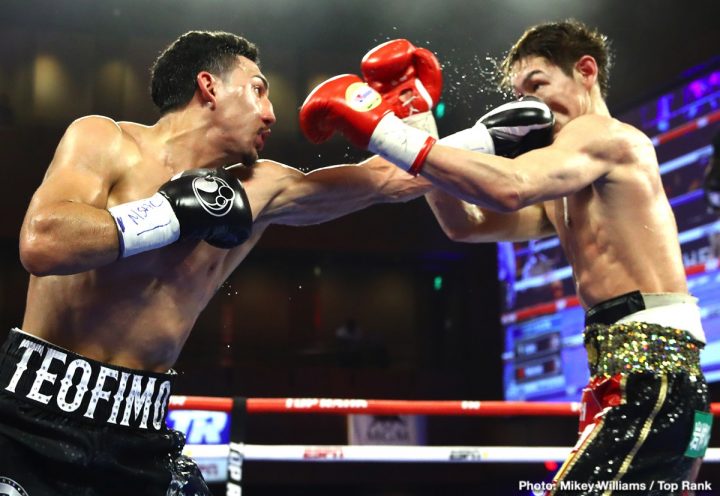 By Joseph Hirsch: It’s a story one often hears from star trainers about their prized pupils, words to the effect of He wasn’t the most talented kid in the gym, but he opened and closed the place. He took instruction well, and after a while, some of those kids who were more talented than him started chasing girls or drinking (or getting into even bigger trouble). Meanwhile, he kept coming back, until one day he was, just by dint of hard work, the best fighter in my stable.

This is a phenomenon that’s popped up in the origin stories of boxers as disparate as Thomas “Hitman” Hearns, and Sergey “Krusher” Kovalev. These fighters who aren’t always gifted with the fastest reflexes are many times given another gift that actually pays dividends much longer and more continuously than pure skills: they have to work harder, and as a consequence develop deeper toolboxes and more tricks.

The point I’m making here isn’t new, but we need occasional reminders. Here’s yours for today: Bernard Hopkins was no match for Roy Jones in his prime (no one was), as “RJ” could rely on insane athletic gifts, the head movement, the punches from seemingly nowhere, to flummox the most seasoned boxers. Once the reflexes went, though, Roy had an empty trick-bag (see his fight with Calzaghe). B-Hop meanwhile accumulated grey hairs and Wins with near-equal frequency when anyone dependent wholly on reflex would have been easy pickings for younger fighters.

This is not to say that hard work always beats out talent, or that the two don’t sometimes come packaged together. Floyd “Money” Mayweather was not only the best boxer of his generation, but was also the hardest working man in the gym. He still probably is the hardest worker there (without naming names, look how some of his contemporaries have rounded out in the face or gone soft in the middle as compared to Floyd, who still looks like he could go twelve with a man half his age).

But Mayweather is exceptional even among the exceptions. For the most part, giving a lot of talent to a very young and impetuous guy is like giving a sixteen year-old a supercharged Porsche Boxster on their 16th birthday. You hope they don’t wrap the thing around a tree on prom night, but at the same time you can’t live their life for them and sometimes what you dread most happens, no matter how many lectures you give.

Another gift-slash-curse is the massive, one-punch KO power. Knockouts make great highlight reels, help boxers with their marketing, and also boost confidence. But knocking over men like ninepins also robs fighters of the chance to hone other skills, to test their conditioning, to deal with adversity. You just have to hope that when that first test comes, when that unheralded journeyman or contender with hunger in his eyes stands across from the young hyped fighter, he challenges the kid, takes his best shots, but also forces the young prospect to mature and learn rather than wilting the first time things finally don’t go his way.

Teofimo Lopez is probably a top five lightweight boxer right now. He’s also about a decade younger than most of his other cohorts in the crowded field (I’m not breaking out the calculator, but the mean age between Vasyl Lomachenko, Jose Pedraza, Luke Campbell, and Richard Commey is about thirty).

Vasyl “the Matrix” Lomachenko is the only one with less professional experience than Teofimo, and even that’s debatable (there’s still argument among fans as to whether or not the World Series of Boxing should count as pro). It’s also irrelevant, as Loma is one of the most storied amateurs since László Papp.

Teofimo Lopez, in addition to being younger and less seasoned than the other elite lightweights, is doubly gifted-cursed, first with preternatural reflexes and second with one-punch knockout power.

Prior to his fight on July 19th, he was in desperate need of someone with skill and will to test him and take him the full twelve, to sober him up a bit behind the wheel of that Porsche so to speak, in a way similar to how James Tillis helped improve Mike Tyson by forcing him to fight patiently and accept, alas, You can’t knock ‘em all out, and moreover, You can’t always win pretty.

Slacking in the gym and overlooking one’s opponent aren’t advisable, either. You can go quickly from looking down on a man to staring up at him while his arms are raised and he’s hovering over you splayed out there on the canvas.

Thankfully Teofimo got his Tillis, his reality check in the form of Masayoshi Nakatani, in his last outing.

There will be fair-weather fans and fickle naysayers who will treat the learning experience Teofimo got as him being “exposed” or taking a humble, but Lopez should do the smart thing and tune this out as white noise (assuming he even bothers with boxing twitter feeds or facebook group chatter).

But what will he learn from it, and where will he go from here?

He and Vasyl Lomachenko have been on a star-crossed course thus far, content to trade verbal jabs rather than literal ones. What’s more is IBF titleholder Richard Commey is almost undoubtedly Teofimo’s next dance partner. While Commey is less naturally skilled than Lopez and sports a couple blemishes on his pro record, he also possesses a wicked right hand, which is a punch that landed with some regularity for Nakatani in his distance fight with Lopez.

One thing Commey is lacking is the laundry list of excuses that Teofimo Lopez rattled off in several post-fight interviews since his match with the tough and game Japanese warrior.

It’s understandable when a fighter doesn’t want to divulge much of his strategy before an upcoming campaign, or to give up the game, but if, as Teofimo Lopez asserted, his plan is to avoid guys who are six feet tall and to make sure there’s harmony between his new spouse and the in-laws, then he might want to reconsider his father’s lofty aspiration for him to be the greatest boxer of all-time.

“Outside shit affects you,” as Timothy Bradley once put it, but one must also compartmentalize, and while we’re at it, contextualize. For some context is in order, since we’re talking about “all-time” greats (or at least Lopez’s father is).

“Gypsy” Joe Harris fought while blind in one eye, as did Harry “the Pittsburgh Windmill” Greb (who also managed the astonishing feat of rattling off 45 wins in a single year); Joe Gans, the Old Master, considered to be one of the greatest boxers of all-time, fought while his insides were literally corroding due to the effects of the “white death,” as tuberculosis was then called.

Understand, unlike General Mark Antony in Shakespeare’s Caesar, I come not to bury Teofimo but to praise him, but I’m praising him with the caveats that he needs to learn something from his last fight, and to leave the Diva complex about needing to be one-hundred percent to pop stars shouting at their assistants that they won’t go onstage unless all of the red M & M’s are removed from the glass bowl in the green room.

Vasyl Lomachenko gutted it out in a fight where he tore his labrum (I’ve suffered a labral tear and it’s no joke) and his country is being convulsed, wracked and riven by a serious war in the Donbas region. And I can’t speculate on what’s happening in Loma’s personal life, since the man doesn’t air his laundry in public.

I think Teofimo can get himself ready, and what’s more, he has a very good chance to win the fight with Lomachenko if he does.

In a recent rap session between ESPN’s Max Kellerman and former pound-for-pound king Andre Ward, Max pointed out that there was the sense that Lomachenko was a bit “brittle,” that even though he hadn’t had a ton of pro fights, the amount of time he’d spent in the amateurs had taken something from Loma. He’s been cut, put on the canvas, and had surgery.

There’s definitely some truth to this, and as much as Loma has accomplished as an amateur and a pro, setting all-time records with the speed at which he’s acquired titles as well as wowing with his inventive footwork and combinations (his backflips are also arguably better than Teofimo’s), it’s also true that Loma may have not only peaked as a pro but more than likely reached his ceiling weight-wise. He’s filled out at lightweight and gained muscle, but he’s lost a bit of his great flexibility. Teofimo is still growing into his man-strength and also entering his prime.

Some would point to Orlando “Siri” Salido’s roughhouse and ugly win over Lomachenko as a blueprint for Teofimo to follow, but the problem is that Loma learned quite a bit in that loss about the difference between amateur fighting and the paid ranks, and also that nothing short of sheer corruption keeps Laurence Cole employed as a referee. Almost anyone else would have first warned Salido, deducted points, and then finally disqualified Siri for what Roy Jones called “horribly low blows.” That said, Salido’s strategic dirtiness did the trick for him, and more seasoning in the pros would have taught Lomachenko to repay dirt in kind rather than looking to the ref for assistance. Especially when that ref is Laurence Cole. One should always “work the ref’s blind side,” as Fritzie Zivic had it, and Laurence Cole has two blind sides. And when he’s not doing his best Stevie Wonder impression, Laurence Cole gives Jay “Nadir” Nady a run for his money in terms of spoiling the action and butting in where it’s not needed (my proctologist is less invasive than Nady).

So studying tape on Salido is probably not going to get Teofimo ready for Loma.

And while it would be unfair to compare Loma and Teofimo in terms of literal maturity, since one man’s ten years older than the other, it should also be remembered that boxing is as much mental as physical and that Loma’s trick bag is much deeper than Lopez’s, deep enough that age difference and wear-and-tear might not be enough for the young lion to best the older one.

I’ll put it simply: Loma was ready for Teofimo yesterday. Teofimo is not ready for Loma yet, but can get there. How he performs against Richard Commey will tell us a lot (but not everything) about how he may do against Lomachenko.

Some boxers have used professional hypnotists to gain a mental edge (or at least to try to get one); others have retreated to monasteries or spoken with spiritual advisors. It’s not my place as a boxing writer to either deride or endorse any spiritual path, or recommend or caution against seeing a sports psychologist (as Carl Froch was forced to do, after being goaded to near-madness by George Groves). I’ll close this piece merely by saying that if Teofimo doesn’t get himself to 100 percent soon, he’d better find a way to psych himself into thinking he’s there. And hopefully his volatile father doesn’t put too much pressure on his son, and the man may even want to consider handing over some training duties to someone else, as some of his recent tirades make Angel Garcia look like a voice of reason.

Joseph Hirsch, author of My Tired Shadow and other novels

Boxing » News » Teofimo Lopez: The Gift and the Curse