Spence: Porter will raise the white towel of surrender 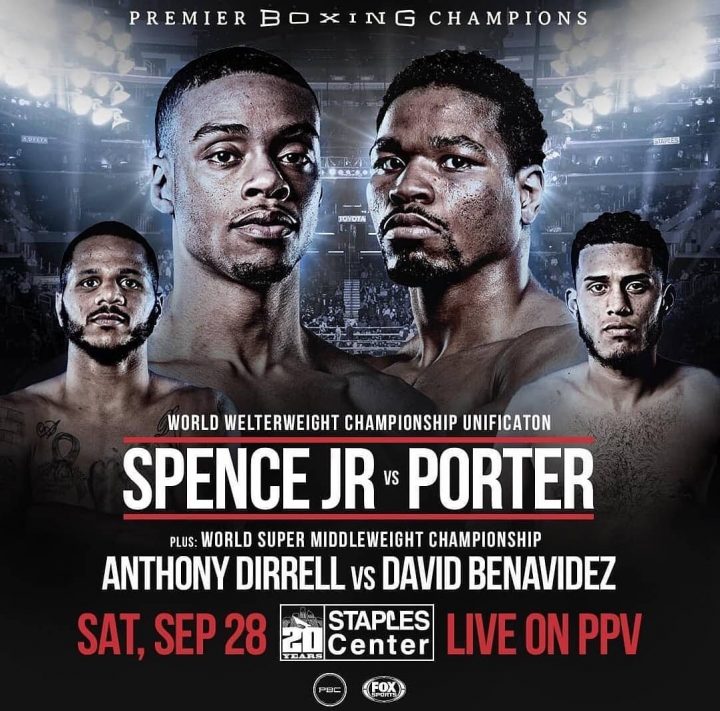 By Sean Jones: IBF welterweight champion Errol Spence Jr. says the only things that can save WBC champ Shawn Porter is the white towel of surrender or the referee when the two meet up in a unification fight on September 28 on Premier Boxing Champions on Fox Sports Pay-Per-View at the Staples Center in Los Angeles, California.

The main event between Spence (25-0, 21 KOs) and Porter (30-2-1, 17 KOs) is a great fight on it’s own, but the co-feature bout is an equally excellent match-up between WBC super middleweight champion Anthony Dirrell and former WBC champ David Benavidez. Those two will be squaring off to fight for Dirrell’s World boxing Council 168 pound title.

The winner of the Dirrell vs. Benavidez fight has the possibility of fighting the other super middleweight champions Callum Smith, Billy Joe Saunders or Caleb ‘Sweet Hands’ Plant.

“Shawn Porter is a guy who tries to rough you up. That’s what he’s always done,” said Spence at the kick off news conference. “With Yordenis Ugas he tried to box and he said he didn’t like that style. He said he is going back to his original style. If he brings that style to me, it’s going to be a great fight because I’m going to bring it right back to him.”

Porter, 31, must know by now that his best shot at beating Spence is to rough him up the way he did against Andre Berto and Paulie Malignaggi. When Porter recently changed his fighting style to box against Yorgenis Ugas and Adrian Granados, he struggled to win those two fights. He’s not a good enough boxer to beat the top tier welterweights by boxing. Granados is a fringe contender, and it was perplexing to see Porter boxing him instead of using his normal roughhouse tactics to win.

Spence: I want to clean out the welterweight division

“This is something I’ve been wanting to do, clean out the division, and get all the belts,” said Spence at the kick off news conference with Porter last Saturday. “I feel like Manny Pacquiao and Floyd Mayweather fought each other when it made sense, and it was a big fight. I feel like the same thing can happen with me and Terence Crawford in the future. Danny Garcia doesn’t have a title for me to fight him. I still want to fight Danny Garcia after I unify. I want to clean out all the top names in the division,” said Spence.

The winner of the Spence vs. Porter fight will move forward to fight the likes of Manny Pacquiao, Danny Garcia and Terence Crawford. Pacquiao defeated Keith Thurman last Saturday night to take his WBA title from him. That’s one less fighter the Spence-Porter will need to face to prove themselves as the best at 147. However, Pacquiao didn’t say whether he’ll agree to fight the winner of the Spence vs. Porter contest.

Pacquiao did say he’ll be attending the fight on September 28, which doesn’t necessarily mean that he’ll fight the winner. Pacquiao was present for Spence’s last fight against Mikey Garcia earlier this year on March 16 in Arlington, Texas. Manny entered the ring after the bout, and agreed to fight Spence next. But instead of fighting him, Pacquiao selected Thurman as his next opponent. A lot of boxing fans believe the only reason Pacquiao showed up at the fight was in hopes of Mikey winning. That’s the guy that Pacquiao wanted to fight, according to a lot of fans. If Pacquiao attends the Spence-Porter fight, he might just be going in hopes that Porter will get the victory, because he’s someone could potentially beat.

Spence isn’t aware what I can do says Porter

Spence is well aware of what Porter can do inside the ring. He’s seen Porter’s wins over Berto, Malignaggi and Devon Alexander. Those are fights that most boxing fans have seen. Porter roughed up those guys, and got the victories by using his size to bully them.

Spence says he’ll retaliate if Porter roughs him up

I can do the same thing with elbows and the head. If he’s going to try and fight like he did against Andre Berto using elbows and head-butts and try to rough me up, then we can do that too. It doesn’t matter. I’m more mentally strong than him. All across the board, I’m just a better fighter and boxer. It’s ‘Man Down,’ that’s my motto. I can box and get on my toes,” said Spence.

That would be a big disappointment for boxing fans if Spence and Porter start throwing elbows, and head-butting left and right on September 28. The fans want to see an actual fight not an MMA type of match.

Spence’s fight with Mikey Garcia brought in 400,000+ buys on PPV. Those are good numbers in a pay-per-view fight in this era. Whether the fans came to see Mikey or Spence is unknown. All we do know is a lot of boxing fans purchased the fight, and Spence had an easy time winning the fight.

It would definitely be a really bad idea for Porter to try and box Spence like he did with Yordenis Ugas and Adrian Granados. Spence is too good of a boxer for Porter to fight him in that manner. if porter does boxing Spence, then it would indicate that he lacks the confidence to win with his normal brawling style.

“Showtime Shawn Porter will put ‘Man Down’ and show you the truth,” said Porter in predicting a knockout win over Spence on September 28.

Porter isn’t a big puncher, and that means he’s going to need to throw a lot of hard shots for him to score a knockout over Spence While you can’t rule out the possibility of Porter knocking out Spence, but it’s not likely to happen. If Porter goes all out looking to get a knockout, he might get caught by one of Spence’s big shots and knocked out. Spence, 29, has the youth advantage over the 31-year-old Porter, and he’ll be looking to push a fast pace to get the win.

Spence: I’m knocking him out

“I’m knocking his a– out,” said Spence in giving his prediction of victory. “This same dude had a tough time with [Adrian] Granados. Every time he’s stepped up, he lost. The only person he stepped up and beat was Danny Garcia. When he fought Keith Thurman [he lost]. When Kell Brook came over here, he took the belt from him, and hurt him a couple of times. I’m going to beat you up. You know I’m going to punish you,” said Spence to Porter.

It’s not going to be easy for Spence to score a knockout of Porter, because this is a fighter that has never been stopped before. Spence can’t afford to fight the way he did against Mikey if he wants to knockout Porter, because he’s not going to do it if he only fights hard for a in the 9th and 10th rounds. That’s basically what Spence did, which is why Mikey was able to survive to the the full 12 round distance against him.