Shohjahon Ergashev vs. Abdiel Ramirez on August 23 on SHOWTIME 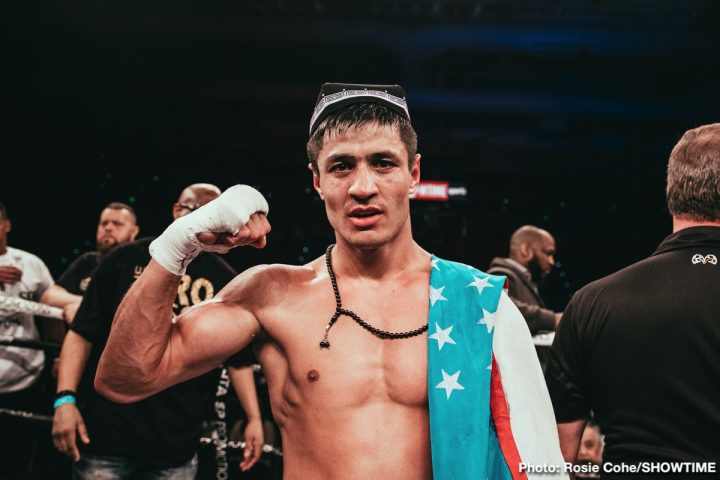 A pair of undefeated and top-10 ranked prospects will return to ShoBox: The New Generation in separate tests on Friday, August 23 to round out a tripleheader telecast live on SHOWTIME from Main Street in Broken Arrow, Okla.

Hard-hitting super lightweight Shohjahon Ergashev (16-0, 14 KOs) of Uzbekistan, who is ranked in the top-10 in three of the four major sanctioning bodies, will return for his third ShoBox appearance against power-punching Mexican Abdiel Ramirez (24-4-1, 22 KOs) in a 10-round bout.

In the opening bout, Ukrainian super bantamweight Arnold Khegai (15-0-1, 10 KOs) will return for his third test on the prospect developmental series. Khegai, who is now ranked No. 5 by the WBO and No. 7 by the IBF at 122 pounds, will take on once-beaten Russian southpaw Vladimir Tikhonov (17-1, 9 KOs) in an eight-round super bantamweight bout.

The outdoor event is promoted by Salita Promotions in association with Tony Holden Productions.

“This card epitomizes what we’ve been trying to do since launching ShoBox in 2001,” said Gordon Hall, Executive Producer of ShoBox: The New Generation. “We have three undefeated top prospects, all already ranked in the top 15, in step-up fights against their toughest opposition to date. A victory could put them a fight or two away from title contention, while a loss sends them back to the drawing board.”

“August 23 is going to be an action packed fight card with pick’em fights from top to bottom,” said promoter Dmitriy Salita. “We have hungry contenders on opposite sides of the ring looking to take the next step in their careers in classic cross roads matchups. It is one of the best fight cards of the summer.”

Ergashev coming off win over Fox

The 27-year-old Ergashev scored an impressive third round knockout in his ShoBox debut in 2018 against then top-10 rated Sonny Fredrickson. The former member of the Uzbek national team is coming off a 10-round unanimous decision over previously unbeaten Mykal Fox in February on ShoBox. The hard-hitting southpaw currently trains in Detroit with Javan “Sugar” Hill at the new Kronk gym with stablemate Vladimir Shishkin.

“I am training not just for a victory but for domination,” Ergashev said. “I want to put the world on notice that Shohjahon Ergashev is ready to ascend to the top of the junior welterweight division.”

The 28-year-old Ramirez has been a professional for 10 years and has 22 knockouts in his 24 victories, including knockouts in his first nine professional fights. In 2018, the Ciudad Juarez, Chihuahua, Mexico native scored a career-best eighth round knockout over the favored Michael Perez. The former two-time national Mexican amateur champion is coming off a close decision loss to Javier Molina on March 23.

“Mexicans bring their heart to the ring, and I am ready to give it all to win,” Ramirez said. “I have had excellent sparring and have already been in the gym for six weeks. I am excited to show everyone what kind of fighter I am, and I know my hand will be raised on August 23. Ergashev is just another stepping stone to bigger and better fights.”

The undefeated Khegai is a former Ukrainian national amateur champion and two-time world champion in Thai boxing. Born to Korean parents in Lymanske, Ukraine, Khegai is an aggressive, come-forward fighter with 10 knockouts in his 15 professional fights. The 27-year-old registered two victories in 2018 on ShoBox – an eight round decision over Adam Lopez and an eight round victory over Jorge Diaz. He’ll face his toughest test to date in the southpaw Tikhonov.

“I can’t wait to impress American boxing fans with a spectacular knockout on August 23,” Khegai said. “Vladimir is a good boxer and I know that he will come prepared to fight but my skills and my will to win will be bigger. I can’t wait – this is going to be a big year for me.”

The 29-year-old Tikhonov was a decorated amateur boxer in Russia, finishing with a record of 85-15 and a designation of “Sport Master of Russia,” a prestigious honor bestowed upon the country’s top athletes. He was an undefeated, consensus top-10-ranked super bantamweight heading into his ShoBox debut against Jesse Angel Hernandez in 2017. The Saint Petersburg, Russia resident suffered the only loss of his career against Hernandez but has since bounced back with a victory in Russia. He returns for his second fight in the U.S. as he looks to get back on track against the highly regarded Khegai.

Tikhonov says Khegai can be reckless

“I will be in the best shape of my life, I guarantee victory and redemption in my return to ShoBox,” Tikhonov said. “Arnold is aggressive and at times reckless. I will show him what boxing skills are all about. He hasn’t faced anyone like this before.”