Roach: Pacquiao will KO Thurman in 9th round 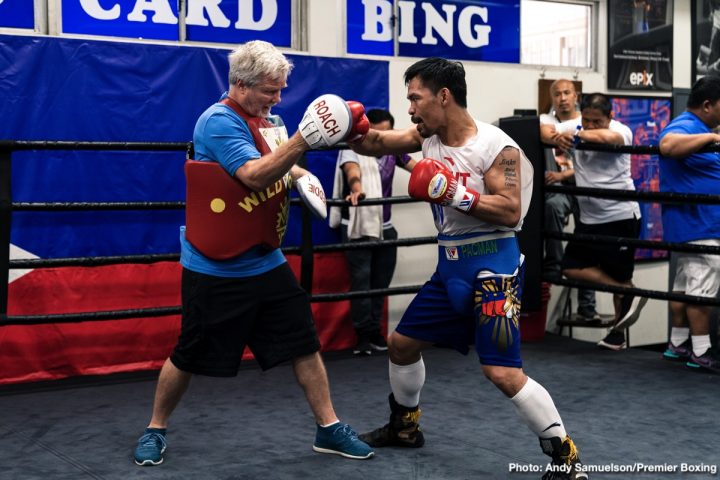 By Allan Fox: Freddie Roach is predicting an easy ninth round knockout victory for Manny Pacquiao against Keith Thurman in their fight on July 20. Roach says Thurman (29-0, 22 KOs) previously injured right hand isn’t the weapon that it used to be before he hurt it two years ago, and that he’s using it less now than he did in the past. Thurman used it in his last fight against Josesito Lopez, but it didn’t look like he was sitting down on his shots with that hand like he did against Danny Garcia in 2017.

Manny will be looking to hand WBA Super World welterweight champion Thurman his first career defeat when they face each other on Fox Sports pay-per-view on July 20 at the MGM Grand in Las Vegas, Nevada. Roach says he expects Thurman to “run” from Pacquiao in this fight once he starts getting hit. He feels that Thurman will want no part of getting hit by Pacquiao. Thurman didn’t use his right hand that often in his comeback fight against Josesito Lopez last January. One Time’s best punch was his left hook, but he didn’t throw that shot nearly enough to keep Lopez off of him. In the second half of the fight, Lopez had no respect for Thurman’s power, as he attacked him relentlessly in battering him with shots. Thurman got beat up worse in that fight in any other match in his 12-year pro career.

“You look at Thurman’s last three fights, he’s not really looked that good,” said Roach. “I really wonder about that right hand. He’s not using it very much as time goes by. His overhand right,” Roach said when asked what punch is Thurman’s best in his arsenal. “That might be gone.”

Thurman will need to prove that he can still use his right hand for him to defeat Pacquiao, because he’s not going to beat him with a jab and his left hook Keith doesn’t throw those shots often enough for him to slow down a high volume puncher like Manny. In Thurman’s last two fights against Josesito and Danny Garcia, he got beat up in the second half of those matches when he got tired. What saved Thurman in those fights was his footwork. He was literally running from Lopez from rounds six through twelve.

Thurman moved continuously, and held when they would get close. Lopez (36-8, 19 KOs) hurt Thurman in the seventh round with a left hook. With over a minute in the round, Lopez continued to nail Thurman with right hands to the head, and left hooks. It was a miracle that Thurman made it out of that round without getting knocked out, because he was hurt enough for the contest to be stopped. The referee let Thurman hang in there, but he might have been better off had he stopped the fight in order to protect him.

Lopez hit Thurman with a right hand that him seeing stars. How Thurman stayed on his feet is the big question because he was nailed with shots. Lopez isn’t one of the elite level welterweights, but his punching power is right up there with the biggest punchers in the division. He looks like he had better power than Terence Crawford and Shawn Porter. Errol Spence, and Danny Garcia might have a little bit more power than Lopez, but not by much.

Had that been a fighter with better legs like Pacquiao, he would have likely stopped Thurman, because he was hurt badly and just trying to survive. Lopez continued to work Thurman over in rounds 8, 9, 10, 11 and 12. It was a one-way beating that Lopez was handing out from the seventh round. The judges gave Thurman a gift in giving him a victory, because that fight could have been ruled a draw or a win for Lopez. It really helps being the A-side when it comes to the scoring for the fights.

Thurman won’t be a tough fight for Pacquiao says Roach

“Everyone says this is going to be a tough fight for Manny Pacquiao. I don’t think so at all,” said Roach.. Yep,” said Freddie when asked if Pacquiao is going to KO Thurman. “Nine,” Roach said in giving his prediction of the round Pacquiao will knock Thurman out. “Manny’s legs are unbelievable. His work ethic is great. That movement that he has is still there. Manny Pacquiao hasn’t slowed down a bit. I don’t think he’s [Thurman] is overconfident. He’s going to run,” said Roach in predicting that Thurman will be running from Pacquiao.

It’ll be a tough fight for Manny if he doesn’t go after Thurman continuously to apply pressure on him, because that’ what One Time needs for him to win. A passive Pacquiao will let Thurman build up a big lead, and then sit on it to get the win. Thurman’ last three opponents, Shawn Porter, Josesito and Danny Garcia, didn’t put enough pressure on him in the first half of those fights. This allowed Thurman to pot shot, and win a lot of rounds to build up what proved to be insurmountable leads. The first six rounds will be key for Manny against Thurman, because he could either win the fight during that time or give it away. What Thurman wants to do is build a big enough lead in the first half of the fight to allow him to coast for the last six, which is when he normally gets tired. Thurman will get on his bike, and play keep away from Manny for the last six rounds to win a close decision. Pacquiao cannot allow Thurman dominate the first half of the fight uncontested. Giving Thurman too much respect will be a mistake for Pacquiao.

“I think Manny will try and use his footwork, and jump in and jump out, throw combinations, and get out of the way before Thurman gets off,” said Mikey Garcia to esnewsreporting. “Thurman is strong. I want to see what Thurman does in the first couple of rounds if he tries to put pressure to make it a rough fight. Manny has combinations; five to six punch combinations. It’s not the same combination over and over. It’s different punches. Sometimes he comes with straight punches, sometimes with hooks, sometimes with uppercuts. He’s always switching up. That’s always difficult. That’s not someone you can always prepare for with the footwork and the angles.

Thurman won’t allow Manny to throw multiple combinations. That’s not happening. We’ll see Thurman moving around the ring, throwing shots to try and keep Manny off of him, and not stopping long enough for one or two punches to be thrown. Josesito stalked Thurman around the ring for the last six rounds of the fight, loading up on his shots with everything he had, and hurting him. Thurman was getting clobbered the entire second half of the fight.

Thurman’s legs really saved him against Josesito, but so did the scoring by two of the judges that had it 117-109 [Tom Schreck] and 115-111 [Steve Weisfield] for him. The third judge scored it a draw at 113-113 [Don Ackerman] That’s the same score Boxing News 24 scored the Thurman vs. Lopez fight.  Pacquiao needs to hope he doesn’t get scoring like we saw in the Thurman-Lopez fight, because he won’t win under those conditions unless he knocks him out.

“Everyone that fights Manny says it’s like fighting two different guys,” said Mikey. “Eight guys. The power,” said Mikey when asked what Thurman brings to the table that could cause Pacquiao problems. “Although he’s not known for his counter punching and boxing, he does have great movement. His power is what he has going for him. One punch, that’s all it takes,” said Mikey.