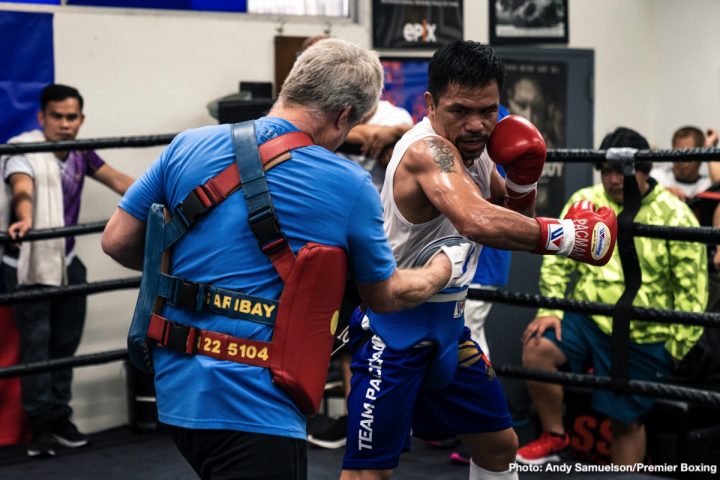 By Kenneth Friedman: One of the sparring partners for Manny Pacquiao, Arnold Gonzalez, says Manny is training at a higher level for his match against Keith Thurman than he did in his previous fight against Adrien ‘The Problem’ Broner last January, and he’s predicting a knockout victory for the Filipino superstar on July 20.

Gonzalez can really see the difference in Pacquiao’s game from this present training camp for the Thurman fight compared to when he trained for Broner last January. It’s a different Pacquiao.

Gonzalez says, “Thurman’s in trouble” in this fight. Thurman has riled Manny up with him using biblical verses to trash talk him, and it’s resulted in Pacquiao getting more motivated to train harder in order to knockout ‘One Time’. Pacquiao is more serious for this fight than he has since his fight with Miguel Cotto in 2009.

Manny looks like a different person in training camp compared to how he’s looked in his last 15 fights. It’s hard to imagine Pacquiao training harder for the Thurman fight than he has in his matches against Juan Manuel Marquez, Floyd Mayweather Jr., Tim Bradley, Shane Mosley and Antonio Margarito, but that might be the case. None of those fighters were talking about wanting to crucify Pacquiao, or to obliterate him and send him into retirement. Although Pacquiao understands that Thurman is trying to sell the fight, the comments that he’s been making has gotten him energized to beat him on July 20.

You can argue that some of the stuff that Thurman is saying are things that actually wants to do. He wants to stop the 40-year-old Pacquiao, and send him into retirement. Moreover, Thurman says he wants to score a fast knockout over Manny, which would help his career. Juan Manuel Marquez received a huge career boost after knocking out Pacquiao in the sixth round in 2012. If Thurman can do the same thing, his career could take off as well.

“He’s in shape, and well rested. Thurman is in trouble,” said Pacquiao sparring partner Arnold Gonzalez to Fighthype. “I think he’s going to get a stoppage [of Thurman]. I think he’ll stop him in the 10, 11 or 12,” said Gonzalez about his prediction of Pacquiao knocking out Thurman. “He’s getting sharper, not stronger. He’s getting a lot sharper. He’s happier. I think a happy Manny is a dangerous Manny.“

Pacquiao’s trainer Freddie Roach hasn’t given any hints of what the game plan is for the Thurman fight, but it’s obvious that applying pressure will be a key ingredient in Manny’s game on July 20. Thurman struggles when his opponents put him under unrelenting pressure. The problem is, many of them wait too long.

Manny a lot more active for this camp says Gonzalez

Pacquiao had fewer reasons to be motivated for his 12 round contest against Adrien last January, because he hadn’t won a fight in two years. You don’t want to say Broner is over-the-hill, but he’s clearly descending rapidly from where he was in the prime of his career in 2013 before he suffered his loss to Marcos Maidana. It looked to some like Pacquiao was taking it easy on Broner rather than going after him to knock him out the way he’d done against other opponents during his 24-year career.

This is Thurman’s first pay-per-view fight of his 12-year pro career, and he’s trying to get the boxing public interested. The more fans take notice of the Pacquiao-Thurman fight, the more PPV buys it’ll generate. That means more money for Thurman. Unfortunately for Thurman, a good deal of the promotion for the Pacquiao has come down squarely on his shoulders. Pacquiao isn’t a great talker, and his trainer Freddie Roach isn’t as verbal as he once was. There’s no one else that is able to help promote the Pacquiao-Thurman fight with trash talking other than Thurman. Consequently, he’s doing his best job of getting the fans interested by saying whatever he can to shock people.

Thurman selling the fight by being a troll

Unfortunately, Thurman, 30, is going over the top by saying stuff that fighters normally wouldn’t. Thurman has become a troll character by saying things for shock value to get headlines. It’s obviously working, but it’s more than a little off putting to many boxing fans. Pacquiao doesn’t care for the way Thurman is going about drumming up interest in the fight, even though it’ll benefit him financially in the end. Every big fight needs a ‘good guy’ and a ‘bad guy,’ and Thurman has decided to take on the ‘bad guy’ role to get fans excited about the card.  Pacquiao was never going to take that role, because he’s a politician, and it’s not in him to become a character to sell his fights. He is lucky that he’s fighting Thurman, because he’s doing all the promotional work for him.

“I won’t go to camp with anyone unless it’s Manny Pacquiao, or like, an icon like him,” said Gonzalez. “I’m not a sparring partner, besides with Manny. Honestly, it’s not even about the money, it’s about the experience, and being around greatness.”

Pacquiao and Thurman be battling on Fox Sports pay-per-view on July 20 at the MGM Grand in Las Vegas, Nevada. The undercard is loaded with talent.

Here are the Pacquiao-Thurman undercard fights

Joe Joyce hopes to fight for world title within a year »