LIVE STREAM: Pacquiao vs. Thurman, Plant vs Lee – Weigh In 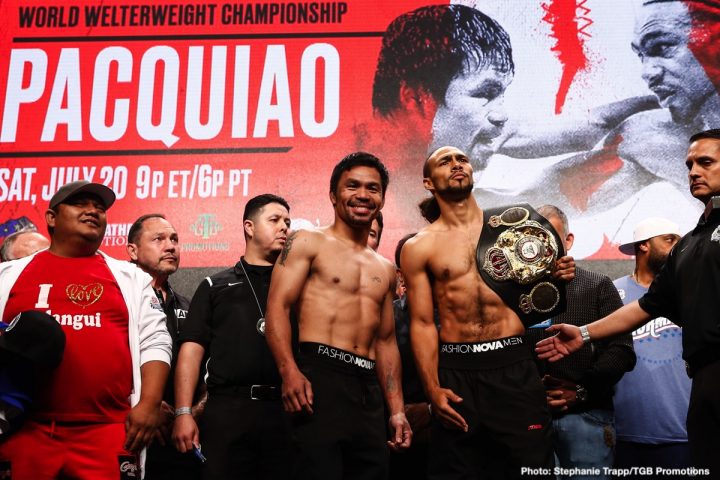 NEWS:   Keith Thurman says he's a "Dragon in a dungeon waiting to be released" on Feb.5th

FOX Sports PBC programming begins Wednesday, July 17 (7:00 PM ET) on FS1, FOX Deportes and the FOX Sports app with the one-hour FOX SPORTS PBC PAY-PER-VIEW PRESS CONFERENCE: PACQUIAO VS. THURMAN, as host Abdo is joined by Mancini and Porter to preview the fights on the card and interview fighters. Androl and Lennon Jr. preside over the press conference.

Boxing programming continues Thursday, July 18 (7:00 PM ET) on FS1, FOX Deportes and the FOX Sports app with the one-hour FOX PBC PRESS CONFERENCE: CALEB PLANT VS. MIKE LEE, as host Abdo is joined by Mancini and Garcia to preview the fights on the card and interview fighters. Androl and Ray Flores preside over the press conference.

On Friday, July 19, the FOX SPORTS PBC PAY-PER-VIEW WEIGH-IN is telecast on FS1, FOX Deportes and streaming on the FOX Sports app at 4:00 PM ET, with host Abdo and analysts and Mancini, Porter and Spence Jr. on the desk, previewing the fights. Lennon Jr. hosts the weigh-ins on stage, while Androl interviews fighters onsite.

On Saturday, July 20 (5:30 PM ET) the four-part PBC FIGHT CAMP: MANNY PACQUIAO VS. KEITH THURMAN airs the final episode on FOX, following the two champions through their final preparations for the title fight.

The evening’s action wraps up on FS1 at 1:00 AM ET with the FOX SPORTS PBC PPV POSTFIGHT SHOW as Myers, Abdo, Mancini and Wilder recap the fights and Androl interviews winners.

LAS VEGAS – Leading up to boxing’s biggest night of the summer, FOX Sports will live stream three undercard bouts on Saturday, July 20 from the MGM Grand Garden Arena in Las Vegas leading up the FOX PBC FIGHT NIGHT. The bouts will be streamed on FOXSports.com, the FOX Sports PBC on FOX YouTube channel, Facebook page and Twitter starting at 4:45 PM ET. They will also be available via the FOX Sports Pay-Per-View stream starting at 6:00 PM ET.

Leading up to the fights, PBC fighters offer unique, behind-the-scenes clips on the FOX PBC social pages. Follow @PBConFOX on Twitter, Facebook and Instagram for all updates throughout the #PBConFOX fights Saturday. Watch for the FOXRingPass, taking viewers behind the scenes and into the action on both Instagram and Facebook Stories.


« LIVE STREAM: Whyte vs Rivas, Price vs Allen – Weigh In