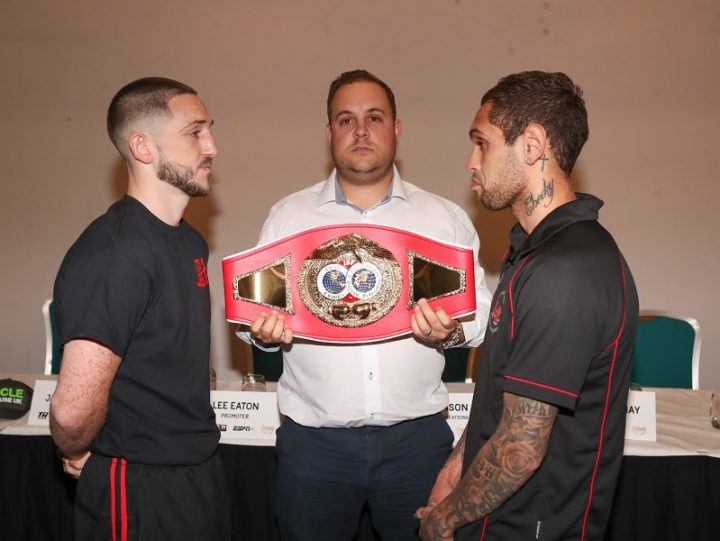 Jazza Dickens made it clear to opponent Nathaniel May at today’s press conference that they will be going to war when they meet for the vacant IBF European featherweight title on Friday’s huge #MTKFightNight show at the Liverpool Olympia.

Dickens (26-3, 11 KOs) faces May (21-1, 12 KOs) live on ESPN+ in association with Top Rank and also live on iFL TV, while there is a packed card including the likes of Terry Flanagan, Martin Murray, Tasha Jonas, and many more.

“I take my hat off to him for coming over. He speaks about ‘if we go to war,’ but we are going to war. There’s no question about it. I’m looking forward to it.

“I love fighting in the Olympia, it’s a great place to box. Eight months ago I was walking in Miami with a bag and nothing else wondering where my shot is. I came back to Liverpool and the opportunities have come. All of the hard work has paid off.”

“Anything can happen in this sport. I’m fit and ready to go. If he wants to go to war we can, if he wants a boxing match we can do that too.

“I’m already on that world level, with the head space I’m in I’ll fight for a title any time I want. I’m in my opponent’s hometown, bring it on.”

“Throughout my career I’ve gone on about having targets and wanting to fight certain people. I’m in a good place mentally and physically, any fight for me is a bonus.

“I’m enjoying training. The training camps have been great. It’s about getting in there and enjoying myself. Training has gone well. You’re going to see a happy fighter in there on Friday and it will show.

“The decisions have never affected me too much. I’ve got a lovely family and wife, so there is no reason to let boxing stress me out. It did do when I was looking at different world title fights.

“The start of this year is the first year where I’ve started the year not putting myself under any stress or pressure, and by doing that I’ve been able to strip things back and value what’s important to me.”

“I’m confident I could still win a world title at 10 stone, but I’m back at lightweight where I made five straight defences of a world title. I believe I’m the best lightweight fighter in the country, if not one of the best in the world.

“I’m not one for shouting my mouth off. I like to box and let my boxing do the talking. I take every fight serious. I never look past anyone and that’s where I am today. My opponent comes for a fight and it will be an exciting night.”

“At the amateur level, when you get to the elite stage you don’t get to box at home much. It’s great that as a professional I’ve been able to box here so much. I want to continue to do that.

“I’ve come back from a loss last year, I’ve moved on since then and got better. I’m still learning the craft of professional boxing, hopefully get a world title shot before the end of the year.”

“What I wanted from 2019 was to get exposure and get a title. It couldn’t have gone any better. I’ll hopefully put on a boxing show and use my jab. No more fights like the last one!

“The division is stacked with names from Britain. I want to be involved in them now and with the exposure and title, a lot more people will be willing to fight me.”

“At the start of the year I was nearly 14 stone. Mentally and physically I was in a terrible place. I lost my focus and lost my way, and was depressed severely.

“I’ve got myself back in the gym and back active. I fought a few weeks ago on the other MTK Global show, and since then I had one day off and was straight back in the gym. I’m nearly a stone lighter again, and I’m making my way back down to super-featherweight.

“I feel I can still win major titles. The only thing that’s stopped me from reaching the heights I want to reach is inactivity. If I stay active, hopefully people will see the best of me.”

“It’s great to be back in Liverpool with a great show. Headlining is a true 50/50 fight between Jazza Dickens and Nathaniel May.

“We’re also delighted to welcome back the hugely popular Martin Murray, along with Terry Flanagan, who takes on the dangerous Jonas Segu.

“We have the history making Olympian in Tasha Jonas, and I think this year’s we’re about to learn how big a role she plays in women’s boxing.

“There’s Sam Maxwell who has turned into an internet sensation after his last round knockout, plus the likes of Ged Carroll, John Quigley, and Craig Glover, so it’s a stacked card.”