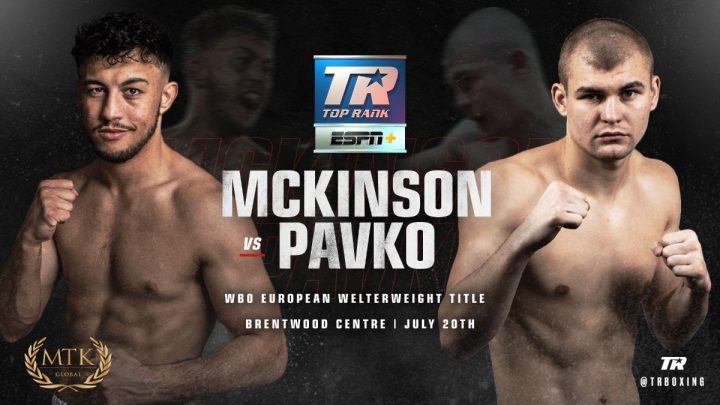 One of Great Britain’s most promising welterweights, Michael “The Problem” McKinson, is ready to conquer Europe. McKinson, a native of Portsmouth, England, will take on Russian veteran Evgeny Pavko in a 10-rounder for the vacant WBO European welterweight title on the latest edition of #MTKFightNight Saturday from the Brentwood Centre in Brentwood, England.

“This is a good bout,” McKinson said. “Nobody in Britain wanted to fight me, so we’ve had to go the harder route and take on a dangerous Russian.”

McKinson (16-0, 2 KOs), a slick southpaw, is taking a step up in competition after winning both the WBC Youth and WBC International silver welterweight belts in less than five years as a professional. He last fought March 9 at the Brentwood Centre, outboxing Ryan Kelly over 10 rounds. Pavko (18-2-1, 13 KOs), from Kopeysk, Russia, is 2-0 since moving up from the super lightweight division. Unbeaten in three career fights outside of Russia, Pavko has not fought in seven months. Last December, he stopped the previously undefeated Fedor Vinogradov on cuts following the fifth round.

In other action scheduled for ESPN+:

Feared welterweight Michael McKinson admits taking on dangerous Evgeny Pavko is a risk but is fully confident of taking the Russian to school.

‘The Problem’ (16-0, 2 KOs) is one of the most avoided fighters in the UK having already cruised to WBC world Youth and WBC International Silver honours. On Saturday night, he bids for WBO European glory.

After scouring the domestic scene for a viable rival in vain, McKinson plays host to heavy-handed Pavko (18-2-1, 13 KOs) on tomorrow’s busy #MTKFightNight at the Brentwood Centre – live on ESPN+ in association with Top Rank and on iFL TV.

Ahead of an intriguing 10-rounder, McKinson said: “I had to take this unknown gamble. He’s a massive puncher but I’ve taken gambles since I’ve turned professional so if people want to run and hide then step aside because I’m coming through.

“Yes, Saturday night is a gamble but I know it’s one that’s going to pay off because I’m 100% certain I’ll come out the victor.

“I’m fully focused on Pavko and have been for weeks. Once I take care of him in impeccable fashion, then we can start knocking on doors and mentioning other names again. I’ll take care of business and then talk again.

“I’m so confident going in to Saturday. I can’t wait to prove all those people who still doubt I’m the real deal wrong. Again.

“I’m doing big things for Portsmouth. I’m always flying the flag for them and now I’m fighting a Russian, everyone will be backing me in my bid to protect British pride on Saturday night.”

ESPN+ is the multi-sport, direct-to-consumer video service from The Walt Disney Company’s Direct-to-Consumer and International (DTCI) segment and ESPN. It reached 2 million subscribers in less than a year and offers fans thousands of live events, on-demand content and original programming not available on ESPN’s linear TV or digital networks, along with premium editorial content.

ESPN+ is available as an integrated part of the ESPN App (on mobile and connected devices) and ESPN.com. They are the industry-leading all-in-one digital sports platform, delivering a rich, personalized experience to tens of millions of fans every month.