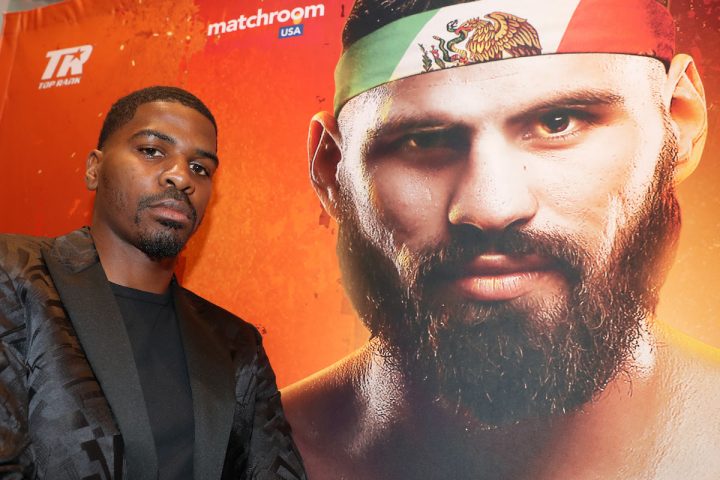 Hooker (26-0-3 17 KOs) fights in his Dallas backyard for the first time as a World champion following three fights in enemy territory. Hooker puts his title on the line for the third time after ripping the crown from Terry Flanagan in Manchester, England last June and traveled to Oklahoma City to get off the canvas and stop Alex Saucedo inside seven thrilling rounds in November. ‘Mighty Mo’ met Brooklyn’s Mikkel LesPierre in Verona, New York in March, flooring the unbeaten challenger in the ninth round of a dominant points win.

Jose Ramirez to have his title up for grabs

Ramirez (24-0 16 KOs) also puts his crown on the line for the third time having landed the vacant title at Madison Square Garden in New York in March 2018 against Amir Imam. The 26 year old’s first two defenses were on home soil in Fresno, putting Antonio Orozco on the deck twice in a points win in September and then a tight contest with Jose Zepeda in February where he held onto his title via majority decision.

Houston-based rising talent Austin ‘Ammo’ Williams (2-0 2 KOs) is in action for the third time in the paid ranks, and the impressive 23 year old can make it three straight first round KOs in his home state.

A stacked undercard in support of the main event will see more World title action added to the card which already features the hotly anticipated debut of Murat Gassiev, who moves up from Cruiserweight and meets Philadelphia’s Joey Dawejko.

Roc Nation Sports today announced that featherweight boxer Tramaine Williams (18-0, 6 KOs) will return the ring in a ten-round match for the USBA and WBO Latino Jr. Featherweight Championship on July 27th at the College Park Center in Arlington, Texas where he will take on opponent Yenifel Vicente (35-3, 27 KOs). “All or Nothing,” a live championship boxing event presented by Matchroom Boxing and broadcast live on DAZN, will also feature several additional fights including RNS fighter and WBO Jr. Welterweight Champion Maurice Hooker in the main event against WBC Champion Jose Ramirez in a Jr. Welterweight Championship unification bout.

This becomes Williams most critical fight of his career, as a win over Vicente in Dallas could lead to a world title fight later this year for the New Haven, Conn.-native.

In his last fight on June 29, 2019, Williams claimed victory over Neil John Tabanao (17-6, 11 KOs) of the Philippines by ten-round unanimous decision at Foxwoods Resort and Casino in Mashantucket, CT. Williams is optimistic about the approaching fight after winning in his home state earlier this summer.

“I am proud and excited to be joining the Hooker-Ramirez card on July 27th in Dallas,” said Williams. “This will be my biggest fight to date, and I look forward to showing the world what I can do. I’d like to dedicate this fight to one of my inspirations, the late boxing legend Pernell Whitaker, as I learned so much about the sport from watching him fight. I looked up to Pernell and even modeled my boxing style after him. In addition to a victory, my hope is to make Pernell proud and pay him tribute on the 27th.”

“The first time I saw Tramaine Williams fight it was amazing to me at how similar his style was to Pernell Whitaker’s,” said Roc Nation Sports boxing promoter Dino Duva. “It was a little strange, as I had never seen someone even close to ‘Sweet Pea’ in style and defensive ability. I am heartbroken over Pernell’s passing; he was family and my favorite fighter of all time. I can’t think of anything more fitting right now than for Tramaine to win the toughest and most important fight of his career as a tribute to Pernell ‘Sweet Pea’ Whitaker. If Tramaine is victorious in this bout, I believe he will be in line for a world championship bout soon. As always, I also want to thank our friends Eddie Hearn and Matchroom, along with Lou DiBella and DBE for working with us to present this great undercard match. It will be a great night of boxing”

Tickets start at just $25 and the pre-sale starts at 10am (CDT) from www.utatickets.com

There are five pre-sale ticket codes for the event: MMH, JCR, AMMO, MBUSA and UTA

Tickets then go on general sale at 10am (CDT) on Friday June 14 from www.utatickets.com