Khan wants a big name for next fight

By Kenneth Friedman: Amir Khan still hopes to get a big name for his next fight on November 8 if Manny Pacquiao chooses not to fight him next. Khan says he was told by his team that Manny had signed the contract for a fight with him, but apparently he was mistaken.

That fight isn’t happening, but he would still very much like to face the 40-year-old Pacquiao.

Khan says these are the fighters he’s interested in facing next:

If Pacquiao chooses not to take the fight, Khan says he wants another big name to fight him in Saudi Arabia. Khan beat former featherweight champion Billy Dib by a fourth round knockout earlier this month on July 12 in Jeddah, Saudi Arabia.

Khan says he was told Pacquiao had signed

“I was told by my team that there was contracts being signed. That’s the reason why I mentioned it at the press conference,” said Khan to Fighthub. “Otherwise I would have never said that. If the fight happens, it happens,” said Khan about Pacquiao. If it doesn’t happen, then there are other names out there. I’m just going to take my time and see what’s out there for me,” said Khan. “There’s still some great fights out there for me.”

His hosts were pleased with the results of the fight, and they want to have Khan fight there again. He wants to fight someone better for his next performance in that country. That’s where Pacquiao comes in. He would be the ideal opponent for Khan to fight if he agrees. Money talks obviously. If Pacquiao is offered enough money, he could be tempted to face Khan unless he gets a better offer from someone like Floyd Mayweather Jr.

“I had a date on November 8 in Saudi Arabia in Riyadh, I’ll be focusing on that but I’d love it to be Manny Pacquiao, if it’s not Manny Pacquiao we move on to someone else,” said Khan to Sky Sports News.

Pacquiao would want a big payday for him to fight against anybody, but perhaps it’s possible that the money can be found to accommodate him in Saudi Arabia. Khan would finally get his wish in fighting Pacquiao, and he can get the last laugh for the doubters that thought he would never face Manny.

“if that doesn’t happen, then a Danny Garcia rematch is another one which could happen,” said Khan.

Khan isn’t the only one that doubts that the Mayweather vs. Pacquiao rematch will take place. A lot of boxing fans think Mayweather won’t come out of retirement to face Manny, because he’s protecting his unblemished 50-0 record. Losing that perfect unbeaten record would be a hard blow for Mayweather to take, and it’s unlikely he’ll put himself at risk of that happening now.

“If I was advising him, I wouldn’t have him go straight into a rematch,” said Khan about Anthony Joshua in talking about wanting to keep him away from Andy Ruiz. “I’d have him take one or two fights, and build his confidence back up. Jumping back in might be a little bit of a risk, but I still feel Anthony Joshua is a better fighter.

He’s a stronger fighter. He’s a bigger name by far, and overall boxing skills-wise, he’s a lot better,” said Khan about Joshua. “It’s just that one shot that caught him that he never recovered from. I think it was early in the fight. That’s boxing. One punch can change a fight, and it did in that fight,” said Khan.

Former IBF/WBA/WBO heavyweight champion Anthony Joshua has already decided on taking the rematch with Andy Ruiz Jr., and that fight is likely heading towards Cardiff, Wales later this year. Both fighters want it. Ruiz would prefer that it take place in the U.S, but it appears that Joshua’s promoter Eddie Hearn has it written in their original contract from June that they can decide where the rematch will take place.

Hearn wants Joshua to have an advantage of Ruiz the second time around, because he failed miserably in their first fight. It not help Joshua. If the referee can’t hold Ruiz back, Joshua might be in for another beating. The last time Joshua fought in Cardiff, his opponent Joseph Parker was prevented from fighting on the inside by the referee, who kept pulling him away from Joshua.

Joshua will knockout Ruiz in the mid-rounds

“So if Anthony Joshua sticks to his game plan and is smart, and stays away from those big shots that Ruiz is going to throw, I think he’s going to make it easy work, and maybe knock him out with a shot in the mid-rounds,” said Khan. “I just feel Joshua is the better fighter, and the bigger fighter. I favor him going into this rematch,” said Khan.

It’s possible Joshua can win the rematch, as Khan says, but it’s not likely to be “easy work” as he says it’ll be. Joshua didn’t dominate Ruiz at any point in their fight last June. AJ’s jab wasn’t good enough for him to control the contest from the outside. The best thing that Joshua did all night was land a hard left hook that dropped Ruiz in round three . The shot caught Ruiz by surprise, and put him down hard. However, that punch work up a sleeping giant, because Ruiz immediately went after Joshua with vengeance and knocked him down twice in the round. 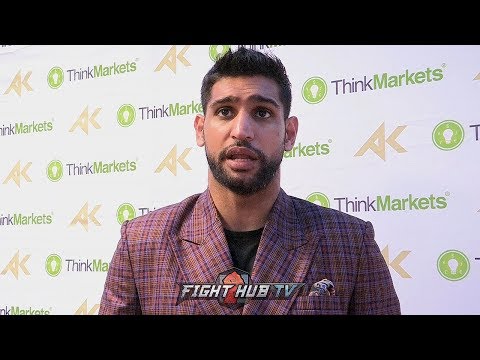