Gallagher vs. Jenkins in Belfast on August 3 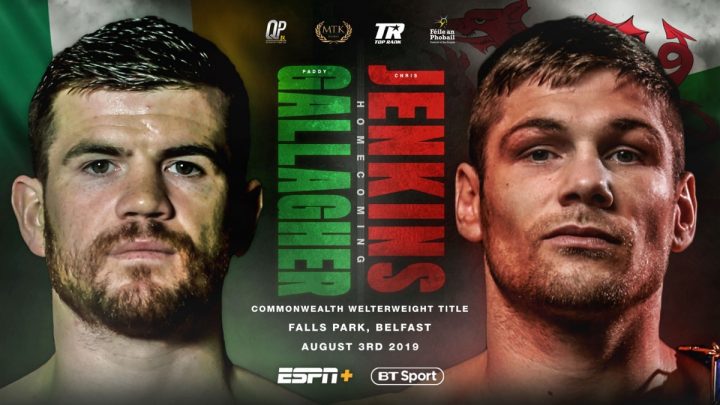 Paddy Gallagher has revealed he’s seen weaknesses in Chris Jenkins’ game – but is keeping his cards close to his chest ahead of their British and Commonwealth welterweight title fight on next week’s huge #MTKFightNight at Feile an Phobail.

While Gallagher admits he is planning for a gruelling battle against Jenkins, he has also spotted a potential kink in his opponent’s armour, but is keeping coy about what may be.

Gallagher said: “I’ve seen weaknesses but I’m not going to give them away. I want to have every advantage I can going into this fight.

“Regardless of that, I’m still expecting 12 hard rounds and I’m really going to have to work for the win and produce my best performance.

“I’m fully concentrating on Jenkins. The titles being on the line are great, but all I’m focused on is getting the win against Jenkins.”

Belfast favourite Paddy Gallagher has a title showdown with Chris Jenkins at the city’s colossal Féile an Phobail card in Falls Park on August 3.

After his career-boosting three-round stoppage of previously-unbeaten Liam Wells last time out, Gallagher is delighted to be part of a unique event in his home city.

Gallagher said: “Jenkins is a good fighter and he’s coming off the back of a smashing win. I’ve met him once and he’s crazy so I’m sure the press conference will entertain as well as the fight.

“The last fight did me so many favours – it was a good opponent, a good performance and a good win. It earned me this shot so that speaks volumes.

“The coverage of this fight will be unreal with both BT Sport and ESPN+ linking up. Féile is always a massive thing but this year, with the boxing show included and me being in a big fight, it’ll be even better than usual.”

Jenkins, who is looking to add the Commonwealth belt to the British title he won against Johnny Garton in March, is equally enthusiastic.

Jenkins said: “To be honest with you, it has come out of the blue, a bit like the fight against Johnny Garton did. Because I am always in reasonable shape and like to keep fit, I jumped at it.

“I have had a lot of downtime now, letting my British title win sink in and then getting out and meeting people. I am trying to get my face out there because I might not be the most popular boxer out there in terms of turning up at events and such because my life is gym, work and then home to family.

“I know Gallagher is a Commonwealth gold medallist who beat Callum Smith and he has also beaten another Welshman I know in Tony Dixon. He is coming off a good little win against Liam Wells so I know he is a strong fighter and a good fighter.”

Joining Gallagher vs. Jenkins on a stacked bill is world-ranked Conlan’s step up against Ruiz plus potentially career-defining showdowns between Luke Keeler vs. Luis Arias and Alfredo Meli vs. Araik Marutjan.

One of boxing’s brightest prospects Dennis McCann will showcase his wares on the #MTKFightNight at Féile an Phobail on August 3.

In his first two professional bouts – a vicious early knockout win and a schooling of a fighter with a winning record, ‘The Menace’ has shown different elements to his well-documented talent.

Now the 18-year-old, who is promoted by Frank Warren, gets a chance to shine on another huge stage; the undercard of Michael Conlan’s homecoming against dangerous Argentinian Diego Alberto Ruiz in Belfast’s Falls Park.

Ahead of a scheduled six-rounder, McCann said: “I’m hugely excited to be added to this bill. I’ve got some family over the water there and I’m looking forward to performing for them and all the fans in Belfast.

“I love the bright lights, the big nights and believe I’ve already shown I can entertain the crowds. My first fight was a quick-fire stoppage and in my second, I had him going to the point he was holding on for dear life.

“I hope on August 3, I can serve up another thrilling victory for everyone in the park and those tuning in around the world. I’m still a teenager but I’m building myself a name pretty quickly.”

Professional Development Coordinator Jamie Conlan said: “We welcome Dennis onto this historic bill and believe he’ll provide another treat for every single spectator.

“You only have to look at his first two professional victories to know that ‘The Menace’ has every gift a fighter can have. We believe he’s going places and it’s great he has this huge stage on which to showcase himself.”

Boxing » Press News » Gallagher vs. Jenkins in Belfast on August 3