By Charles Brun: Anthony Joshua’s promoter Eddie Hearn says the rematch with IBF/WBA/WBO heavyweight champion Andy Ruiz Jr. will be taking place on December 14 in Cardiff, Wales.  Hearn says he’ll be contacting Ruiz’s team in the next few days to tell them the date, and the venue for where the Joshua-Ruiz rematch will take place in Cardiff. However, it’s no secret that Hearn wants to bring the fight to the Principality Stadium, in Cardiff.

Putting the Joshua-Ruiz rematch in Cardiff is already being viewed by boxing fans on social media as a way to help guarantee a win for Joshua if it goes to the scorecards. It looks bad for Joshua not to go back to Madison Square Garden in New York for the rematch, because the perception the fans have is AJ needs help to beat Ruiz. When Lennox Lewis lost to American Hasim Rahman, he went to the U.S to avenge his loss. Lewis didn’t insist the rematch take place in the UK. 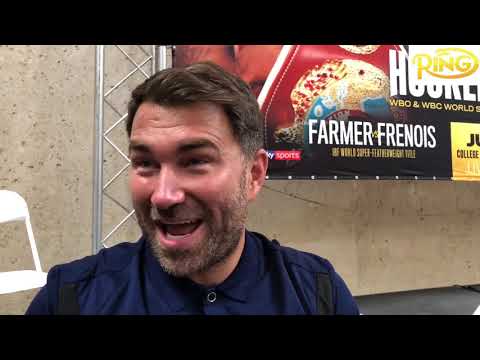 Joshua vs. Ruiz rematch will take place on December 14th in Cardiff

“It’s the contractual obligations for Andy Ruiz that he has to fight a rematch,” said Hearn to Fighthub. “He was given the opportunity to fight or a world title out of nowhere. We picked him off of a list. So have the respect to honor what you agreed, which he will, by the way. I have absolutely no doubt he will. Andy Ruiz is a good guy. He’s a stand up guy. He’s an honorable man, but he does have people in his ear, saying, ‘Don’t, blah-blah-blah.’ But again, everybody that signed the contract is aware of their obligations. I do believe the fight will take place on December 14th in Cardiff. We’ll have to see if this is finalized, but it’ll be finalized very soon,” said Hearn.

For the boxing fans that may not remember, the Principality in Cardiff is the same venue where Joshua’s two controversial fights with Joseph Parker and Carlos Takam took place. Both fights involved referees that arguably changed the outcome of the fights with moves that many fans felt where questionable. In Joshua’s fight with Parker, the referee prevented inside fighting, which greatly helped AJ to the point where Parker was completely negated. in the Joshua-Takam fight, the referee jumped in and stopped the fight in the 10th round, and gave Joshua a stoppage win. Takam looked unhurt, and confused at the decision by the referee to stop the fight.

Ruiz Jr. wants the rematch with Joshua in California, New York or Mexico. As the winner of their June 1 fight, Ruiz Jr. feels that he deserves to make the call for where the second fight takes place. Hearn doesn’t agree with Ruiz. He’s going by what the contract says, and saying Joshua has the final say in where the rematch will take place.

“This might be a disadvantage having more pressure [by staging the fight in the UK],” said Hearn. “He [Joshua] just fought Andy Ruiz in his country, the U.S. I know he’s of Mexican descent, but he’s born and lives in the U.S. This time he’s going to fight in the UK. There will be more pressure in the UK. For me, there’s actually less pressure to do the fight at Madison Square Garden [in New York]. You got beat there. If you lose, you probably say, ‘I should have fought back in England.’ Then you go back there and fight in England. If you lose, it ain’t great.

So, I think there’s actually added pressure on Joshua doing it in the UK. I just think it’s the decision of the training team to say, ‘You know what? This is probably where you should do this fight.’ That’s or him [Joshua] and [trainer] Rob McCracken to look at,” said Hearn when asked if Joshua should make some changes with his training team. “Those guys are joined at the hip. They’ve [Joshua and McCracken] been together since his amateur days. They’ll be together for the rest of his career,” said Hearn.

AJ hasn’t come out and said that he doesn’t want the rematch to take place in the UK, and that suggests that he’s on board with his team’s decision. If Joshua wanted the Ruiz Jr. rematch to take place in the U.S, it would be a simple thing for him to overrule their choice of the UK, and bring it back to America. Given that Joshua isn’t forcing the fight to go back to America, it gives an indication that he’s fully behind his team’s choice of staging the rematch in the UK. Does Joshua need to fight in the UK for him to win? That’s the magical question.

“Anthony Joshua knows he has to adapt,” said Hearn. “We don’t know in that fight [Ruiz Jr.] was it the strategy? Was it the mindset? Was it confidence? All those different things. Was he taking too long? It was probably a mix of everything, really. He’s a different animal in this fight. I know that just talking to him. He [Joshua] wasn’t up for the first fight. Everybody was saying to him, ‘When you beat this guy, when are you going to fight [Deontay] Wilder?’ ‘I’ve got to take care of Ruiz.’ So he puts him [Ruiz] down. He gets back up. Andy Ruiz gets hit with a right hand when he gets up that would have shook most trees. So, Ruiz has got a great chin, but Ruiz gambled.He took a chance, and he deserves credit for that. He won.

He was the better man on the night. Nothing surprises me in boxing. I never ruled out Anthony Joshua losing. He’s learning. He’s not the finished article. I know Andy Ruiz is a good fighter. That’s why we took the fight. He [Joshua] wanted a real fight. He wanted to give the fans a real fight. Unfortunately, we should have taken an easy fight, but we’re going to win the rematch,” said Hearn.

The only thing Joshua can try to do in the rematch with Ruiz Jr. is to say on the outside, and use his jab to keep from getting worked over in close. Joshua has a good jab, but not good enough to keep Ruiz Jr. off of him. That’s the problem, and it’ll continue to be an issue in the rematch. Ruiz Jr says Joshua doesn’t move well enough to keep him from getting in close to land his combinations, and that’s what he plans on doing.

These are the things Joshua needs to beat Ruiz:

These are all things that Joshua can’t change. They’re all resistant to change, and Hearn doesn’t realize that. Joshua’s stamina will never be good, and neither will his punch resistance. He’s had problems in those areas since he turned pro in 2013, and it’s futile to expect that Joshua will suddenly fix those issues.

Joshua will fight Wilder if he beats Ruiz Jr. in rematch

“I think nothing is guaranteed,” said Hearn when asked if Wilder will fight Tyson Fury. “Someone might lose the fight coming up. I like Fury. I like Wilder. They’re great for the division. I think right now there are at least 10 heavyweights that can beat each other. Yeah, it’ll be interesting to see that fight if it happens. If Joshua beats Ruiz, then he’s going to fight Wilder to be undisputed. If Ruiz beats Joshua, then he’ll fight Wilder for the undisputed. [Oleksandr] Usyk is coming in. There are so many great fights to make in the division,” said Hearn.

It’s clear that if Joshua and Deontay Wilder win their crucial fights, they’ll face each other in 2020. Wilder must win his next three fights against Luis Ortiz, Tyson Fury and Dillian Whyte to get a crack at the winner of the Joshua vs. Ruiz Jr. rematch. For Joshua’s part, he only needs to beat Ruiz Jr. to set himself up to battle the last man standing that holds the WBC title. It’s easier said than done that Joshua will defeat Ruiz on December 14, but it’s possible. Now that Hearn has set things up for Joshua to fight in Cardiff, Wales, it puts him in a situation where he’s going to have things in his favor. If Ruiz Jr. doesn’t knock Joshua out, he could well lose a controversial decision.

“He does that, and then he puts another Tweet out just after, saying ‘if the fights in the UK, I’ll still win, blah-blah-blah,'” said Hearn about Ruiz Jr. Tweeting on social media, and saying that he’s not going to fight Joshua in the UK in the rematch. “I don’t want to disrespect Andy Ruiz or talk about the contract situations, but he knows the contractual situation, and we’ll let his team know where that’ll take place. I do think it’ll take place in the UK, and I do think it’ll take place on December 14th. But we’ll confirm that to his team in the next few days,” said Hearn.

Ruiz Jr. is an old school fighter, who believes that the winner of a fight should be able to dictate where the rematch will take place. Through the history of boxing, that’s how things have gone. Hearn and Joshua are flipping that old custom upside down by insisting the losing fighter, AJ, be the one that dictates when and where the rematch will take place with Ruiz Jr. It obviously looks bad, because it makes Joshua appear to need the advantage for him to win. If Joshua can’t win on the road, then what kind of fighter is he? There are already a lot of boxing fans that believe that Joshua would have been eliminated two to three times in the 2012 Olympics if the competition that year didn’t take place in London, England. Italy’s Roberto Cammarelle, Cuba’s Erislandy Savon and Kazakhstan’s Ivan Dychko all appeared to beat Joshua.

Ruiz Jr. will be sued if he doesn’t fight Joshua next

“He’d [Ruiz] be sued for a lot of money,” said Hearn about Ruiz Jr. if he chooses not to fight Joshua next. “Anyone that touches him or the fight, whether it’s broadcasters or fighters, would also be brought into the ring of danger. So, it would be disastrous, and they know that. Actually, the only conspiracy of the whole thing is him saying, ‘I’m the A-side. I should dictate where it goes.’ Everybody that signed the contract, including Andy Ruiz, knows exactly the contractual obligations. So it’s not a case of me saying, ‘If you don’t fight, you’ll be sued.’ That’s a given, but there is no issue.

Our team, their team have been talking throughout; they know their obligation. Andy Ruiz has a few people in his ear over in California telling him this and that. He got an opportunity to fight for a world title out of nowhere, and the purse for that fight, and the rematch purse, which was negotiated actually. It wasn’t a case of us telling them, ‘There’s the money; take it or leave it.’ They negotiated the rematch purse, so they know what they’re getting. It’s a lot of money, and he believes he can win,” said Hearn about Ruiz.