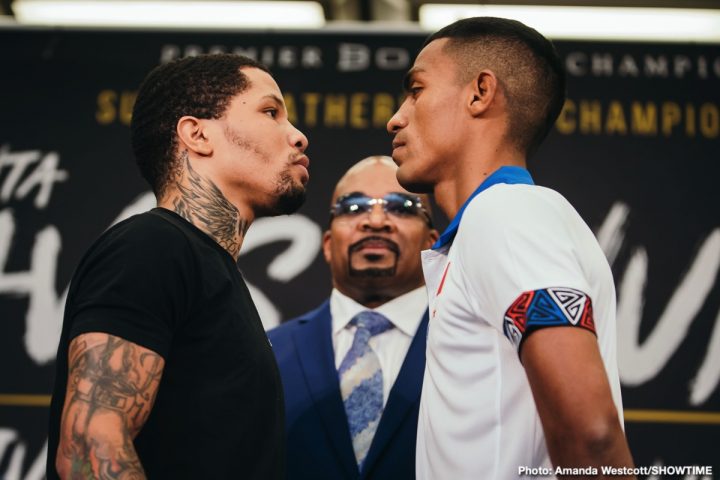 Tickets for the event, which is promoted by Mayweather Promotions and TGB Promotions in association with GTD Promotions, can be purchased at Ticketmaster.com and at the Royal Farms Box Office Monday through Friday from 10 a.m. ET to 5 p.m. ET.

Davis vs. Núñez is the first world championship in Baltimore in nearly 50 years and Davis will become the first champion from Baltimore to defend his title at home in nearly 80 years. Davis has been fully embraced by his hometown leading up to his championship defense, including a ceremony at City Hall on Wednesday where Mayor Bernard C. “Jack” Young presented him the the Key to the City.

Here is what the press conference participants had to say Thursday from the Baltimore Convention Center:

“Coming back to Baltimore and bringing this big event to the city means a lot. I’m training with my brothers that I grew up with and I’m around family and friends. It’s exciting.

“The main reason why I wanted to come back home was because of people getting killed in this city. I want to be seen as one of the people who can bring the city together on a positive note. I fought in LA, London and New York, so it was about time for me to come home.

“Camp has been great. I can’t wait to put on a show Saturday night. I appreciate Núñez for taking this fight. This undercard has great fights and possible future opponents for me. I’m just soaking it all in right now.

“July 27 we’re going to put on a great show, me and Núñez. We both have big knockout power and may the best man win. I hope he’s ready, because I was born ready.
“I had a hard camp, so I don’t think it’s going to go past five rounds. I’m in a good space in my career and I’m excited to get in the ring.

“He’s a confident fighter with a lot of knockouts. We’re taking him seriously. It’s going to be a great night. He’s coming to take my spot. He’s coming up into my house, so I’ll be ready.

“People are going to see that I’m serious on Saturday. The rest of the division and everyone calling me out better be ready too. It’s all business on Saturday.

“It feels amazing to have this support from my city. I’m working my way up to being a big star and it’s unbelievable. I’m anxious and excited to get in the ring. I don’t want to rush the moment, because I should enjoy it. I’m soaking it all in.

“I know I’m facing a good fighter who can crack. I’m not taking him lightly at all. Mentally and physically I’m all-in. I have the whole city on my back and I have to come in there and show up on Saturday.

“I believe that Núñez is excited to be a part of this. He’s not scared and he’s enjoying the moment like I am. Hopefully he’s at his best Saturday night, but he won’t know how good I am until he gets in the ring. Right now it’s a game to him, but we’ll see Saturday night.”

“This is my first time in the United States and Baltimore is a beautiful city. I’m excited to bring a great fight to these fans. It’s my first time fighting for a world title and I’m happy to take advantage of it.

“I’ve had a strict diet and strong training camp. We’re going to give the fans a great party on Saturday night and it’s going to be a great fight.

“I have a high knockout percentage and I know that I can knock Gervonta Davis out. When we get in the ring, we will see who’s the best. He’s the champion, but I’m here to take the victory. I’m here to win.

“Losses make you stronger. The loss I had made me more focused on the sport. I’ve worked harder in my training camp since then.

“We’re a few days out from the fight and I’m ready to knock him out and win the title. Anything can happen in the ring, so I hope he’s ready. The world is going to know who I am after this fight.

“I’m very confident about this fight. It’s going to be a great fight but I will get the victory. I’ve been in the gym working harder than I ever have. I can’t speak for him, but I hope he’s worked hard too.

“My style is to wait to see how my opponent fights and then adjust from there. No matter what, I’m a hard puncher.

Nunez: This is going to be a big spectacle

“Saturday night it’s going to be a big spectacle. My entire country is going to be watching. I think we are going to see a knockout, not sure in what round, but we may get one.

“Hardship led me to boxing. When my first daughter was born I was unemployed, I worked construction to make ends meet. I found boxing soon after and here I am.

“We’ve watched tape on Davis. We have studied him, broken his style down and we have a solid game plan. He’s not going to see me coming.

“My idol in boxing is my fellow Panamanian Roberto Duran and I want to do be able to do the things he has for our country. I’m here to make a great name for myself and my country.”

“This is a wonderful fight and a wonderful opportunity for me. We’re ready and Team Gamboa has made great efforts to prepare for this fight. I’m ready to get this victory on Saturday night.

“My focus is completely on Martinez. After this fight, we’re definitely looking to fight Gervonta Davis next. We’re going to be prepared for that fight too and we’ll be ready to come out with a victory there too.

“I think he brings a lot of experience to the table but so do I. I think it is going to be a very good fight because we’re two boxers with great experience. On Saturday, we’re going to find out who is the best.

“I am not in the prediction business but I have prepared and I am going to give my best on Saturday.”

“I’ve had a very good camp for this fight. I’ve been working hard since my last fight. I’m facing a good fighter in Gamboa, but I have everything I need to take the victory back to Puerto Rico.

“I’ve kept getting stronger and kept in good shape since my loss. I think all of that work will show itself in the ring on Saturday.

“We’ve sparred with people who move and have similar styles to Gamboa’s. I think that’s going to help me expose some of the defensive flaws that my opponent has.”

“I had a great camp. I’m prepared to fight a former world champion and a warrior. Jezzrel is a tough competitor. He’s done something that I’m trying to do, which is become a world champion. He’s a great stepping stone for my career.

“On July 27 I’m ready to showcase my skills and talent. I’m here for a reason. I come from a rough background but I’m here now. Whatever it takes to come out victorious on July 27, I’m ready.

“I feel like I have the power to stop Corrales. His chin has been suspect his whole career. He’s gone down in a few fights. I respect him because he’s a true champion, but I feel like his chin is suspect. I want to go out there and test it out.

“I know that Corrales is here trying to make his presence felt. What he’s done, doesn’t mean anything to me. I know what I’m capable of. This is nothing new to me. He’s going to be in for a rude awakening Saturday night.”

“I want to thank everyone who made this opportunity possible. This was a great training camp and I worked hard to perform at my best on this stage.

“We’re here to fight and I’m well prepared to take the victory home on Saturday night. My power and my preparation is going to be the difference in this fight.

“I have everything that I need to beat Miller on Saturday. He’s never faced anyone like me. My experience and the strength will be like nothing he’s ever seen.

“In the ring, anything is possible. When you have heart and go into the ring, you can make anything happen. I’m more than ready to leave it in the ring on Saturday.”

“Thank you for everyone coming out. Baltimore is a city that has raised world champions and the city continues to prosper with this very special homecoming this Saturday night featuring Baltimore’s own, Gervonta ‘Tank; Davis taking on Ricardo Núñez.

“This is more than two fighters going head to head in the ring. This is an inspiration to Gervonta’s hometown, and his fans and peers coming behind him, that anything is possible, even when the odds are against you.

“This is an event where we all get to witness what a historic and iconic city Baltimore is, and one that hasn’t seen a world title defense from one of their own in almost 80 years. It is a homecoming for our two-time world champion Gervonta ‘Tank’ Davis and Mayweather Promotions is really looking forward to promoting our first boxing event here in this city that has birthed a star with a fight of this magnitude.

“We’re rolling out the red carpet at Royal Farms Arena, and ladies and gentlemen, I promise you from top to bottom that this will be a very very entertaining and exciting card.”

“Let me start off by asking a basic question. Why are we here? We’ve got a really strong three card fight, that’s obvious. We’ve got a little of everything. We have an Olympic Gold Medalist, we have three former world champions, we’ve got six quality fighters in the lighter weight divisions and we’ve got great match-ups.

“Coach Calvin is reserved and quiet. He certainly doesn’t talk about himself a lot. I am glad to see that he is getting the recognition that he deserves, not just as a boxing trainer, but as a trainer of young men, because that is what is at the heart of what Calvin Ford does at his gym. It’s not about building world champions in boxing, it’s about building world champions in life. This is a little taste of the spotlight for coach Calvin and I’m happy to see him get it because he does 99.99 percent of his work outside of the spotlight with no one watching and no one giving credit.

“The other reason we’re here is because of Gervonta Davis. The story about Gervonta starts for me in 2014 when Leonard and Floyd Mayweather first brought him to my attention. Obviously Gervonta and Calvin had been working together well before that and as long as I’ve known ‘Tank’, he’s talked about coming home to fight in Baltimore. But what’s really impressive about that is that this is not just about fighting at home, it’s not just about doing it for fans, it’s not just an ego thing. This is about giving back to his community because the reality is, this is not just a fight.

“This is an entire event that will produce massive financial benefits for Baltimore. We are all here because of these two men’s’ desire to be here. If ‘Tank’ hadn’t insisted to do this, then none of us are here and the community is not reaping any of the financial benefits that come along with this.” 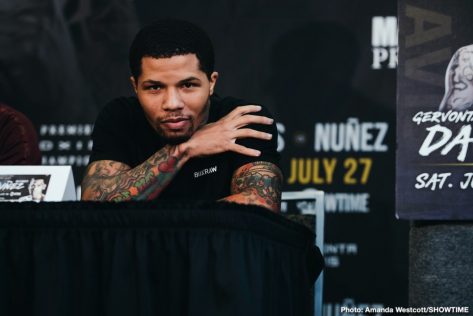 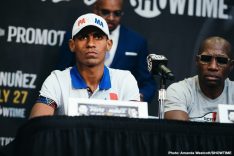 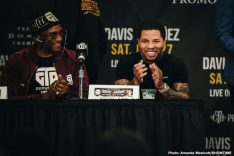 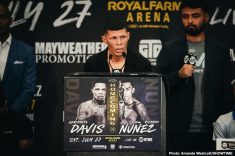 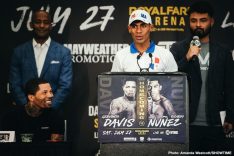 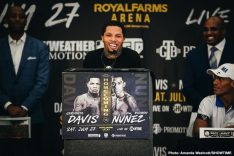 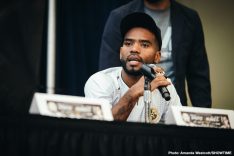 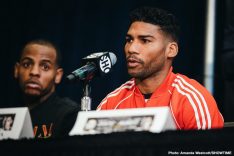 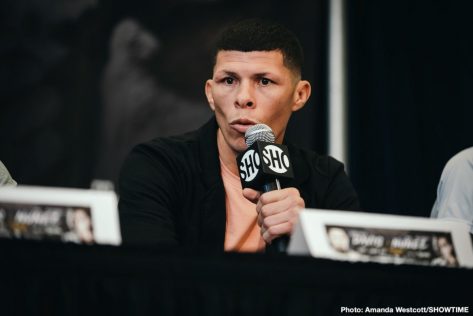 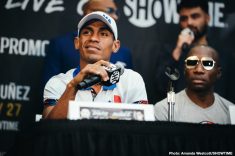 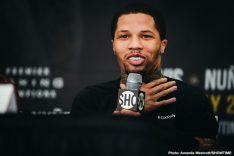 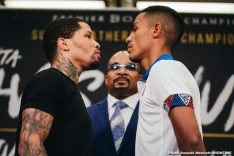 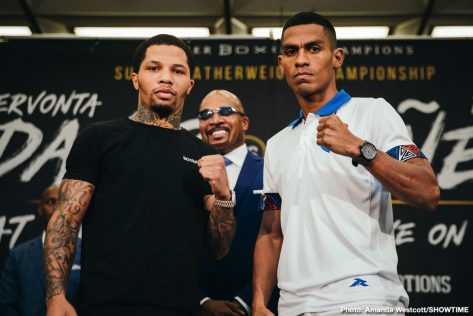 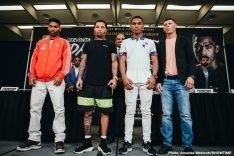 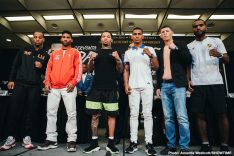 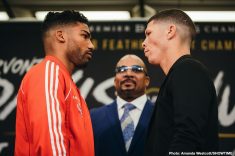 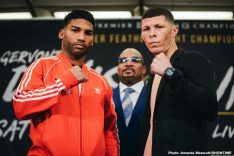 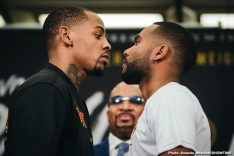 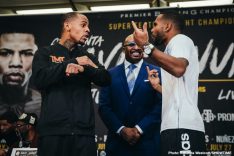 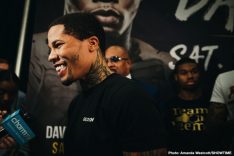 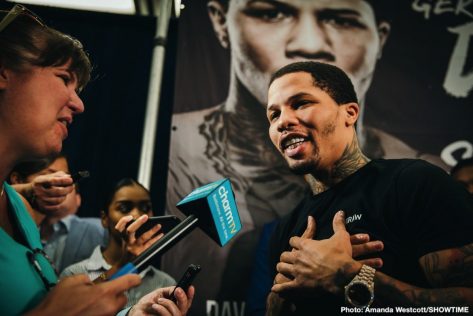 Tyson Fury could face Charles Martin next Fall on ESPN »