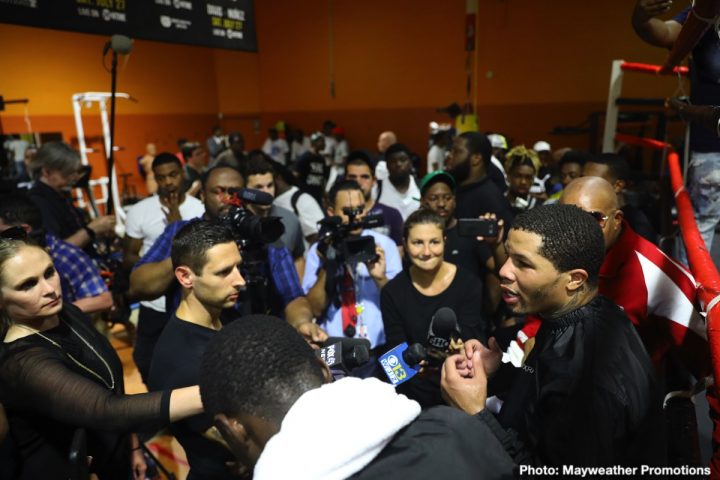 SHOWTIME Sports has released all three installments of the new digital franchise, THE RISE, which profiles boxing’s champions and stars of tomorrow as they grind their way to the top. This debut offering features America’s youngest reigning world champion and a fighter on the cusp of superstardom, Gervonta Davis, in advance of his hometown title defense this Saturday, July 27, live on SHOWTIME.

THE RISE digital series is created specifically for Snapchat and Instagram TV platforms and designed to reach young audiences with short-form, deep-dive, authentic storytelling, THE RISE: GERVONTA DAVIS is a three-part series that is also available on the SHOWTIME Sports YouTube channel and SHOWTIME Boxing Facebook page.

THE RISE is the latest in a collection of digital offerings from @ShowtimeBoxing that delivers an exclusive look at the personalities, training camps and fight nights of boxing’s biggest names and future stars. Other original, digital-exclusive franchises from SHOWTIME Sports include DAY IN CAMP, FIGHT NIGHT, THE APPROACH and RING RESUME, an all-encompassing lineup of content available on SHOWTIME Sports online platforms and tailored specifically for a digital audience.

In part one of THE RISE: GERVONTA DAVIS, viewers go back to where it all started for “Tank,” Upton Boxing Club in Baltimore. Davis speaks of unimaginable levels of violence and drugs on virtually every corner and shares how his love for boxing and his coaches and teammates kept him on the path to greatness.

Davis takes viewers through both the highs and lows of his young career in part two. From knocking out Jose Pedraza to become the youngest world champion at the time at just 22 years old, to being stripped of the title for missing weight, “Tank” opens up like never before.

In the finale, Davis speaks about what his hometown title defense means to the city of Baltimore and gives viewers an inside look at his training camp with coach Calvin Ford.

The last Baltimore-native to make a title defense in his hometown was Harry Jeffra, a featherweight world champion who defeated Spider Armstrong in July 1940 at Carlin’s Park to retain his belt.

At 24-years-old Davis is America’s youngest reigning world champion and has proven he has the star power to put Baltimore on the map as a significant fight city. The first world champion from Baltimore was Joe Gans, who was also the first African-American world champion in boxing history when he won the lightweight title in 1902.

“I believe it’s time for me to fight in front of my hometown and thank them for supporting me,” Davis said. “I never thought a fight in Baltimore would be this big. It gives me chills, but I’m ready for it. It’s a big test. I’ve been gone for so long and coming home feels amazing.”

This will be just the second time that the power-punching southpaw has fought in his hometown since turning professional in 2013.

Davis vs. Núñez is the first world championship in Baltimore in nearly 50 years. Light heavyweight champion Bob Foster defeated Mark Tessman by knockout at the Baltimore Civic Center in June of 1970 and the city hasn’t hosted another world title fight since. The historic night will also be the first SHOWTIME boxing event held in Baltimore in the network’s 33-year history

Baltimore Civic Center has hosted great fights in the past

“These guys from the past really motivate me, and I give much respect to the guys before me and the ones after me,” Davis said. “But right now I’m laying the foundation to make history. It’s the people that I see every day in Baltimore that motivate me. I can’t think about anybody that was in the past or the future. We are all worried about what’s in front of us right now.”

ABOUT DAVIS VS. NÚÑEZ