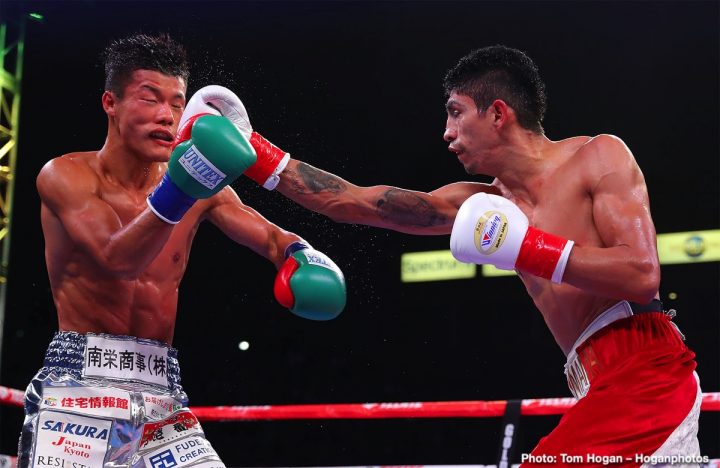 Undefeated super bantamweight champion Rey Vargas (34-0, 22 KOs) protected his unblemished record and extended his title streak with a dominating victory against Tomoki Kameda (36-3, 20 KOs) under the Southern California sky at the Dignity Health Sports Park in Carson, California, and live exclusively on DAZN. Mexico’s Vargas overcame the pressure from Japan’s Kameda en route to a unanimous decision victory, which marks the fifth successful title defense of his WBC Super Bantamweight Championship. In attendance was Los Angeles’ own Danny Roman who owns the IBF and WBA Super Bantamweight belts. Following his impressive performance on DAZN, Vargas called out Roman to face him in the Fall in a huge title unification fight.

In the co-main event of the evening, Ronny Rios (31-3, 15 KOs) sprung the night’s biggest upset with his knockout win against the undefeated Diego De La Hoya (21-1, 10 KOs), who could not continue after suffering the first knockdown of his career. Joet Gonzalez (23-0, 14 KOs) extended his undefeated rise in the 126-pound weight class by stopping Manuel Avila (24-1-1, 8 KOs) in the sixth round of their scheduled 10-round bout. Kicking off the main card on DAZN, veteran Roger Gutierrez (22-3-1, 19 KOs) shocked the Carson crowd with his first-round knockout victory over undefeated super featherweight prospect Rocky Hernandez (28-1, 25 KOs).

Below are quotes and results from the stacked DAZN card at Dignity Health Sports Park in Carson, California:

On his performance: “The idea was to throw a lot of punches and to have a very intelligent fight. I believe that we made this a very smart fight, an intelligent one. This is a boxer’s style, to fight with precision. I believe that he brought a lot of fans from Japan and that’s why they don’t agree with the decision.”

On why it was a difficult fight: “He mentioned before that he has all the experience. I knew that Kameda was going to push but again, we did a very, very smart fight.”

On who we wants to fight next: “Danny Roman. We need to unify titles, why not? I want all three titles. Danny, we are ready. I am ready whenever you want to fight. You know when a Mexican fights another Mexican, it’s a war.”

On why the crowd was on his side: “First of all, I want to say thank you to everyone. I recognize Vargas. I believe that he won the fight tonight and I respect him as a champion. He won. I need to learn and to practice more in order to get another chance to be champion again. I am very grateful for all the Mexican people. I want to be World Champion again.”

On his performance: “I feel great. It is an unbelievable feeling. Especially winning in front of my friends and family who came out here to support me – I want to thank you guys from the bottom of my heart. I did this for me, but I dedicate this victory to you guys.”

On what was different about tonight versus his last title shot in Carson: “To be honest with you, I think a lot of fighters tend not to focus too much on the mental side. I think this time, I felt very hungry and mentally focused. With other fights, I think I would overthink it and let it get to my head.”

On almost walking away from the sport: “I was in a dark place. It was very hard to come back but thanks to my team, especially Hector Lopez, who pushed me. He got me mad, he got me irritated at times. But man, he inspired me to come back and not for anyone else, but for myself. I am proof to fighters all around the world: no matter how many times you lose, you can still come back as long as you believe in yourself. No matter what – boxing, your career – just go for it man. I am not done. I still have a lot more years left. This was a hard camp, I pushed them. They told me to ease up. I would tell them that my opponent was outworking us and I kept pushing.”

On the finish: “I saw a lot of tape and noticed he has a really high guard. It leaves him open to the body. We were working on that in the gym a lot. Honestly, it was a shock. I didn’t know he was going down. I know Diego, he is a warrior and he’s never been down.”

On what he told the referee when asked if he wanted to continue: “I told him that I didn’t feel good. I don’t know what it was. I was hurt in my head. I didn’t feel well. I didn’t feel right. I did my best camp possible and I didn’t do that in the ring. You have to accept the losses just like you accept the wins.”

On why he was so confident: “Because I went for it, I work hard every day in the gym. All I do is sleep, eat and everything boxing. I am confident in myself so when I say I am going to do something, that is exactly what I am going to do.”

On his trainer telling him to finish Avila in the sixth round: “It was time to go. I could tell that by the second or third round, he was gassed. I knew he wouldn’t be able to box long. And I got him out in the sixth.”

On who he wants to fight next: “Any champion at 126. Anyone who is running their mouth, come down to 126 or come up or whatever. Everybody is running their mouth. Shakur Stevenson and JoJo Diaz. All I do is box, all they do is like to run their mouths on social media. Run your mouth face to face, do something then. They just say they are going to slap me around. That’s girly stuff, I’m a grown man. I want the belts first but I will give it to them, too.”

A message to the fans: “I hope you enjoyed the fight, I am going to keep working hard. I don’t care if I lose. I am not like these cherry pickers. I will fight the best and beat the best. I just want the champions and I will keep training hard to give you great fights.”

On how he won: “I won with my mentality. I came in here to rip his head off and that’s what you saw. It was my mentality that made the difference. Everyone on my team, my family, my parents, my children – they all believed in me. That’s how I did it.”

On if he felt he had a chance: “Yes, of course. I always had the mentality that I would be able to win and that’s why I did. I want to take the opportunity to greet everyone here in Los Angeles and let them know that the era of Roger Gutierrez has begun.”
—
WBC Super Bantamweight Title Fight – 12 Rounds
Rey Vargas (34-0, 22 KOs) defeats Tomoki Kameda (36-3, 20 KOs) via unanimous decision. (Scores: 117-111 x3) 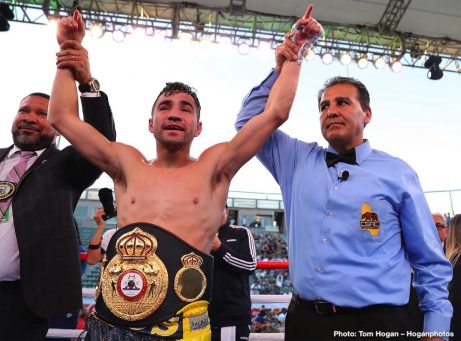 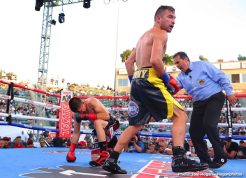 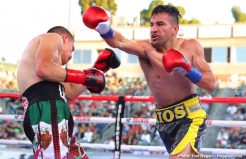 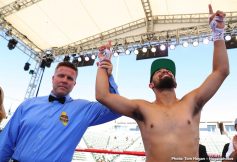 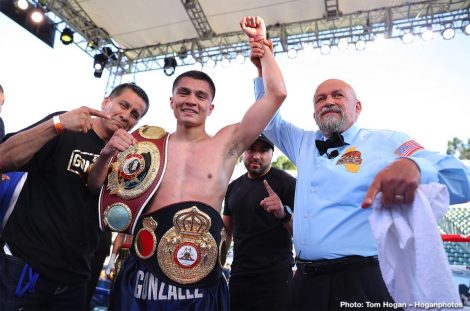 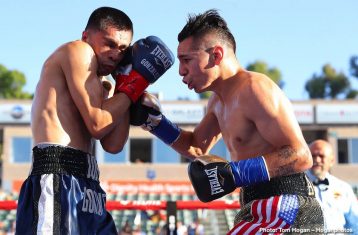 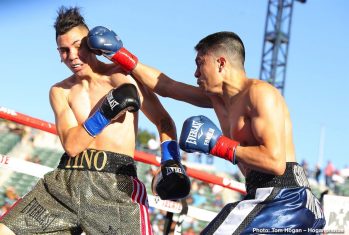 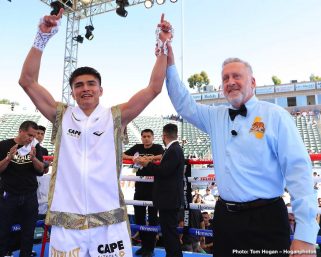 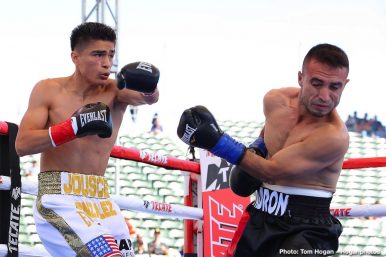 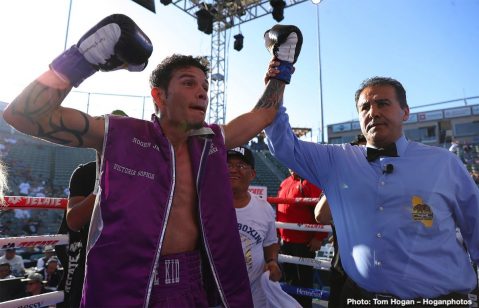 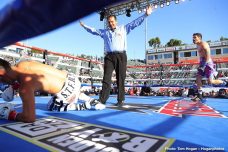 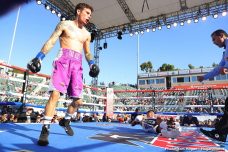 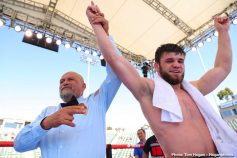 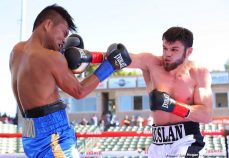 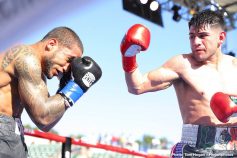 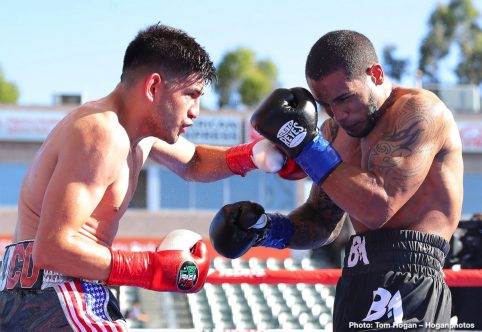 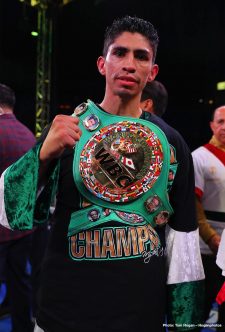 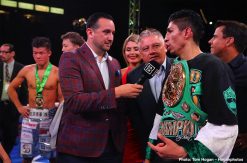 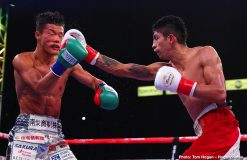 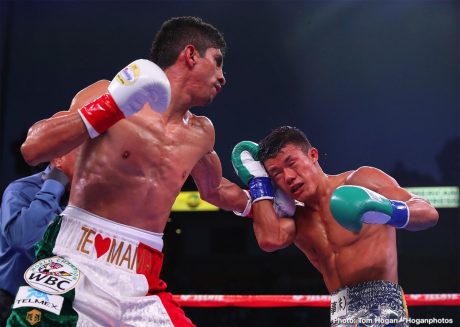 Boxing on DAZN returns next Saturday, July 20 when Dillian Whyte and Oscar Rivas square off in a heavyweight title eliminator, live in the United States in the afternoon. The full six-fight undercard begins on DAZN at 1 p.m. ET from The O2 in London.