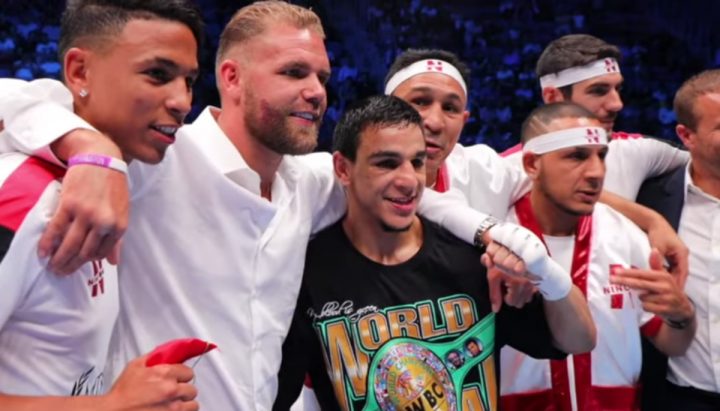 By Charles Brun: Two division world champion Billy Joe Saunders called out Gennady Golovkin on Saturday night after traveling to Kazakhstan to attend the bantamweight match between Nordine Oubaali vs. Arthur Villanueva at the Barys Arena in Nur Sultan.

The fact that Saunders (28-0, 13 KOs) was allowed to enter the ring to call out GGG makes you wonder if this was something that was orchestrated from the the promoters. Saunders was allowed to speak in the mic, and he given a lot of attention from the fighters, as if he was celebrity instead of an intruder looking to take advantage of the spotlight that was on Oubaali.

Golovkin vs. Saunders in Kazakhstan might not interest U.S fans

Saunders (28-0, 13 KOs) said he wants to fight Golovkin in his hometown in talking about wanting the contest in Kazakhstan. GGG originally grew up in Kazakhstan, but he now live in Los Angeles, California. It does GGG no good fighting back in former country of Kazakhstan, because he’s trying to get a trilogy match against Saul Canelo Alvarez for September. Fighting Saunders (28-0, 13 KOs) in Kazakhstan isn’t going to resonate with the American boxing fan, many of which have never seen the British fighter before, and they wont be thrilled at tuning in to watch the fight take place in the early afternoon instead of the evening. There’s a big time difference between Kazakhstan and the U.S.

“I want to fight their man Golovkin here,” Saunders said. “He’s a great champion, he’s a brilliant fighter. I’d love the opportunity to fight him in his home town. I’m going to sit down with my manager and promoter and go from there. I’m available and I’d love to fight here. Golovkin – I’m calling you out in your home country. I’d like to give the fans the fight they deserve, me and Golovkin.”

Will the networks get in the way of GGG vs. Saunders fight?

Golovkin (39-1-1, 35 KOs) attempted to put together a fight with Saunders in the past, but they couldn’t get the deal done. Now that Saunders, 29, fights on ESPN in the U.S, it’ll still be a fight that will be hard to make. It’s nice that Saunders is now the Word Boxing Organization 168 pound champion, but there’s now a network could foil the GGG fight from getting made. Golovkin recently signed a six-fight deal with DAZN in the U.S, and they might be thrilled at the idea of letting GGG fight on another network. DAZN is trying to bring in subscribers to their service. They won’t able to do that if half the fans will tune in to watch the Golovkin vs. Saunders fight on ESPN.

Saunders (28-0, 13 KOs) isn’t  well known with the casual boxing fans in the U.S. The casual American boxing fans won’t view GGG vs. Saunders as being a great fight for them to want to watch. This is a fight likely wouldn’t draw if it were on DAZN alone, but when you split the audience with ESPN, it’s potentially a bad deal.

Saunders’ fighting style would be a difficult one for GGG

Golovkin has looked slow in the past in trying to handle the little bit of movement that Saul Canelo Alvarez used against him in their first fight in 2017. Saunders is more mobile, and he would make it extremely hard for GGG to get to him. He’s also bigger than Golovkin. Saunders recently fought at cruiserweight last December against journeyman Charles Adamu. Golovkin has sparred with a lot of bigger fighters in the past, but he might have problems against a highly skilled defensive fighter like Saunders. It’s a bad match-up for Golovkin on paper. He’s not young at 37, and he’s coming off of an unimpressive performance in his fight against Steve Rolls on June 8.

With that said, if Golovkin is going to stay relevant as one of the top fighters in boxing, he’s got to be able to beat fighters like Saunders, Andrade, Jermall Charlo, Jacobs, Callum Smith, David Benavidez and Caleb Plant. Those are all fighters that are near Golovkin’s weight class. It looks bad if GGG isn’t open to fighting the best. He can’t continue to fight guys like Rolls and Vanes Martirosyan if he wants to be taken seriously by Canelo and the boxing public. If GGG is trying to cash out at the end of the remaining five fights on his DAZN contract, then you can give him a free pass, but he probably won’t get the fight that he wants against Canelo unless he takes a big risk against one of the top dogs like Saunders.

Golovkin needs a world title to lure Canelo to fight him

One positive out of Golovkin, 37, potentially facing Saunders is it would give him a shot at winning a world title at 168 and that he could use as bait to get Canelo Alvarez (52-1-1, 35 KOs) to face him. Canelo and his promoter Oscar De La Hoya told Golovkin that he needs to win a world title before they’ll consider putting together a trilogy fight in September. After hearing this, Golovkin turned around and did the opposite of what they asked him to do in selecting Steve Rolls from the the #15 spot in the WBC rankings at middleweight. Either GGG didn’t take Canelo and De La Hoya seriously in what they were asking him to do or he didn’t feel like he was up to the task in taking on one of the world champions at 160 or 168.

De la Hoya and Canelo clearly wanted Golovkin to face WBO middleweight champion Demetrius Andrade to take his belt from him so that it could set up a fight for the unified 160 pound championship. Since Golovkin didn’t do what they asked him to do, Canelo is now on the verge of fighting  Andrade (28-0, 17 KOs) to relieve him of his WBO title. In other words, Canelo is about to do Golovkin’s job for him. It goes without saying that Canelo is about to make GGG look incredibly weak by taking the fight that he wouldn’t take against Andrade to win the WBO belt. Golovkin can help ease the criticism he’s about to receive from boxing fan by taking on Saunders and beating him to win the WBO 168 lb title.

Saunders and Andrade are the same type of fighter

Andrade and Saunders are both seen as the same exact same type of fighters in the eyes of a lot of boxing fans. For all intents and purposes, Saunders is the 168 pound division’s version of Demetrius Andrade. So if Golovkin faces Saunders and beats him, he would be showing a lot of guts as well as talent. Canelo and his promoters at Golden Boy weren’t excited at the prospects of facing Saunders after the way that he embarrassed former IBF middleweight champion David Lemieux in December 2017 in Laval, Canada. Saunders totally out-boxed Lemieux in schooling him over 12 rounds.

Arum: If no Crawford-Spence fight, Terence will face the best available opponent in November »