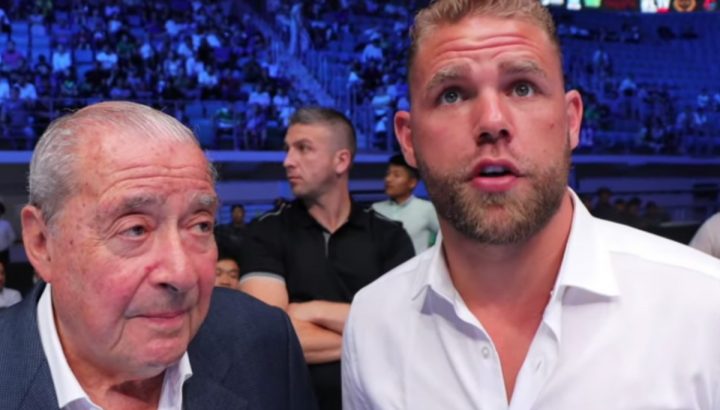 Saunders (28-0, 13 KOs) flew over to Kazakhstan last Saturday night to attend the Top Rank Boxing card headed by WBC bantamweight champion Nordine Oubaali vs. Arthur Villanueva.  Saunders entered the ring after the Oubaali-Villanueva contest and called out Golovkin (39-1-1, 35 KOs) for a fight. It’s unclear why Saunders didn’t call out Canelo Alvarez, because he would be the obvious better choice for him to have called out. GGG just lost to Canelo last September, and he came back and beat a little known Canadian named Steve Rolls last June.

Top Rank will be televising/streaming Saunders’ fights in the U.S.

Arum points out that Golovkin needs an opponent for his next fight, which is perhaps the whole reason that Saunders came to Kazakhstan in order to call out GGG. If Golovkin’s management accepts the challenge for him to face the unbeaten Saunders, then fight would be split between DAZN and ESPN in the U.S. With two networks potentially showing the Golovkin-Saunders fight, GGG’s next contest would receive more attention from American boxing fans, but it might not be the best deal for DAZN. They would have a split audience for the GGG-Saunders fight instead of them being the only network showing the fight. Golovkin vs. Saunders isn’t a big enough fight for it to be shown on two networks, and doing well on both. This isn’t a mega-fight on the level of Floyd Mayweather Jr. vs. Manny Pacquiao. Saunders is an unknown in the U.S, and Golovkin’s star has taken a nosedive recently with his two fights against Canelo Alvarez, and his decision to face Steve Rolls last June.

Although Golovkin is in need of an opponent, he probably won’t be too eager to face the crafty 2008 Olympian Saunders for his next fight. GGG hasn’t sounded particularly interested in taking any risky fights against good opposition since he started fighting Canelo in 2017. After their first fight, Golovkin fought Vanes Martirosyan last year in an obvious mismatch, and he easily beat him by a second round knockout. GGG was supposed to defend his IBF title against his mandatory Sergiy Derevyanchenko, but he chose not to take that fight and wound up losing his belt.

Golovkin then lost to Canelo last September. GGG could have then fought WBC interim champion Jermall Charlo or WBO champion Demetrius Andrade, but he chose to fight Steve Rolls. Golovkin hasn’t indicated a desire to fight Saunders lately, so one would have to conclude that it’s not a fight that can be made. GGG and his promoter Tom Loeffler said recently that their main priority is to make the Canelo trilogy fight for September. If that match can’t be made, then Golovkin would then look in another direction.

At the post-fight news conference after GGG’s win over Rolls, Golovkin talked about wanting to face an unbeaten contender at middleweight for his next fight if he doesn’t get the Canelo match That would mean that Golovkin might be facing someone like #3 WBC Kamil Szeremeta. He was one of the fighters that was in the running for Golovkin’s last fight on June 8. He’s obviously not the type of big name that Golovkin needs for him to get the Canelo trilogy fight, but it could be that he’s counting on DAZN putting the pressure on the Mexican star to force him to face him again. If DAZN does the work for Golovkin, then he won’t need to fight anyone good in order to get the third fight with Canelo. He can fight Szeremeta, and then still get the Canelo trilogy match. That’s a bad deal for DAZN if Golovkin fights Szeremeta, but it might work in their favor. Golovkin can surely beat Szeremeta without any problems. If DAZN insists that Golovkin fights someone good for his next fight, he could lose, and then that would ruin things for the streaming giant. They’re paying Golovkin big money to fight on DAZN, so they’re not going to want to see him lose before he faces Canelo in the trilogy match.

It would be a bad look on Golovkin’s part if he goes into the Canelo third fight with recent wins over Steve Rolls and Szeremeta, but it might not matter. Canelo recently beat Daniel Jacobs by a 12 round decision, and he’s now potentially on the verge of facing WBO middleweight champion Demetrius Andrade on September 14. WBO light heavyweight champion Sergey Kovalev was the guy that Canelo wanted to fight, but his co-promoter Arum says he’ll be defending against his mandatory Anthony Yarde on August 24 in Russia. Arum says the Canelo vs. Kovalev fight can take place in December.

Saunders: I’ve got to fight GGG

“We got to get them in the ring to see if they want a piece of me,” said Saunders to IFL TV about Canelo and GGG. “I’ve got to fight Golovkin. I can only do what I do, and keep winning. Big respect to them. They have their own paths, but if they put them in front of me; eventually our paths have to cross. Good luck to them. Hopefully, they’ll be a part of this someday to cement my legacy, to see who’s the best at the weight,” said Saunders.

It’s possible that Top Rank will be able to get Golovkin to agree to a fight against Saunders, but not too likely. GGG obviously doesn’t want to lose and end up not getting the third fight with Canelo that he so badly wants. Saunders is good enough to beat Golovkin, and make him look bad. Even if GGG beats Saunders, he could struggle and fail to impress even worse than in his last fight against Rolls. Saunders is a fighter that Golovkin would need a lot of rounds before he knocked him out, and might not be able to stop him. It’s a bad match-up for Golovkin, who has slow feet and hands. GGG’s not good at cutting off the ring against fighters with nimble feet. Saunders would likely follow the blueprint Canelo created in how to beat Golovkin by using movement, and occasionally coming forward to back him up. Golovkin gives ground easily when his opponents come forward.

Saunders has no luck in getting Callum Smith fight

“The last say so should go down to the fighter,” said Saunders complaining about his offer being turned down by Callum Smith. “Callum Smith is going to take an easier fight. I suppose they’re looking at John Ryder or somebody else,” said Saunders.

Saunders still wants the unification fight against unbeaten WBA Super World super middleweight champion Callum Smith. His offer was rejected by him. So now Saunders wants Smith’s promoter Eddie Hearn of Matchroom Boxing to make him an offer for the fight.

“They love me. I’m going to bust up their man Golovkin as well,” said Saunders about how well liked he is by the Kazakhstan boxing fans. “Instead of Callum Smith looking elsewhere, he doesn’t have to look any further. If you’re looking for a unification, let’s go,” said Saunders in sending a direct message to Callum.

Saunders thinks Callum might want an easy fight next against #1 WBA John Ryder, and he could be correct. It might be a little early for a unification fight between Callum and Saunders. If they let that fight marinate for a little while, it could attract a lot of fan interest.

“If it was millions of pounds, it is what it is. You’ve got Canelo-Golovkin,” said Saunders. “These British dust ups must be made. I’m in a situation where I’ve got a major belt in the division, and I’m willing to fight anyone in the world. One of the biggest names in the division is in the UK. So if that offer isn’t good enough from Frank Warren, Eddie Hearn, send me an offer, and I’ll show you I’m ready to make them fights. In my opinion, it’s worth more. If that’s not enough, send us an offer. Hold the September date, and send us an offer,” said Saunders.

Golovkin would be showing a lot of courage in taking on Saunders for his next fight, but that’s unlikely to happen. GGG just wants the Canelo fight, and if not him, then likely someone easy like Szeremeta or a Brandon Adams type of fighter.