AJ’s loss may be a blessing 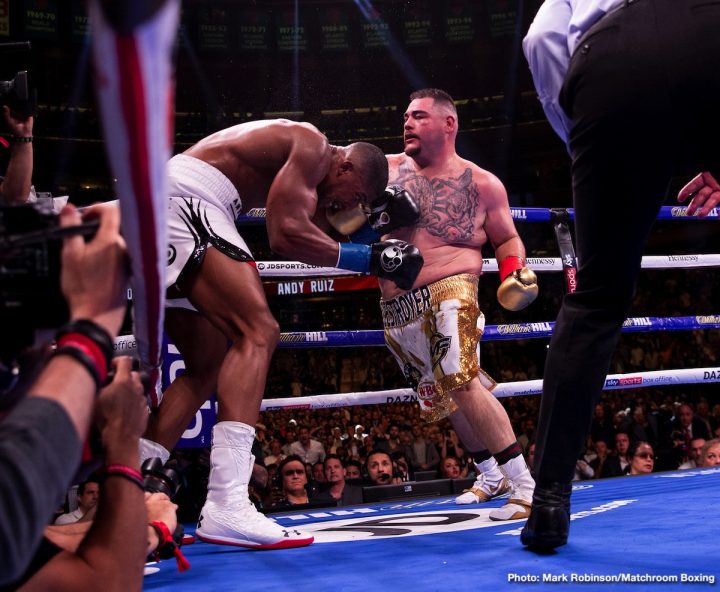 By Gav Duthie: Anthony Joshua has been preparing to lose for a long time. Stay Humble is not just a hashtag for AJ its a way of life. Many couldn’t believe that he took losing so well, no excuses, no tears just acceptance. Many saw AJ as this Adonis character, powerful, strong, quick and unbeatable but he never saw himself this way. He knew there might be a time where he would have to face defeat but the realization that he is one of life’s winners keeps him on his path. He knows that if not for boxing he could be in jail or worse. I really think this loss to Andy Ruiz Jnr could be a blessing and I will try to explain why.

Was this the biggest upset since Douglas and Tyson

Quite simply no it wasn’t. James Buster Douglas was a decent fighter he had just beaten both Trevor Berbick and Oliver McCall before fighting Iron Mike but he was never in the level of Andy Ruiz Jnr. A 105-5 record as an amateur and only one defeat as a pro a disputed decision against the talented Joseph Parker. Ruiz was always going to be dangerous but people were fooled by the physique.

On the night it was actually Joshua’s body that let him down not Ruiz. He has lived up too much to this Adonis image that he is cut from marble. Year on year as a professional he has added more muscle to his appearance. It was almost counter productive against Klitschko and it definitely was against Ruiz Jnr. It can greatly affect your stamina having a body like that. Most power lifters aren’t built for longevity and I feel the balance of training is possibly a bit skewed for AJ right now. He has a chance to rectify this. If he knows why he lost or his team knows he can win this rematch. If he loses, no matter he has already been knocked off the pedestal and he has made more money than most would in 20 lifetimes.

AJ will never have the same pressure again in his career. Even if he goes out there and destroys Andy Ruiz in the first round in the rematch he still hasn’t erased the defeat. No matter what people will always expect Wilder to knock him out and Fury to outbox him. He will always be the underdog now in the big fights and because of his popularity those big fights are still around.

What does he need to do

AJ seems to have the same problems that Wladimir Klitschko had. The stamina, strength and resilience in his legs. Many have compared the loss to that of Lennox Lewis against Oliver McCall and Hasim Rahman. I disagree, Lewis was knocked out by huge single punches. Against McCall Lewis overstretched with a left/right and got hit with a short right. Game over. Rahman maybe wasn’t the most well rounded fighter but he had amazing power in his straight right. Its heavyweight this can happen. It was different with Joshua though. His body gave up on him. He couldn’t get that second wind back. He had no energy, couldn’t ship punches, had little reflexes or even the strength to keep Ruiz off him. For me it was very reminiscent to the losses Wladimir received against Ross Purity and Lamont Brewster. He seemed to have lost all strength in his body, that you could knock him over with a feather. Klitschko changed everything. He stopped taking risks, he gave up on the pressure of having to entertain, put on a show etc. AJ always feels he needs to make statements, he doesn’t he just needs to win. He needs to concentrate on his boxing, his jab, his movement, keeping it long and simple. He needs to be mobile. If he can do this he can beat Andy Ruiz Jnr and can then get back on track.