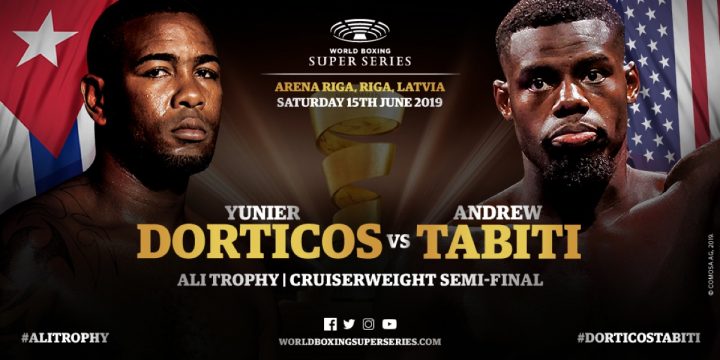 Yunier ‘The KO Doctor’ Dorticos (23-1, 21 KOs) and Andrew ‘Beast’ Tabiti (17-0, 13 KOs) are both oozing confidence ahead of their WBSS Semi-Final at the Arena Riga on Saturday for the vacant IBF Interim World Championship and a place in the Ali Trophy Final.

“I came here to win, I came here to knock out my opponent. That’s what the fans love to see and that is what I am going to give them on Saturday,” said Dorticos who has the ultimate occasion of redeeming himself after last year’s semi-final defeat against Murat Gassiev,

“I am not going to waste this opportunity this time around. It is going to be amazing to get to the final. My objective is to win the Muhammad Ali Trophy and become a unified champion.”

“Dorticos is a knockout artist and me, I am as well, so I think there is going to be some fireworks on Saturday,” said Tabiti. “I came well prepared and I am going to get the ‘W’.

“This is everything I dreamed about since I started boxing to be a world champion. It is crazy. I am taking this guy very serious, but like I said I am here to take the ‘W’. Ali was one of the fighters I grew up watching. So it is a big deal for me to fight for the Ali Trophy.”

“We look forward to a sensational night of boxing in for me one of the most exciting weight classes on the planet,” said Kalle Sauerland, Comosa’s Chief Boxing Officer. “Both guys got through tough quarter-finals and Dorticos’ and Tabiti’s styles are just made for each other. I think on Saturday we are going to get absolute fireworks in the ring. In the biggest light display in boxing, the biggest production in boxing.

“The Ali Trophy, when we set out a couple of years ago with this project, was to travel the world with great events and make no mistake Dorticos-Tabiti is a fight that really, normally would take place in the old meccas of boxing …New York, Vegas, L.A., but this fight is taking place in Latvia, so Viva Las Rigas!

“On Saturday we are turning this place into the pinnacle of the boxing world. I think Muhammad Ali would be very proud, you know his family signed off to be the virtual ambassador of this tournament. It is in the name of Ali, he traveled the world as a fighter. He traveled in the name of boxing and these guys are all doing it. And it’s all for the glory. It’s all to be the best. This is the best against the best.

“Too much of the time the champions in our sport are avoiding each other, the challengers avoid each other. Boxing is about the levels and the World Boxing Super Series is about taking it to another level.”

Tickets for the hotly-anticipated semi-finals in Riga – Mairis Briedis vs Krzysztof Glowacki and Yunier Dorticos vs Andrew Tabiti – are on sale via bilesuserviss.lv