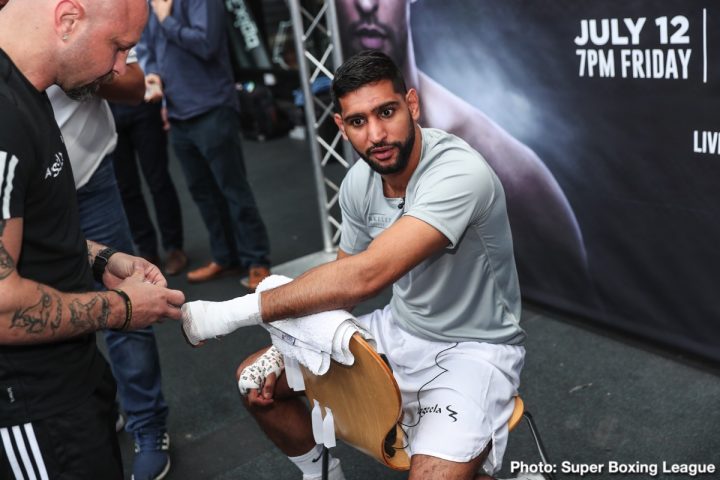 By Tim Royner: Amir Khan and Billy Dib won’t be fighting for the WBC ‘Pearl’ welterweight title on July 12. The WBC has withdraw the ‘Pearl’ belt, which is designed for special occasions, and instead they’ll have their WBC International 147 pound title up for grabs for that fight.

Khan could fight for Pearl belt in future

Goyat (11-3-2, 2 KOs) had never beaten a world level fighter, and he’d recently lost to an opponent making his pro debut last year in Sergio Daniel Moreno Martinez. Goyat getting beaten by a fighter with a 0-0 record is an indication of the kind of mismatch the Khan-Goyat fight would have been.

The World Boxing Council said this about their decision to have Khan vs. Dib fight for their WBC International 147 pound title:

“The World Boxing Council had prepared a special belt to recognize the winner of this fight not only because this is a historical contest, but also as a symbol of peace to recognize the efforts of Amir Khan; representing Great Britain and Pakistan. And Neeraj Goyat; representing India. This is to boost sports and social development in this region.

“Considering all these elements and above all the proven quality of both contenders, the WBC approved Khan vs. Dib for the vacant international welter belt. The pearl belt will be reserved for another special occasion in the future.”

Goyat (11-3-2, 2 KOs) pulled out of the Khan fight this week after suffering injuries in a car accident on Monday. Moving quickly, Khan found 33-year-old former IBF featherweight champion Billy Dib (45-5, 26 KO) to step in as the replacement for Goyat with just three weeks to prepare for the fight.

The replacement of Goyat allows the July 12th card to continue on without being canceled, and in some ways it’s a better fight. Dib is a former world champion, and has boxed a much higher level than Goyat. Khan vs. Goyat was horrendous straight up mismatch involving two fighters that were world’s apart in terms of talent. There’s a lot of money being paid to Khan to take the fight on July 12th. It’s unclear how big Dib’s purse will be for the fight.

With Khan being paid millions for the July 12th fight, Dib should be getting a decent purse. Khan could afford a better opponent than Dib.

Khan’s huge purse would have allowed for him to have gotten a much better opponent than Dib. If Khan sacrificed a small portion of his pure, he might have been able to sign a well known welterweight contender like one of these fighters: Adrien Broner, Jessie Vargas or Josesito Lopez.

The decision by Khan to choose featherweight Billy Dib as his replacement opponent has been met with criticism. Fans don’t understand why Khan selected a fighter that competes four divisions below him at 126. It’s disappointing that Khan is fighting someone so much smaller than him. The fight is similar to the recent Jessie Vargas vs. Humberto Soto bout that took place last April. In that match, Vargas, a junior middleweight, fought 38-year-old former super featherweight Soto, and stopped him in the sixth round. The size and age difference between the two was significant. Khan and Dib are close to the same age, but the difference in weight classes is too much for the fight to be viewed as a fair one.