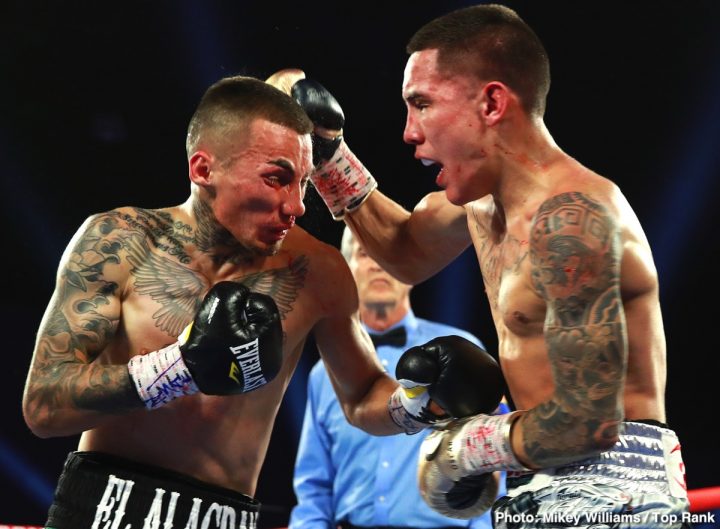 By Jim Dower: Oscar Valdez (26-0, 20 KOs) successfully defended his WBO featherweight title last Saturday night in beating fringe contender Jason Sanchez 14-1, 7 KOs) by a one-sided 12 round unanimous decision on a Top Rank Boxing promoted card on ESPN at the Reno-Sparks Convention Center, in Reno, Nevada. Valdez dropped the 24-year-old Sanchez with a left to the head in the fifth round. From that point on, Valdez toyed with Sanchez, and kept him around by boxing him instead of going for knockout. This is the new Valdez. He doesn’t push for knockouts like he used to.

It looked like Valdez was taking it easy on Sanchez, because he was dealing with a fighter nowhere his same class in terms of talent. Valdez, who is trained by Eddy Reynoso now, he’s trying to emphasize more defense in his fights, because he’d been taking a lot of punishment in his fights against Scott Quigg, Miguel Marriaga and Genesis Servania. Reynoso trains the current two-division world champion Saul Canelo Alvarez, and he’s done a good job with him. Canelo is someone that naturally gifted and smart. He would do well with any trainer.

Valdez may need to move up to 130 soon

Oscar is finding it increasingly difficult to make the featherweight limit of 126 pounds, and he’s noticing that he gets tired later in his fights. For now, Valdez plans on staying at featherweight, but it’s possible that he’ll need to make the move up to 130 soon. Things might be tougher for Valdez at super featherweight though. The fighters hit harder, and there are guys like Gervonta ‘Tank’ Davis that would be a lot of trouble for him due to his power. However, Valdez’s promoters at Top Rank would likely not match him against Gervonta.

“I hope [to fight at featherweight again]. I also have to listen to my body. We’re going to see what’s best,” Valdez said after the fight. “Sometimes I get tired in there, and I’m not sure if it’s because of the weight loss. We’ll talk about [my next move] as a team and will do what is best. I want to fight everybody at 126, 130. Let’s do it.”

The victory for the two-time Olympian Valdez was his sixth defense of his World Boxing Organization 126 pound title. It’s unclear when Top Rank will put Valdez in with some of the better fighters at featherweight. Sanchez was selected from the bottom of the WBO’s rankings, and he was about as competitive with Valdez as his last obscure opponent Carmine Tommasone. Fighters like Gary Russell Jr., Leo Santa Cruz, Eduardo A. Ramirez, Tugstsogt Nyambayar and Josh Warrington would all likely jump at the chance to fight Valdez if given the chance to fight him. Valdez would be the favorite against most of them except for Russell Jr., who is blazing fast,

Bob Arum wants to match Valdez against Carl Frampton next

Valdez’s promoter Bob Arum of Top Rank Boxing wants to match him next against 32-year-old former two division world champion Carl Frampton, who is coming off of a 12 round unanimous decision defeat at the hands of IBF featherweight champion Josh Warrington last December. Frampton (26-2, 15 KOs) is starting to look like a shot fighter. It’s unclear what Valdez stands to gain in fighting Frampton other than a payday. It would be better for Valdez to face one of the still relevant featherweights like Russell Jr. or Santa Cruz. Of course, those are fights that would be difficult to make due to the politics of boxing, but those are better fights.

“We’re going to look for a fight later on in the year between Valdez and Carl Frampton if Frampton is successful in his next fight,” said Arum.

Unbeaten Gabriel Flores Jr. (14-0, 6 KOs) kept his perfect record intact with an impressive eight round unanimous decision victory over the always tough Salvador Briceno (15-4, 9 KOs) in the co-feature bout on the Valdez vs. Sanchez card on ESPN. The scores were 79-73, 79-73 and 78-74. Boxing News 24 scored it for Flores Jr. by a 7 rounds to 1 score.

Overall it was a good performance by the young 19-year-old Flores Jr. He’s not ready to challenge for a world title at 135 against champions like Vasiliy Lomachenko or Richard Commey. However, in three or four years after those fighters age, and likely leave the lightweight division, Flores Jr. will have a good chance of winning one of the world titles in that weight class. The only question is whether Flores Jr. will outgrow the 135 pound division. He’s still young and growing.

At 5’9″, Flores Jr. might end up at welterweight in the not too distant future. Right now, Flores Jr. is still young, and can take the weight off to get down to 135, but he’s not likely going to be able to do that when he reaches his mid-20s. He’ll still filling out, and will have to move up to 140, 147, and 154. Flores Jr. will need more punching power to thrive in those weight classes.

“I want to fight in the next two, three months,” said Flores. “If they want me to fight next month, we can talk about it,” Flores said. “I am only 19, and I am only getting better. I’m staying busy and fighting better opponents.”

It would be nice to see Flores Jr. matched against some of these lightweights: Lee Selby, Denys Berinchyk, Masayoshi Nakatani, Antonio Moran, Felix Verdejo, Yvan Mendy, Javier Fortuna or Roman Andreev. Those are all beatable fighters at 135.

Seals landed a big right hand that knocked Brooker out in the second round. The official time of the stoppage was at 2:00 of round 2.

Light welterweight Wilfred Mariano (1-0, 1 KO) defeated William Flenoy (0-1) by a fourth round knockout. Flenoy suffered a shoulder injury in the fourth round that led to him having the fight stoppage. In the third round, Flenoy was knocked down by Mariano. The official time of the stoppage was at 0:45 of round four.