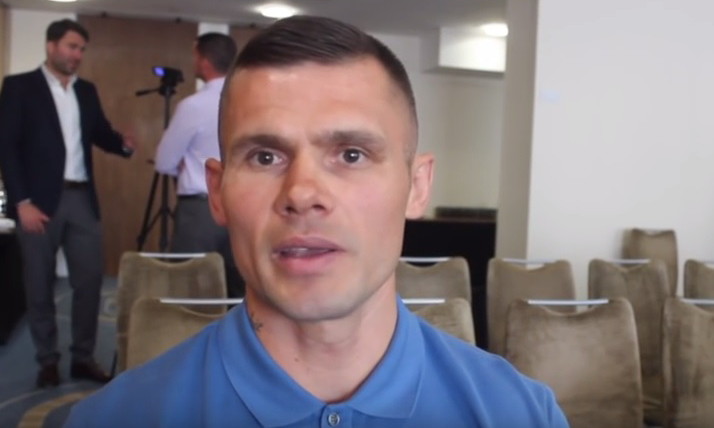 Four-time world title challenger Martin Murray is determined to blast the solid Kim Poulsen aside at #MTKFightNight in Liverpool on July 12.

Poulsen, who was last seen taking WBA Oceania super-middleweight champion Jayde Mitchell the full 10 rounds in December, is very much a ‘live’ opponent – but Murray is plotting a brutal welcome.

Murray said: “I believe I’m on a different level to him but for a comeback fight, it’s not going to be any kind of walkover. He’s coming to win.

“With my skills as a boxer plus my superior physical attributes, I still plan on getting him out of there and look good doing it.

“This is a massive night of boxing in Liverpool. I didn’t dream of coming back on something like this. It’s an absolutely stacked bill with some world-class Scousers on it as well as one of Manchester’s finest in Terry Flanagan.

“The Olympia is such a great venue. I’ve fought there before but this card could easily have been filling the Echo Arena.

“The Scouse fight fans are the best in the world and I can’t wait to put on a good show for them.”

Darragh Foley is determined to seize the WBC ranking title

Darragh Foley is eager to silence Belfast fans when he takes on home fighter Tyrone McKenna for the WBC International title at Ulster Hall.

The rival super-lightweights collide on an #MTKFightNight on June 21 – live on ESPN+ in association with Top Rank and also available on iFL TV – with Australia-based Foley fighting on the island on which he was raised for the first time as a professional.

Despite McKenna’s warning of a hot reception awaiting him in the scheduled 10-rounder, Foley isn’t remotely concerned.

‘Super’ (17-3-1, 9 KOs) said: “I know he’s got a good following but it doesn’t matter. Noise is just noise and whether they’re singing for him or singing for me, I’ll feed off them.

“I’ll bring a good crowd of my own so it’ll be a tasty environment in there. This is the most exciting all-Irish title fight on paper for a long, long time and I’m up for creating history.

“I’ll walk out to the middle of the ring and if he does the same, so be it. I think we could do something incredible in there and I’m just so excited.

“This fight means a lot to me. I’ve never fought on Irish soil as a professional so I’m really looking forward to it. I’ll prove to everyone what I’m about.

Tyrone McKenna sees no way for Darragh Foley can beat him to the WBC International title when the pair collide on Belfast’s #MTKFightNight on June 21.

‘The Mighty Celt’ (18-1-1, 6 KOs) collides with ‘Super’ Foley (17-3-1, 9 KOs) in the iconic surroundings of Ulster next Friday with the super-lightweight ranking title up for grabs.

As they prepare to do battle over a scheduled 10 rounds live on ESPN+ in association with Top Rank and also on iFL TV, McKenna is brimming with confidence.

McKenna said: “I can box, I can go to war. I can do a bit of both – I don’t mind. Everybody knows I love to fight and get dragged into the trenches. I’m there for the trenches.

“I’ve been in the gym with Danny Vaughan practicing getting back to my boxing. We’ve been working on moving and defence and that’s what I’ll try and do on the night.

“Who knows what’ll happen on the night because the crowd always plays into things so I might end up going to war after all!

“Even if I do go for a war, I’m still going to win. I believe I’m better than him in every single department and regardless of what happens tactically, I’ll get my hands on that belt.”

Kieran Smith is well aware that he has a tough task ahead of him against Ivan Montero – but plans on producing a performance that makes everyone stand up and take notice when they meet at #MTKFightNight on June 22.

Unbeaten Smith (14-0, 7 KOs) defends his WBC International Silver super-welterweight against Montero on a packed bill at the Emirates Arena in Glasgow, live on ESPN+ in association with Top Rank and also live on iFL TV.

A victory for Smith can lead to big things later this year, and ‘Chopper’ is ready to take full advantage of the opportunity to showcase his skills on a huge stage.

Smith said: “Montero has only been beaten by guys that have pushed onto the top level and been world title challengers. I feel a win over him on June 22 will move me forward as it will be a big name on my record.

“The fight is on ESPN+ in America too so it’s a massive platform to get my name out there and gives me an opportunity that I’ve not had before.

“I think a win in this fight fires me right up there and I’ll be looking for a massive fight after this, but first and foremost I have this fight with Montero and I’m fully focused on that.”