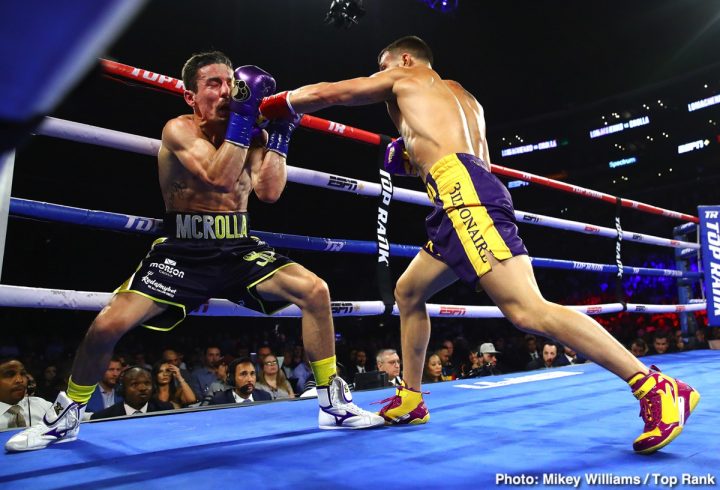 By Chris Williams: The Vasiliy Lomachenko vs. Luke Campbell purse bid that was scheduled for today has been postponed until next Wednesday, according to Lance Pugmire. However, WBA/WBO lightweight champion Lomachenko’s promoter Bob Arum of Top Rank Boxing is “confident” he’ll be able to get the deal done for August 31 at the O2 Arena in London, England.

The UK is where Arum wants the Lomachenko-Campbell fight to take place, because he hopes to expand Loma’s fan base over there to turn the two-time Olympic gold medalist into a superstar there. Despite being talented, Lomachenko (13-1, 10 KOs) has yet to become a crossover star in the United States, and it’s unclear whether he ever will given the way he’s been matched.

If the British fans can adopt Lomachenko as one of their own, he might wind up fighting in stadiums one day the way that former IBF/WBA/WBO heavyweight champion Anthony Joshua has done. Who knows? However, Lomachenko will need to transform himself into a knockout puncher for that to have a chance of happening, because he doesn’t load up enough on his shots, and he’s too focused on his defense.

By having the Lomachenko-Campbell fight in he UK, it could result in fewer viewers watching it on the ESPN+ app. It’s not a great fight anyway in terms of attracting new subscribers for ESPN+. Campbell, 31, isn’t well known in the U.S. If the fight takes place in the UK, it’ll be shown in the U.S earlier in the day on Saturday, which will be bad news for ESPN, because viewer U.S fans will bother watching it. Fans in the U.S typically watch boxing events in the evening on Friday and Saturday nights.

Lomachenko fighting on DAZN is a non-starter

If Campbell’s promoter Eddie Hearn of Boxing Boxing wins the purse bid next Wednesday, it means the fight will be shown on DAZN. Top Rank likely won’t agree to that, as Lomachenko isn’t a big enough name in the U.S. to split the audience. Far fewer boxing fans would be willing to subscribe to ESPN+ to watch the Lomachenko-Campbell fight. They wouldn’t need to, because it would be shown on DAZN. It would be great for Hearn to have Lomachenko fight Campbell on DAZN, because it would increase the subscribers to that platform, but it wouldn’t do anything for ESPN.

The U.S hardcore boxing fans know Campbell from his loss to Jorge Linares in 2017. He’s beaten anyone talented during his career, and he’s lost twice already. In terms of talent, Campbell is a little better than Anthony Crolla, the last opponent for Lomachenko. Campbell’s best wins as a pro have come against these fighters: Yvan Mendy, Darleys Perez, Derry Mathews, Argenis Mendez, Gary Sykes, Tommy Coyle and Daniel Eduardo Brizuela. Apart from his fight with Linares, Campbell has been kept under wraps by his promoter Eddie Hearn. He’s been reluctant to match Campbell tough up until now, and he’s 31.

Here’s what Lance Pugmire had to say about the postponement of the Lomachenko vs. Campbell purse bid on his social media site:

“BREAKING: The scheduled purse bid for the Vasyl Lomachenko vs. Luke Campbell WBC Boxing lightweight bout has been postponed until Wednesday…and Lomachenko promoter Bob Arum is confident a deal will get done for August 31 meeting in London.I don’t know that Arum should be depicted as adamant but he believes as of now that’s where the fight is going, the home of Campbell and a place Loma has been well received not a bad spot.”

There’s not a lot of interest from the American casual boxing fans in watching Loma defeat another over-matched opponent in Campbell. The fans are ready for Lomachenko to start fighting guys like Teofimo Lopez, Miguel Berchelt and Gervonta Davis. Lomachenko is 31 now, and he’s not going to stay on top for too much longer before he starts fading.

In the recent past, Lomachenko has defeated Anthony Crolla, Jose Pedraza, Jorge Linares, Miguel Marriaga, Jason Sosa, Guillermo Rigondeaux and Nicholas Walters. The fans want to see Lomachenko fight Teofimo Lopez, and then go after guys at 140 and 147, which he’s not willing to do. Top Rank is saving the Lomachenko vs. Teofimo fight until early 2020. In other words, they’re letting the fight marinate for a while before they finally put those two in with each other.

It’s a mistake obviously, because no one cares about seeing Lomachenko defeat Luke Campbell, and they don’t care about him unifying the lightweight division either. After Lomachenko beats Campbell, Top Rank will likely have him fight IBF lightweight champion Richard Commey to win the last title. Lomachenko feels it’s important that he unify the 135 pound division. He obviously he’ll become a bigger star that way, but that probably won’t be the case. The fans don’t care about fighters unifying weight classes. They care more about seeing the best possible fights made. Lomachenko is going about winning over the U.S boxing fans the wrong way, and it’s too bad Top Rank isn’t steering him in the right path.

Part of the problem that limited Loma’s popularity is the type of opposition that he’s been fighting. Although Lomachenko has been winning nonstop since his loss to Orlando Salido in 2014, he’s not competing against popular enough fighters to take his career to the next level. Moreover, Lomachenko does a lot of showboating, and he throws too many weak punches thrown rapidly. Loma doesn’t sit down on his shots enough. In his last fight against Crolla, Lomachenko finally showed some power in battering the over-matched British fighter around the ring until stopping him in the fourth round last April. That was by far the best performance of Lomachenko’s six year pro career. It’s too bad that it took Loma this long to finally fight in the way that American boxing fans like to see from their fighters.