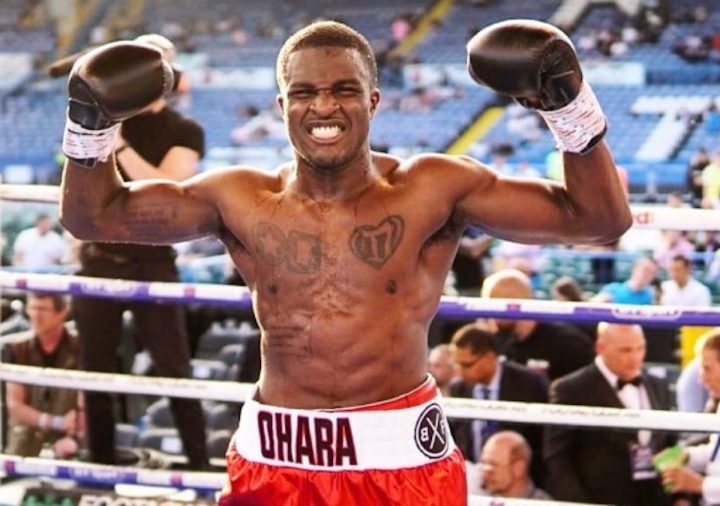 Ohara Davies has emphatically dismissed suggestions former world champion Miguel Vazquez could know too much for him on Friday night.

London’s ‘Two Tanks’ welcomes the famous Mexican to the #MTKFightNight at York Hall – live on ESPN+ in association with Top Rank and on iFL TV – and has warned his visitor won’t survive his undoubted power for more than three rounds.

After Vazquez (41-7, 15 KOs) issued a bullish bulletin ahead of a truly intriguing 10-round showdown, Davies has stressed his belief he’s capable of ending the fight at any time.

“In the past – in particular in my last fight, my mindset was to be smart and sharp and win on points. Now my mindset is: ‘Just hit. Just once.’

“I don’t believe he’s capable of shutting me up. We’ve got to wait until fight night but I’m in the best shape I’ve ever been in.”

British featherweight champion Ryan Walsh will make the sixth defense of his title in a 12-round showdown against the unbeaten Lewis Paulin on the latest edition of #MTKFightNight Friday, June 28 at York Hall in London.

Walsh (23-2-2, 11 KOs) has held the British featherweight title since 2015, when he edged Samir Mouneimne by split decision to win the vacant belt. He is unbeaten in three bouts — all defenses of the British title — since losing a split decision in October 2016 to Dennis Ceylan for the vacant European featherweight title. Paulin (12-0, 3 KOs), from Edinburgh, Scotland, is taking a massive step up in class, as he has only two wins against foes with winning records. He is two fights removed from winning the Scottish featherweight title via decision against then-unbeaten Stephen Tiffney.

Reigning champion Walsh is proud to once again be involved in a British title fight, but has big ambitions for the future following his clash with Paulin.

Walsh said: “I’m one of the longest reigning British champions and I don’t think this will be done again in my lifetime. It’s a unique position and I’m proud to have this title. I will never vacate it, and I’d have to be beaten for me to ever lose it.

“This will be my sixth time defending my title, and hopefully a win here pushes me in the right direction towards a bigger fight. I’d love the European title as I feel it’s a shot I rightfully deserve, or it could even be a final eliminator for a world title or a world title itself next.

“I’m willing to fight anyone at a drop of a hat. I’ve got Lewis Paulin in front of me and my eyes are firmly on him, but who knows what a victory can lead to. There are three featherweight world champions based in America, so it’s great my fight is broadcast over there.

“It means I can sell myself to the American audience so it’s a great incentive. Job one is defeat Lewis Paulin, and job two is show the American fans that there is a willing fighter who wants to challenge their champions.”

Davies (18-2, 14 KOs) turned pro in 2014 following a brief amateur career and became one of Great Britain’s leading prospects following a 15-0 start to his pro career. He stumbled in a bid for the Commonwealth super lightweight title against Josh Taylor, suffering a pair of knockdowns en route to a seventh-round stoppage loss. Davies rebounded with a trio of wins before dropping a competitive decision to Jack Catterall last October.

Vazquez (41-7, 15 KOs), from Guadalajara, Jalisco, Mexico, famously lost a split decision to Canelo Alvarez in his professional debut in 2006. In August 2010, he won the vacant IBF world lightweight title with a unanimous decision over Ji Hoon Kim. He would go on to defend the title six times before dropping a razor-thin split decision to Mickey Bey in September 2014. He is 7-3 since losing the world title, most recently upsetting Ghislain Maduma by split decision in Maduma’s adopted hometown of Montreal.

Friday’s stream will also include:

In a 10-round showdown featuring a pair of unbeaten super lightweights, Daniel “Danny Darko” Egbunike (4-0, 3 KOs) will take on Martin McDonagh (5-0, 0 KOs).


« Eric Gomez: Canelo will fight GGG when he wants to

Adrien Broner vs. Lee Selby in negotiations for fall »