Rey Vargas vs. Tomoki Kameda on July 13 in Carson, California 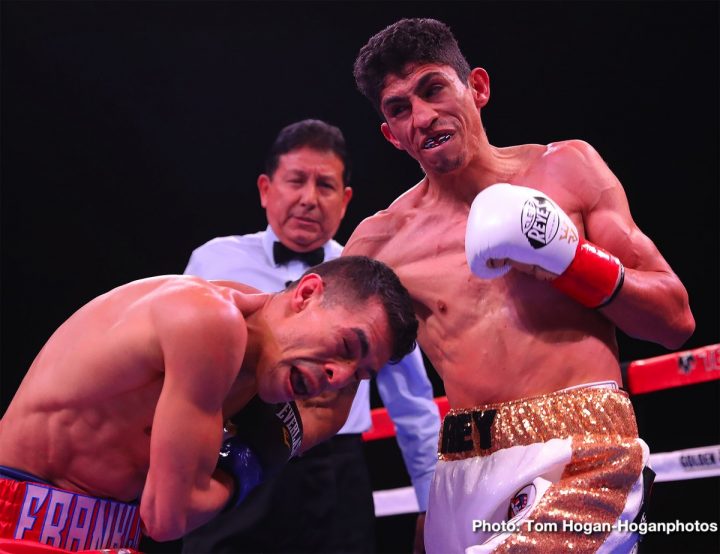 “Golden Boy is no stranger to big events with stacked undercards, and much less when it comes to having them at the Dignity Health Sports Park,” said Oscar De La Hoya, Chairman and CEO of Golden Boy. “Not only is this place the home of the LA Galaxy, it has also become a battlefield for some of the most exciting wars this sport has ever seen. July 13 will not disappoint as the best 122-pounder in the world in Rey Vargas defends his world title against an explosive challenger. Most importantly, however, this stacked card will also demonstrate what we have been doing at the Golden Boy for many years: producing stars and making the best fights possible.”

Vargas is a 28-year-old world champion who brings a considerable height and reach advantage to every fight, which he has used to defeat all of his previous opponents. In February 2017, Vargas traveled to the United Kingdom to defeat Gavin McDonnell for the vacant WBC Super Bantamweight Title. For that fight, Vargas enlisted the help of Hall of Fame trainer Ignacio “Nacho” Beristain, who has been training him ever since. Vargas then defended the title against Ronny Rios, Oscar “El Jaguar” Negrete, Azat “Crazy A” Hovhannyan and Franklin Manzanilla. The native of Mexico City, Mexico will look to make the fifth defense of his title in his first main event fight in the United States.

“This is going to be a hard and complicated fight,” said Rey Vargas. “Kameda is a difficult opponent who has been a world champion. Above all, however, he has a thorn in his side that he’ll want to take out because I beat him in the amateurs several years ago. This is an interesting fight. He is a quick fighter and he’ll look to take advantage of that, but thanks to God and my corner we are already working to counteract the strategy of this Japanese fighter. God willing, we will walk away with our hand in victory.”

Kameda is a 27-year-old native of Tokyo, Japan who traveled to Mexico when he was only 15 years old to learn from and compete with its fighters, earning the nickname “Mexicanito” in the process. Since then, Kameda has developed into a complete fighter utilizing styles from both countries. In 2013, Kameda became a world champion by defeating Paulus Ambunda for the WBO Bantamweight World Title, defending it three times. He also challenged for a world title on two occasions by facing Jamie McDonnell for the WBA Bantamweight World Championship. Kameda then moved up to 122 pounds where he plans to become a two-division world champion.

“This is going to be a great battle,” said Tomoki Kameda. “I know Rey Vargas very well. We fought in the amateurs during my time in Mexico. I look forward to getting my revenge against him and becoming a two-division world champion. I know Vargas is a tall fighter with long arms, but the Mexican style that I possess will give him a lot of trouble and make for a great fight for the fans!”

“This is a great fight where the two best super bantamweights in the world will meet,” said Oswaldo Kuchle, President of Promociones del Pueblo. “Rey Vargas will prove that he is invincible, and that’s why he has the belt with the highest ranking-the WBC belt.”

“A former world champion who’s fought on the big stage in Japan, Mexico and the U.S., Tomoki Kameda is more than ready for this opportunity to become a champion again on July 13,” said Tom Brown, President of TGB Promotions. “At just 27-years-old, Kameda is still in his prime after already accomplishing a tremendous amount as a pro. He’s going to bring a challenge that Rey Vargas has never seen before and deliver a memorable night for his fans all over the world.”

In the co-main event, Diego De La Hoya (21-0, 13 KOs) of Mexicali, Mexico will take on hometown favorite Ronny Rios (30-3, 14 KOs) of Santa Ana, Calif. in a 12-round fight for the vacant WBA Gold Super Bantamweight Title.

“I’m excited for this great opportunity to showcase my skills at the Dignity Health Sports Park,” said Diego De La Hoya. “This is another step closer to a world title challenge, and I promise to give my fans a night to remember. Ronny Rios is a tough fighter, but these types of challenges motivate me to perform at my best. I won’t be denied a victory come July 13!”

Joet Gonzalez (22-0, 10 KOs) of Glendora, Calif. will fight for the vacant WBO Global Featherweight Title in a 10-round fight against Manuel “Tino” Avila (23-1-1, 8 KOs) of Fairfield, Calif. This fight will feature two high-level Golden Boy contenders who are centimeters away from a world title shot.

Mexican rising star Eduardo “Rocky” Hernandez(28-0, 25 KOs) will return in a 10-round super featherweight fight. This will be Rocky’s second fight after signing a co-promotional deal between Promociones del Pueblo and Golden Boy.

Adrian Benton (1-0) of Cincinnati, Ohio will participate in a four-round super lightweight fight.

The opponents for this undercard will be announced shortly.

Vargas vs. Kameda is a 12-round fight for the WBC Super Bantamweight World Title presented by Golden Boy in association with Promociones del Pueblo and TGB Promotions. The event is sponsored by Tecate, “THE OFFICIAL BEER OF BOXING,” and Hennessy “Never Stop. Never Settle.” The event will take place Saturday, July 13 at Dignity Health Sports Park and will be streamed live on DAZN.

« Arum: ‘Pacquiao has a chance if Thurman is same guy as last fight’

Amir Khan vs. Neeraj Goyat to have special guest on July 12 »