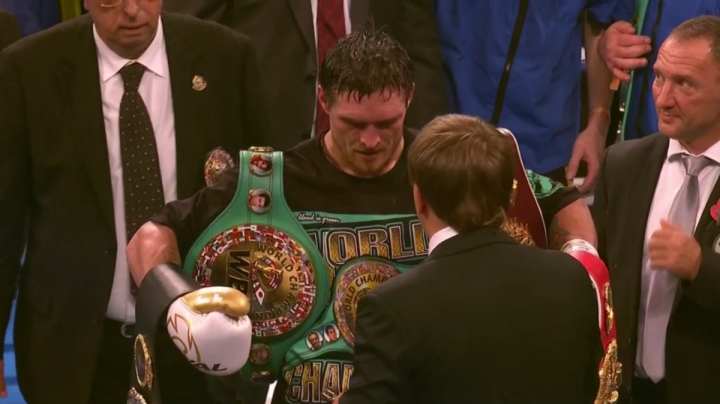 A week out from the Season 2 Cruiserweight Semi-Finals, Season 1 champ Oleksandr Usyk can’t pick a clear favorite in Riga and hopes for a WBSS tournament in his new division.

Usyk came, fought and took it all in Season 1 of the World Boxing Super Series. He became the first winner of the Ali Trophy after outpointing Murat Gassiev in the Final on July 21, the first undisputed world cruiserweight champion, the consensus 2018 Fighter of the year. All achieved through competing in best vs best format of the WBSS.

Usyk followed with a November defense of all four belts by knocking out former titlist Tony Bellew in the eighth round and then decided to move up to heavyweight and go after the titles.

“If the WBSS would decide to make an Ali Trophy tournament in the heavyweight division it would be really cool,” said Usyk. “It would be very interesting, but if I don’t know if it’s possible.”

The Ukrainian pound-for-pound star looks back on his part of the World Boxing Super Series with pride.

“Almost one year has already passed since the final of the first Ali Trophy …,” said Usyk.

“I remember when I heard that the WBSS would take place and cruiserweight was one of the divisions, the trophy was named after ‘The Greatest’ and four belts were at stake if all the champions participated. My first thought was: It’s a sign!

“My thinking was; I have to participate and God will help me win. I was very happy that I did it! I don’t think the tournament will ever be eclipsed.”

Two of Usyk’s now former belts, the WBC and WBO, are at stake in Riga on Saturday, June 15 when Mairis Briedis faces Krzysztof Glowacki in the semi-final – two fighters whose sole defeat on their record lists comes from Usyk.

Yunier Dorticos and Andrew Tabiti are the other two battling in Latvia’s capital for a place in the final and division domination.

“To be honest, I have no idea who will win the cruiserweight tournament this year. It’s the ‘Big Four’ competing for the final, so let’s wait … I prefer not to make a prediction,” said Usyk.

“I follow and watch the WBSS and support all guys there because I know how tough it is to be involved. But I have no clear favorites in the three divisions. One thing is sure, the winners have raised their levels and can look forward to good fights and purses in the future.”

Tickets for the hotly-anticipated semi-final in Riga – Mairis Briedis vs Krzysztof Glowacki and Yunier Dorticos vs Andrew Tabiti – are on sale via bilesuserviss.lv