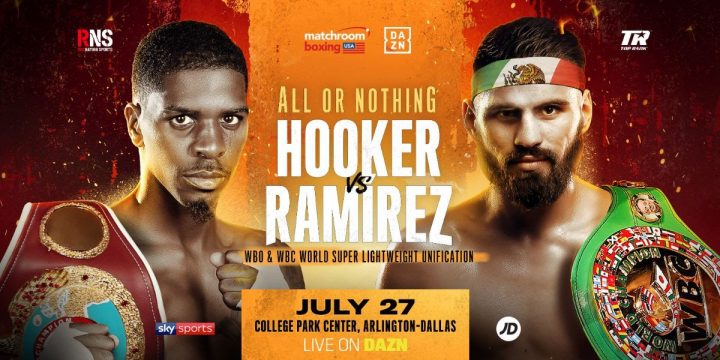 Maurice Hooker says the pressure of fighting at home in a career defining fight will bring the best out of him when he meets WBC World Super-Lightweight ruler Jose Ramirez in unification clash on Saturday July 27 at the College Park Center in Arlington, Texas, live on DAZN in the US and on Sky Sports in the UK.

The 29-year-old Hooker (26-0-3 17 KOs) fights at home after being on the road for a while. Hooker has put together some fine wins recently in defeating Mikkel LesPierre, Terry Flanagan and Alex Saucedo. It’ll be interesting to see how well Hooker does now that he’s fighting in front of his home fans in Texas.

Hooker is looking better than ever at this point in his career, and showing no signs of vulnerability. This will be a harder fight for Hooker than the ones he’s had recently. Ramirez is more of a pressure fighter than the guys that Hooker has been dealing with lately. Hooker is an excellent fighter, but he hasn’t been tested against the lions in the 140 pound division yet. Ramirez is one of the best fighters at light welterweight. The other talented contenders and champions like Josh Taylor and Regis Prograis are currently busy competing in the World Boxing Super Series 140-lb tournament.

Ramirez is coming off of a close victory over Jose Zepeda last February in a fight that many boxing fans thought he lost. It wasn’t Ramirez at his best or even close to that. He spent too much time loading up on shots, which made it easy for the highly skilled Zepeda to pick him off expertly. The fight looked more like a draw or a victory for Zepeda than it did as win for Ramirez. However Ramirez was fighting in his hometown in Fresno, California, and that might explain the favorable scoring. Ramirez won’t be fighting at home against Hooker, however, so he’ll need to raise his game considerably if he doesn’t want to suffer his first loss of his career.

“This fight will define my career,” said Hooker. “I will either be the star at 140lbs or I’ll have to start over again and try to build my name back up. I’m pumped up for this fight. I can fight at home and hopefully win some new fans at home as they can see me fight in person. The fight could have happened in New York or Las Vegas, it doesn’t matter, but I’m pumped for the first time that people can see me fight at home as a World champion.

“People have been hitting me up for tickets and getting excited about it, but I’m focused, I’m back in San Diego and working hard in camp. Everyone is going to be there and that’s more motivation for me. There’s pressure on me to win this fight for the fans as they have always given me great support, so I have to win it for them.”

Former cruiserweight champion Murat Gassiev fights Joey Dawejko in the co-feature bout. This will be at heavyweight. Gassiev, 25, signed with Matchroom Boxing USA, and he wants to capture world titles in the heavyweight division after recently holding down the IBF/WBA belts at cruiserweight. Gassiev has been out of the ring for a year since his defeat at the hands of Oleksandr Usyk last year in the World Boxing Super Series final in Russia. We’ll have to see how the inactivity impacts Gassiev’s game if at all.

Tickets start at just $25 and are on sale NOW from www.utatickets.com