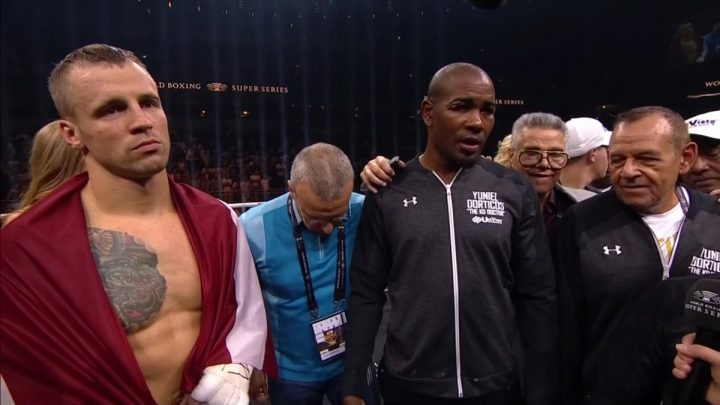 Briedis, 34, knocked Glowacki down in the third round with two hard right hands. Glowacki, 32, got back to his feet, but the referee Robert Byrd stopped the contest. The official time of the stoppage was at 0:27 of round three.

Referee lost control of the fight

The fight was out of control in round two after Glowacki hit Briedis with a punch to the back of the head late in round two. Briedis immediately retaliated by hitting Glowacki with an elbow to the chin, which sent the Polish fighter face down on the canvas.

For a moment there it looked like Glowacki was going to stay down. After Glowacki climbed up off the canvas, referee Robert Byrd penalized Briedis one point for the foul. Byrd ignored the rabbit punch that Glowacki had hit Briedis with initially. After the fight resumed, an angry looking Briedis attacked Glowacki and dropped him with a pair of right hands.

Glowacki got back to his feet and was given a standing eight count by referee Robert Byrd. In the meantime, the bell sounded to end the round, but the referee didn’t hear it. He let the fight continue, and Briedis immediately knocked Glowacki down with some big shots. The screaming from the crowd made it impossible for the referee to hear.

“I heard the bell, but the referee didn’t hear the bell,” said Briedis after the fight. “Dorticos is big boxer with a powerful puncher. In this tournament is the best of the boxers.”

After the fight, Briedis appeared to feel a little sorry for having elbowed Glowacki in the second round. Briedis said he did that because the referee hadn’t done anything about the punch that Glowacki had hit him with to the back of the head. It was a clear foul by Glowacki that should have led to either a point deduction or a stern warning from the referee Byrd, but he let it go without doing anything.

Briedis wasn’t going to wait around to get hit with more rabbit shots, so he took matters into his own hands by tagging Glowacki with an elbow to the chin. Glowacki looked like he wasn’t badly hurt, but was rather was milking it to get a point deduction. Whatever the case, that’s what ended up happening. The referee took a point away from Briedis for the foul, and things went out of control from that point.

All in all, it was a crazy fight. The referee Byrd had an off night in failing to take charge of the situation in the second round.

Dorticos and Briedis will face each other in WBSS final

Briedis will now meet up with newly crowned IBF cruiserweight champion Yunier Dorticos in the final of the World Boxing Super Series in the fall. Dorticos and Briedis briefly spoke after the fight when the Cuban fighter was allowed into the ring for a face off. It’ll be a unification fight between the two champions. Briedis will come into the contest with his WBO title that he won tonight against Glowacki. Earlier tonight, Dorticos stopped Andrew Tabiti in the 10th round in the semifinal of the WBSS tournament in the co-feature bout.