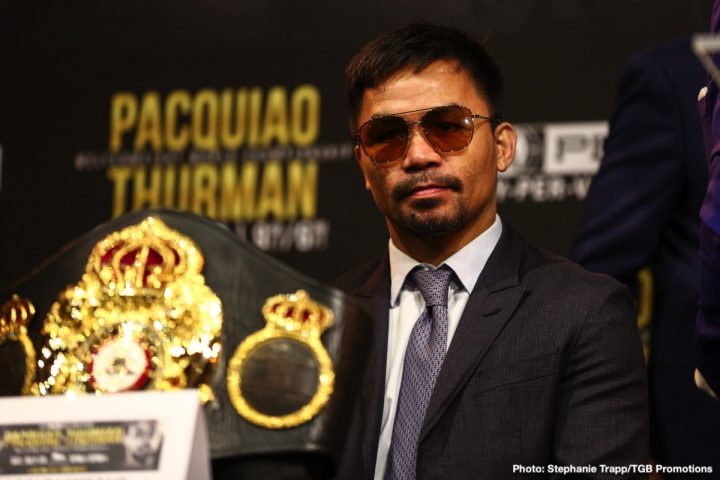 By Charles Brun: Amir Khan says he has an agreement from WBA ‘regular’ welterweight champion Manny Pacquiao for the two of them to face each other on November 9 of this year in Saudi Arabia, according to Gareth A Davies of UK Yahoo Sports.

For the Pacquiao-Khan fight to come to fruition, Khan will need to win his July 12th contest against little known journeyman Neeraj Goyat, and Pacquiao must defeat WBA Super World welterweight champion Keith ‘One Time’ Thurman on July 20 in Las Vegas, Nevada. It’s not looking good for Pacquiao. Thurman has got a lot of talent going for him, and he might be too young for the Filipino star to deal with.

Khan and Pacquiao previously had verbal agreement to fight in 2017

This isn’t the first time that Khan and Pacquiao had a verbal agreement to face each other. In 2017, they had a verbal agreement to fight, but the match never happened. Pacquiao’s promoters at the time, Top Rank, chose to pit him against one of their house fighters in Jeff Horn, and he promptly lost that fight. Granted, it was a controversial decision loss for Pacquiao, but he didn’t look good regardless. Horn used his size and superior conditioning to get the better of Pacquiao.

For his part, Khan was on the shelf for two years after a brutal sixth round knockout loss to Saul Canelo Alvarez in 2016. Khan didn’t resurface until 2018, when he defeated low level fighters Phil Lo Greco and Samuel Vargas in back to back contests.

Khan talks about his potential future fight with Pacquiao

“It looks like it will finally happen,” said Khan to UK Yahoo Sports about a fight between him and Pacquiao. “Hopefully, Manny beats up Keith Thurman the week after my fight. Then we’ll see what happens. End of this year, early next year, I want to make a big name world title challenge and there’s a strong possibility it could be here in Saudi Arabia against Pacquiao,” said the excitable Khan.

It sounds like a pipe dream on Khan’s part in talking up a fight with Pacquiao. While it’s certainly possible for Pacquiao to cherry pick a fight against Khan, it wouldn’t be the best match for the former eight division world champion to take. Presuming that Pacquiao defeats Thurman in their fight on July 20 on Fox Sports Pay-Per-View, the Filipino star would have better options for big money fights against other guys in the welterweight division.

Pacquiao would likely make more money fighting the winner of the Errol Spence Jr. vs. Shawn Porter unification match or facing WBO 147-pound champion Terence Crawford. Those three fighters are all world champions at 147. In contrast, Khan is just a scrapper that is a mere shadow of what he once was 3,000 yesterdays ago.

Khan is viewed by many boxing fans as a faded guy that is looking to put together fights against the best welterweights, but without the ability to compete with them. Pacquiao would stand to gain nothing in fighting Khan at this point in his career. It would make Pacquiao look like he’s ducking the best in order to face an over-the-hill guy in Khan. It would be a bad look on Pacquiao’s part to take a fight with Khan at this point. Pacquiao vs. Khan would be considered a business fight, and not one that has any real bearing in the welterweight division.

Next month, Khan (33-5, 20 KOs) will be facing Neeraj Goyat (11-3-2, 2 KOs) in a 12 round fight on July 12 at the King Abdullah Sports City, in Jeddah, Saudi Arabia. This match-up is considered a farce. In other words, it’s a showcase match-up for Khan in being put in with a guy that isn’t ranked in the top 15 at the world level, and was recently beaten by a fighter making his pro debut in Sergio Daniel Moreno Martinez last year in June 2018.

Pacquiao will be criticized massively if he faces Khan

Manny was given a free pass by boxing fans for his recent fight against a badly past his prime Adrien ‘The Problem’ Broner last January, because it was still decent opponent, even though it was a clear cherry pick. Fighting a shot fighter like Khan would be taking it to another level for Pacquiao in facing a guy that doesn’t deserve a title shot, and who is obviously just hustling to put together matches against notable world champions.

It would be seen differently if Khan actually was earning his title shots by beating quality opposition, but he’s not doing that. For Khan to get his crack at facing WBO welterweight champion Crawford last April, he beat Phil Lo Greco and Samuel Vargas. Those are not exactly world beaters. Assuming that Khan beats Goyat, it would look embarrassingly bad on Pacquiao’s part if he were to give Amir a title shot off the back of that win.

Khan was recently stopped in the sixth round by Crawford on April 20th after his trainer pulled him out of the fight when he was hit with a lot blow. Fighting Goyat isn’t a big enough name for Khan to redeem himself from his quit job against Crawford, is it?

Pacquiao-Khan would be a big fight says Khan

“I want to get back in the mix. That’s why I took this fight so soon after Crawford,” said Khan. “I’m only interested in big fights and Pacquiao would definitely be a big fight.”

If Khan was only interested in big fights, why is he fighting Neeraj Goyat? Pacquiao would do well not to go in the direction of a fight with Khan. At 40, Pacquiao doesn’t have much time left in his career, and he can’t afford to waste it fighting guys that won’t sell.

There were a lot of unhappy U.S boxing fans after they paid to watch the Crawford vs. Khan fight on ESPN pay-per-view last April. A lot of fans rightfully upset with the lack of competitiveness in the Crawford-Khan fight, and they were furious at seeing Khan bowing out after being hit with a low blow in the sixth.

Years ago, Khan and Pacquiao shared the same trainer in Freddie Roach, and they sparred together. The sparring sessions planted an idea in Khan’s head that the two should fight each other. Unfortunately, that never happened, and it’s easy to see why. Khan kept losing when he stepped up against better opposition in Danny Garcia, Lamont Peterson and Saul Canelo Alvarez. There was little to gain for Pacquiao in fighting an opponent that was getting repeatedly knocked out by the likes of Canelo, Garcia and Briedis Prescott.