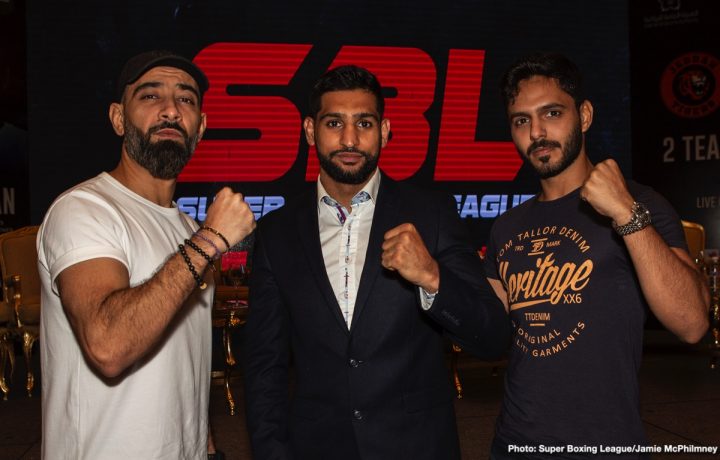 By Charles Brun: Amir Khan is now in need of a replacement opponent for his July 12 card in Saudi Arabia due to his scheduled foe for that date Neeraj Goyat suffering injuries on Wednesday from an automobile accident.

Since few boxing fans had ever heard of the little known 28-year-old Goyat (11-3-2, 2 KOs), it’s not a big issue. The only question is whether this impacts the money Khan will get for the fight. That’ll be up to the organizers. If they absolutely wanted to see Khan fight Goyat for some reason, then it could be a blow for Khan. But as far as the boxing public goes, there was no demand for Khan fighting Goyat.

This was Khan’s idea, not the fans, for him to fight Goyat instead of a quality top tier contender.

“We are very sad to inform that our star Indian boxer Neeraj Goyat who was preparing for his mega-fight against Amir Khan met with a car accident last night that has caused him severe injuries on his head, face and left arm,” promoter Bill Dosanjh told the Indian Express. “He is currently in hospital and we wish him a speedy recovery. We are in the process of looking for Neeraj’s replacement.”

Kell Brook would be obvious replacement opponent for Khan

Depending on what level of opposition he’s interested in facing, Khan won’t have to look hard to find a suitable replacement opponent for him to battle on July 12. Former IBF welterweight champion Kell Brook (38-2, 26 KOs) would likely step in to face Khan in a second if asked. Brook, 33, has been pushing for a fight against Khan for the last 10 years without success.

If Khan wants to finally give his loyal boxing fans what they’ve been waiting to see for many years, then he use this opportunity to face Brook next month in Saudi Arabia. Brook obviously isn’t the same fighter he once was, but he’s a HUGE upgrade to over Goyat.

Here are some other good options for Khan:

Adrien Broner: If Khan wants a fairly big name that might pull in visitors for the Saudi Arabia card, then he can’t go wrong with Broner. However, it might be difficult for Khan to get Broner to agree to accept the same money that Goyat was offered. Besides that, there would be a risk of Khan losing to Broner.

Josh Kelly: This is a slick fighter with Olympic experience, but not much in the way of power to speak of. Kelly would be ideal for Khan. Again, it would be a risky fight for Khan, who has designs on facing Manny Pacquiao in November. Kelly might ruin Khan’s plans of a fight with Pacquiao.

Jeff Horn: This is a great choice. Horn can punch, and he’s well known in the boxing world.

Josesito Lopez: Khan would need to be careful against a puncher like Lopez, because this guy would be swinging for the fences all night long against Khan. On the positive side, Khan vs. Lopez would be entertaining if nothing else.

Andre Berto: The former IBF/WBC welterweight champion Berto would give Khan a well recognized opponent that would get the attention of the boxing world in a way that Goyat failed to do. Overnight, Khan’s July 12th fight would be taken a little more seriously by fans. Berto is pretty old and well past it at this point in his career, but he’s world’s better than Goyat, who was just an awful choice for Khan.

Kerman Lejarraga: This guy hits too hard, so it’s unlikely that Khan would consider him for even a second. Nonetheless, Lejarraga would make it interesting.

Jesse Vargas: It’s unlikely that Vargas could make the 147 pound limit for a fight with Khan, but he would probably agree to the fight. Khan would probably need to agree to either a catch-weight or a fight at 154 for a Vargas to be a realistic option.

David Avanesyan: This is a winnable one for Khan. Avanesyan can’t punch, and he’s more of a fringe level guy at best. This guy would be an excellent replacement for Goyat.