Joshua to finalize rematch with Ruiz Jr. next week 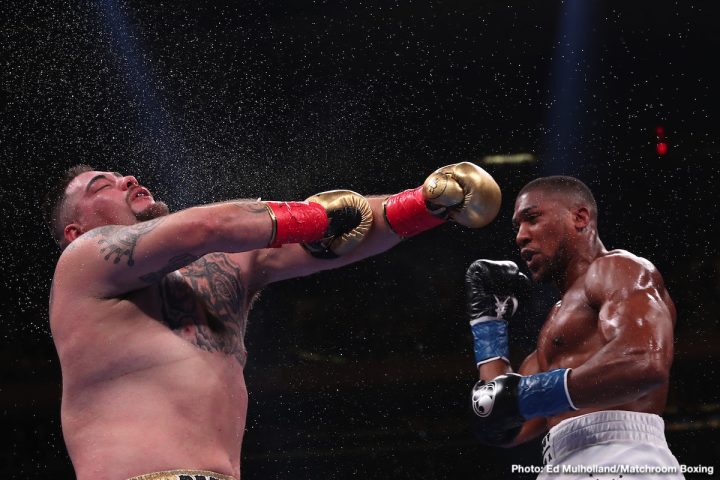 By Charles Brun: Eddie Hearn will be finalizing the rematch between Anthony Joshua and Andy Ruiz Jr. next week for between November 16 and December 14 in either the UK or the United States. He says Joshua (22-1, 21 KOs) is interested in “putting it right” back at Madison Square Garden in New York where he lost to the American Ruiz Jr. (33-1, 22 KOs) earlier this month on June 1. However, Hearn is still hoping that Joshua will decide to stage it in the UK, which he feels is the best place for it to take place. Joshua is the ultimate decider of where the contest will be staged.

The significance of staging Joshua vs. Ruiz Jr. rematch in UK

Taking the Joshua-Ruiz Jr. rematch to the UK would mean that Joshua’s takeover of the U.S was an utter failure. He was supposed to win over the boxing fans in the United States, and instead he’ll be going back to the UK being seen by some as having failed to accomplish his mission. Joshua’s promoter Eddie Hearn doesn’t seem to mind. He wants the rematch back in the UK. As the saying goes, ‘Just win, baby.’

Heavy underdog Ruiz Jr. shocked the boxing world in dropping Joshua four times before stopping him in the seventh round. Hearn had a rematch clause in the contract that he triggered at the request of Joshua to force an immediate second fight. The rematch was absolutely pointless aside from it giving Joshua the power to say when and where the fight will take place. The rematch clause also appears to spell out the purse splits for the rematch. Ruiz has been talking about wanting $50 million for the second fight if he has to fight Joshua in the UK. Hearn has made it clear that’s not going to happen, because everything is in the contract already.

If the Joshua-Ruiz rematch takes place, Wembley Stadium in London is a strong option for the fight to be staged. Joshua, 29, likes that venue after twice fighting there recently in matches against 40-year-old Alexander Povetkin and 40-year-old Wladimir Klitschko. It’ll be interesting to see Joshua finally face a young fighter at Wembley in 29-year-old Ruiz Jr. instead of the old timers that he fought in the past at that venue.

“The job over the next week is just to finalize the details now of just where and when that will be,” Hearn said to Sky Sports News. “I don’t know other than, between November 16 and December 14 will be the date of the fight. We’ve had offers from five different countries to stage the fight. For me, it’s a straight decision between the UK or America.”

It’s pretty obvious that the Ruiz vs. Joshua 2 fight will be taking place in America or the United Kingdom. It doesn’t make sense to stage if anywhere else, and there’s little chance that Joshua and Hearn would ever agree to let the fight take place in Mexico. By going back to New York, Joshua will have the advantage with the crowd like he did the last time he fought Ruiz.

The crowd appeared to be filled with Joshua supporters from the many thousands of Brits that traveled to New York to see him defend against Ruiz. But if the rematch were to take place in Mexico, Joshua would be fighting in front of a pro-Ruiz audience, and that would be a different situation. Fighting in New York is the equivalent of Joshua in the UK, because the crowd will almost surely be predominately British boxing fan that have made the trek from the UK to watch the fight live.

Hearn makes it out like Joshua is the visiting fighter when he faces Ruiz in New York. That’s not the case in terms of the audience. Joshua has most of the fans in the audience, because Ruiz’s fan base is is in Southern California. If Hearn and Joshua wanted to show some real courage, they would agree to stage the fight in Los Angeles, California so that the crowd would be more split 50-50 instead of 90% Joshua fans like we for the Joshua-Ruiz fight earlier this month.

Joshua must fight Ruiz in the U.S if he wants to win over fans in America

The whole idea of Joshua fighting in the United State earlier this month was an attempt to win over the American boxing public with his fights. Ruiz Jr. spoiled Joshua’s coming out party by knocking him out in the seventh round, and that ruined things for AJ and Hearn. If Joshua is going to go running back to the UK for the rematch with Ruiz Jr., then that would mean that he’s given up on the idea to win over the U.S boxing public.

Hearn either doesn’t understand the significance of Joshua having lost in the U.S or doesn’t care. Eddie obviously wants Joshua to win at all costs, and not suffer another loss to Ruiz, which could end his days as a huge money fighter in the UK. Joshua is looking at things in a more strategic way, because he realizes that has no choice but to travel back to the U.S for the rematch.

Staging the rematch in the UK won’t help Joshua redeem himself in front of the U.S boxing public that he’s trying to win over. By going to the UK, it gives the appearance that Joshua needs to be in the safe confines of home for him to beat Ruiz. Joshua has some controversial things happen in the UK in some of his fights in which referees have tainted a couple of his victories.

“Anthony feels as though it would be special to rewrite history and get the win at Madison Square Garden,” said Hearn.

If Hearn gets his way in staging the Joshua-Ruiz rematch in the UK, then the American fans are going to see it as a weak move on Joshua’s part. From Hearn’s perspective, he’s obviously doing everything he can to keep the gravy train going.