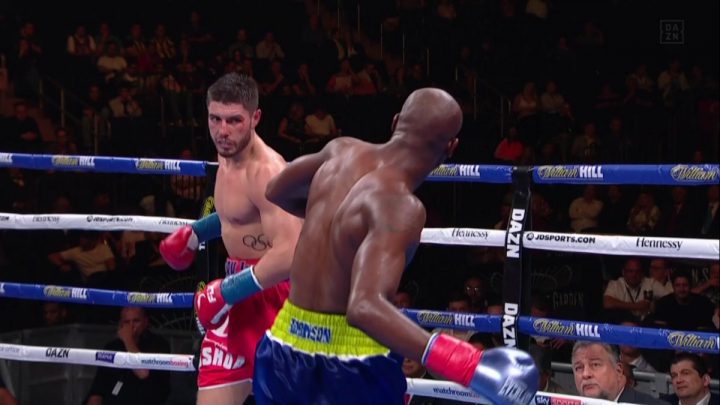 By Scott Gilfoid: Josh Kelly thinks he did just enough to deserve the win against fringe welterweight contender Ray Robinson last Saturday night in their 10 round fight on the undercard of Anthony Joshua vs. Andy Ruiz Jr. at Madison Square Garden in New York.

The 2016 Olympian Kelly, 25, says he watched the replay of his fight with the 33-year-old Robinson (24-3-2, 12 KOs), and he saw himself winning by a six rounds to four score. This writer disagrees with Kelly’s assessment. Kelly clearly didn’t do enough to get the victory, given the way he fell apart physically in the second half of the contest. Kelly looked winded, frustrated and mentally flustered from the nonstop pressure Robinson was putting on him.

Not gunna do overtime on this fight but have watched it now multiple times and judging as hard as I could against myself I felt I won the fight fair and square (close I could have boxed better but a win) 😥….a lot of things to improve on but for 10 fights in, competing at fringe world level I don’t think it’s that bad…. only thing I could say is I should have that W on the record…. we live we learn we move on support has been none stop and messages have been amazing 💚🙏🏽 time to tune out for a bit now #PBK 🕺🏽⏳🙏🏽

Kelly unable to see how bad he looked against Robinson

It seems like Kelly is in denial about how bad he looked against Robinson. This is kind of sad. When a fighter doesn’t understand how poorly they fought, it’s frequently difficult for them to improve on their mistakes. Is is stubbornness on Kelly’s part to see how horrible he was against Robinson or is he simply biased?

These are the flaws that Robinson exposed in Kelly’s game:

– Poor defense due to his low guard

– Spending too much time backed against the ropes

There’s so many flaws in Kelly’s game that this writer doesn’t even know where to begin. If it was just one or two things, you could argue that Kelly could fix the problems, and come back again to beat Robinson in a rematch. But Kelly has too many vulnerabilities that would make it a bad idea for his promoter Eddie Hearn to throw him back in the ring with Robinson. If Kelly were a boat on the ocean, he’d be springing leaks everywhere and floundering. There’s too many holes in Kelly’s game for him to be put back in with Robinson with confidence that would win that fight without controversy.

It would be frightening to think of Kelly facing a talented welterweight contender like Yordenis Ugas or Danny Garcia. That would be a bad idea for Kelly to get anywhere near those type of fighters. The thing is, Kelly doesn’t look like he’ll ever be at the level to beat those guys. Heck, even light welterweights like Regis Prograis, Josh Taylor, Jose Ramirez, Ivan Baranchyk, Pablo Cesar Cano and Viktor Postol would all likely do a number on Kelly right now. He’s an easy mark for those type of fighters in this writer’s opinion.

The most obvious flaw that Kelly showed in the fight was the way that he was getting nailed by clean shots from Robinson. Kelly’s nasty habit of trying to showboat by fighting with his hands down proved to be a mistake, as he was getting hit cleanly by Robinson’s shots from start to finish. There were a lot of punches that Kelly could have blocked if he’d had his hands up. It looked bad when Kelly would get hit by Robinson, because his hands were al

“Obviously, I’m disappointed,” said Kelly to Sky Sports News about his performance against American Ray Robinson last Saturday night. “I watched the fight back this morning…I scored it 6-4 in my favor. I thought I just edged it out with the clean shots, especially in the last couple of rounds. I got lost in the mid-rounds, but I think I done enough early and late on to take the fight. It’s all perspective, it’s judging at the end of the day,” said Kelly.

Oh my, Kelly isn’t willing to see his flaws, is he? Oh well, Hearn might as well put him in with one of the talented contenders in the welterweight division so that he can find out how much improvement he needs to make before he can mix it with the best. The thing is, Robinson is just a fringe contender at best. He’s not one of the elite level fighters at welterweight. You can’t put Robinson in with the likes of Ugas, Garcia, Josesito Lopez or Jessie Vargas and expect him to beat those types of talents. Yeah, Robinson fought Egidijus Kavaliauskas to a 10 round draw last March, but that’s a flawed fighter that arguably shouldn’t be ranked at #1 by the World Boxing Organization. That ranking is based on fluff wins by Kavaliauskas.

“So if you’re talking on those levels and it’s only my 10th fight, we can take positivity away. It’s looking good,” said Kelly.

It doesn’t matter if it was Kelly’s 10th fight or his 100th. The flaws that Kelly showed against Robinson will still likely be there even when he gets into his 30th or 40th fights. Kelly is never going to have punching power, hand speed or reflexes. His ring IQ is highly questionable with the way he retreats to the ropes and just covers up like a sparring partner. That problem is likely tied in with Kelly’s stamina issues. He doesn’t have the gas tank for the elite level.