Dubois: It Will Be D-Day When I Land On Gorman 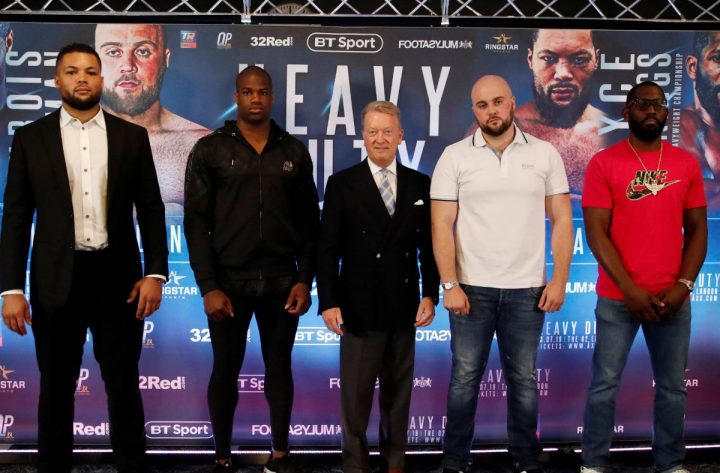 DANIEL DUBOIS will be having his own D-Day celebrations if he wipes out Nathan Gorman next month.

While Britain remembers the 75th anniversary of the D-Day Landings today, Dubois will be in the gym preparing for his own military operation against bitter rival Gorman.

Dubois said: “We’re in the hurt business and that is what I look forward to doing to him on fight night.

“I think Nathan is gonna be my easiest fight so far and after I’ve got him out the way I’m after Joe Joyce and whoever is left.

“I have got what it takes to deal with him and it will be easy. I’m here and will get the job done. If I hadn’t shown my skills so far I wouldn’t be here.

“To go in the record books as British champion is something else and a step towards being top of the division. I don’t care about liking Nathan.”

The men Hall of Fame promoter Frank Warren brands; “The best heavyweight prospects in the world,” go to war for the vacant British heavyweight title at The O2, London on Saturday July 13, live on BT Sport.

Dubois (11-0, 10KO) has been goaded by Gorman during the build-up to their fight with the Nantwich man claiming he mastered him in more than 200 rounds of sparring when they were amateurs.

Londoner Dubois has vowed to make Gorman (16-0, 11KO) pay for those claims when they slug it out.

He added: “It is completely irrelevant and I have changed a lot as a professional. It has allowed me to breathe as a fighter and understand more about boxing.

“I have got experience now and from the day I started boxing being heavyweight champion of the world was always on my mind.

“I have the advantage over Nathan in speed and power which plays a massive advantage but there is a lot more to me as well.

“I can match any of the fastest heavyweights out there and I am ready for a fight.”

HALL OF FAME promoter Frank Warren held a press conference in London today ahead of his blockbuster ‘Heavy Duty’ card at The O2, London on Saturday July 13.

Here are a selection of quotes from today’s press conference:

“These fights are going to be fireworks. These are big guys, big punchers and we saw at the weekend in Anthony Joshua v Andy Ruiz when heavyweights let bombs go anything can happen.

“The heavyweight landscape hasn’t changed at all after Ruiz’s win. The number one heavyweight in my opinion is Tyson Fury. He beat Deontay Wilder, but they gave a draw.

“The winners of these two fights has the opportunity to become a world champion and will be in the top five.

“Would I be worried put these guys in with Dillian Whyte? I would make the fights in a heartbeat.

“This is Joe’s tenth fight and although he had great amateur experience, this is a big, big test against Bryant who isn’t here to sit down.

“Daniel v Nathan is a pick ‘em and it doesn’t get any better than this fight. They want to go to the next level and one is in the way of the other.

“How many fighters take these risks at this stage of their careers?”

“Whatever he (Gorman) has to say or thinks happened in the past when we sparred has no bearing on this and I can’t wait to show what I can do.

“It is completely irrelevant and I have changed a lot as a professional. It has allowed me to breathe as a fighter and understand more about boxing.

“I have got experience now and from the day I started boxing being heavyweight champion of the world was always on my mind.

“I have the advantage over Nathan in speed and power which plays a massive advantage but there is a lot more to me as well.

“I can match any of the fastest heavyweights out there and I am just ready for a fight.

“This fight will add recognition to my name and I can move on. The big goals are within my reach and I’m really excited.

“I didn’t pay too much attention to Joshua v Ruiz as I thought it was a formality for Joshua.”

“It is a fight I have wanted from the day I turned professional and I am counting down the days.

“I know what kind of fight it is going to be. We know each other inside out and I know what he brings to the table – it is an exciting fight.

“We were on the GB squad together for two to three years. We sparred hundreds of rounds and in each spar we wanted to do damage. I felt I never lost a round sparring him.

“He knows he isn’t faster than me. We will see on the night, but he knows deep down exactly what it is.

“Daniel is a good fighter, but my style beats him and I fully believe that.”

“The juggernaut is here. I throw a lot of punches, throw punches with force and Bryant is going to get run over.

“I have had a brief look at what he brings and we have started to dissect his performances on where I can capitalise.

“I am superior in stature even if he has a freaky reach. I cannot wait and there are going to be some heavy hits.

“I didn’t see the Ruiz performance coming. I was gonna have money on Joshua round four, but big respect to Ruiz.”

“Joe could have easier options, but right now he needs a competitive fight although in my opinion there is only one winner.

“Bryant is always in shape, has a great diet, lives a good life, but that and the six pack cant save him. He will get Falafel wrapped and it will end very badly for him.”

“The UK has been one of my homes. I come here often, but this is my first time fighting. I am not here to lay down. I know a win puts me back in the mix.

“I had a fight lined-up for this month, but this offer came and I quickly accepted because it is a high quality fight.

“Do I want a nobody or Joe Joyce? It is high risk and big reward. I am always confident.

“If I didn’t come here with confidence it wouldn’t make a great fight. This is real.

“I saw the Ruiz performance coming because Joshua doesn’t have great defence and I knew the good things Andy can do. He has fast hands, is elusive and deceiving.

“I knew it was the bad style match up for Anthony the way I am for Joe.”

Adam Smith: “If Joshua loses to Ruiz again, he’ll have to take a long look at his career!’ »