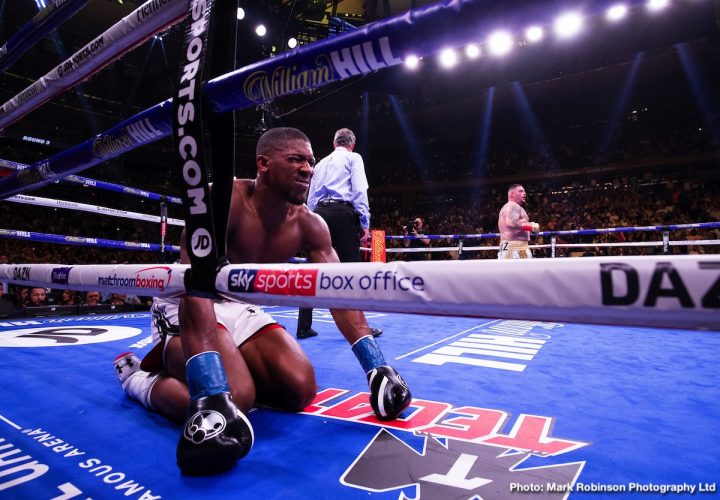 By Scott Gilfoid: Oscar De La Hoya says he always felt that former heavyweight champion Anthony Joshua had a “suspect chin, and sure enough, that turned out to be the case recently with massive underdog Andy Ruiz Jr. knocking him out in the seventh round on June 1. Ruiz exposed Joshua’s weak punch resistance, according to De La Hoya.

No matter what Joshua (22-1, 21 KOs) tries to do to fix his vulnerable chin, De La Hoya doubts that he’ll be able to accomplish that near impossible task. De La Hoya says, “some fighters just can’t take a punch.”

Joshua wants a rematch with Ruiz Jr. (33-1, 22 KOs) later this year in November or December to try and win back his lost IBF/WBA/WBO heavyweight titles, but he could be up the creek without a paddle. The boxing world has tried to warn Joshua about taking the immediate rematch with Ruiz, but he’s not listening. Joshua is stubbornly on cruise control, steering his ship straight ahead to what could be disaster for him in facing Ruiz Jr. a second fight.

AJ won’t even entertain the thought of giving his trainer Rob McCracken the boot, even though a massive amount of fans recommend that he do so. The fans want to help save Joshua from himself, but he’s not listening. He’s already decided to stay loyal to McCracken.

“I’ve always felt Joshua has a suspect chin. I always said if Ruiz Jr. can connect with his punches, he can do damage and hurt him,” said De La Hoya to Villain Fy Media. “Joshua has to try and redeem himself. Ruiz is now the man. That’s the bottom line. There’s fighters that just can’t take a punch. It happens,” said De La Hoya in commenting on Joshua’s punch resistance.

This is kind of interesting what De La Hoya says about Joshua’s chin or lack there of. Joshua and his promoter Eddie Hearn of Matchroom Boxing might not take what De La Hoya is saying seriously right now. But they’ll surely be more concerned if Ruiz scores a second knockout later this year in the rematch.

De La Hoya advises Joshua to work on his defense

It’s going to be difficult for Joshua to fix his poor chin, according to De La Hoya. He suggests that Joshua work on his defense in hopes of limiting the amount of heavy shots that his opponents hit him with.

“It’s hard,” said De La Hoya when asked if Joshua can fix his poor punch resistance. “It’s really hard. Obviously if you work on your defense, and not get hit. It happens in boxing. He [Ruiz] tagged him. You can’t build a chin. It’s just impossible.”

Unlike a lot of fighters in the heavyweight division, Joshua doesn’t move well around the ring. It’s not going to be easy for him to work on his defense, because he lacks the foot movement to help him stay out of the way of incoming shots. Further, Joshua has never been good at picking off shots on his gloves and arms. You have to suspect that he’s not going to all of a sudden improve with his defense, because it take years for fighters to develop their defensive skills.

For Joshua, his offense has always been his defense. He’s never had to worry about his opponents’ offense, because he was keeping them busy defending against his own power shots. Ruiz studied Joshua’s past fights, and determined that he had problems with fighters that threw sustained combinations. Ruiz took advantage of that flaw in Joshua’s game by working him over from round three until stopping him in the seventh round.

“I’ve always said Joshua is the best heavyweight, and he just knocked him out,” said De La Hoya. “Styles make fights, but Ruiz is sneaky powerful, and sneaky fast. People were making fun of him, [saying] he has no chance. In boxing, you can never count out anybody. He [Joshua] didn’t know what hit him. I’m happy for him [Ruiz]. If you have a guy you think you’re going to beat easily; Ruiz came in and Joshua said, ‘This guy, come on. I’m going to take him out easy.’ So mentally it kind of does something to you. It kind of disables you,” said De La Hoya.

It could be that De La Hoya is correct about Joshua overlooking Ruiz, and not taking him seriously as a threat to him. Even so, Joshua should have been able to turn things around after he was knocked down twice in the third round. That was a wake-up call for Joshua to get mentally engaged in the fight. Joshua didn’t do it though. He continued to get belted around the ring by Ruiz, and he never adapted to what he was doing. You can blame on Joshua or his trainer McCracken.

“The other aspect is Ruiz came to fight, and he knocked him out,” said De La Hoya. “Ruiz is now #1. He’s the man, there’s no doubt about it. Ruiz, I’m pretty sure, is going to be fighting the very best. Ruiz is the undisputed heavyweight champion of the world,” said De La Hoya.

The victory for Ruiz Jr. puts him at the top of the heavyweight division, and Joshua is now just one of many contenders. The speed with which Joshua has fallen from being viewed as an unbeatable superstar to that of a B-side player was lightning fast. No longer is Joshua seen as the #1 heavyweight in the division. Joshua is now at risk of being sent into retirement if he suffers a second devastating knockout loss to Ruiz. Unless Joshua can improve his chin, he may be doomed.